we've discussed the bean's obsession with BTS, right?  it rivals her sister's love for the jonas brothers, that's for sure.  and both of them definitely overshadow my own teenage adoration of duran duran, as much as i hate to admit it.  hahaha...i've raised a couple of serious fangirls.  i'm so proud.

anyway, i was really amused to learn that my own friend lilcee is also a member of the BTS army.  even more so when mini cee proudly announced that she...is not.  comedy.  it makes for interesting conversations when we get together, and a couple of months ago we planned an outing centered around the BTS love.  apparently there are people who will organize a big celebration when it's one of the band members' birthdays, usually held at cute boba shops in and around the l.a. area.  we decided to head out to koreatown's dragon boba for one such celebration, on the birthday of kim namjoon - also known as RM, the "rap monster" of the group. 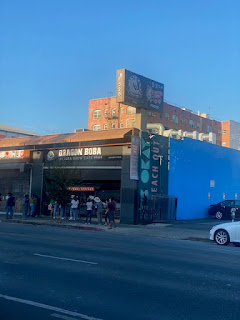 although we got there closer towards the end of the day, there was still a pretty good-sized line to get inside.  and there were vendor booths and a dance party going on in the adjoining parking lot - i'm sad to say that i didn't get any pictures of any of it.  luckily, the line moved fairly quickly and as we got closer to the front a couple of giggling girls came up to us to offer free photocards - literally little cards with individual band members printed on them.  and when you're asked "who's your bias?" you answer with the name of your favorite one.  for the bean, it's always jimin.  and i should probably be embarrassed to admit this, but i actually have an answer to this question as well - it's V.  heh.  here's what they look like (and this is jimin, btw). 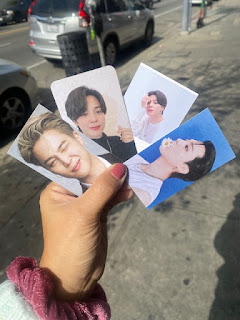 this was the special menu for the day: 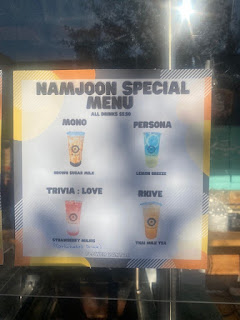 and mmmm...mochi donuts.  i never turn down an opportunity to scarf one of those bad boys down. 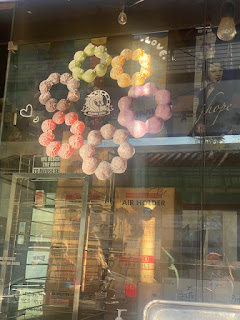 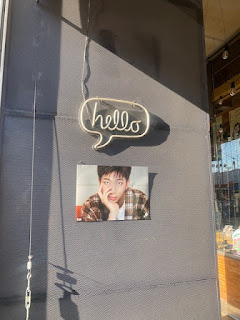 i'm not sure if these banners are always up or if they were put there for this momentous occasion.  the bean was in k-pop heaven though. 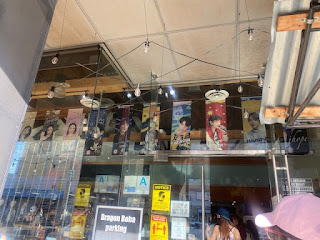 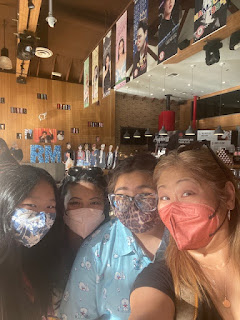 look how cute their treats are! 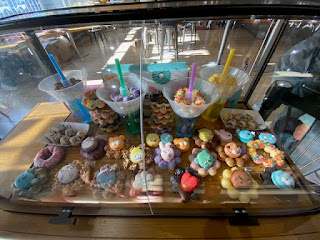 and the whole store was all decked out in honor of RM. 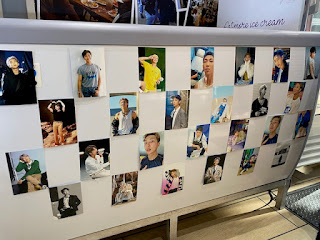 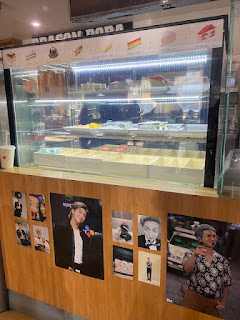 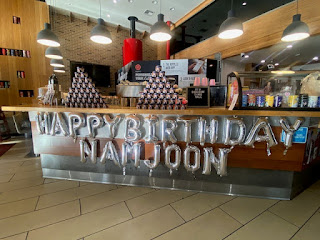 these events usually involve special cup sleeves that are apparently a collectible amongst fans.  they had a whole bunch of them with all the band members and you could choose which one you wanted when you ordered your drink. 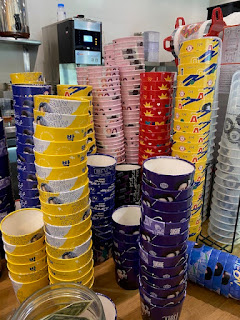 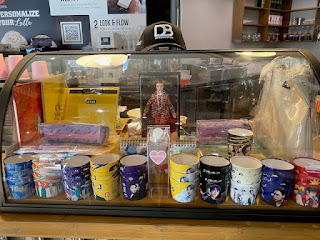 while we waited for our drinks to be ready, we hit up the photo op.  i asked the bean if she would want one or two of these life-size cutouts in her room like her sister used to have, but she looked horrified at the idea.  i guess there's a limit to her level of fangirl. 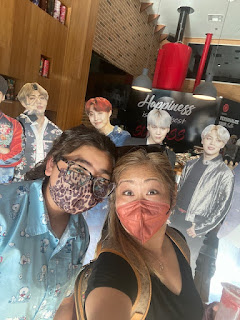 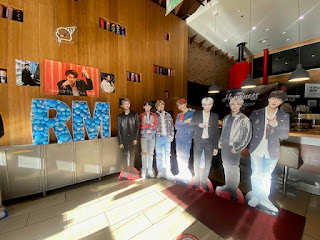 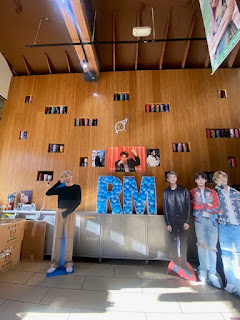 while the bean had gone with her usual boba order (brown sugar milk tea), i'd opted for something different.  this is the strawberry milkis drink, served with popping boba that's equal parts delicious and bizarre. 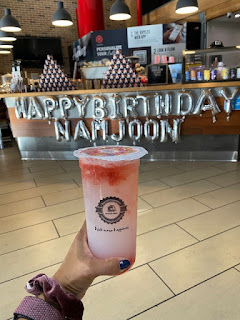 of course, we'd ordered a few treats as well.  the macarons were just too cute, and the bean loves crepe cake.  i had a mochi donut, but i must've devoured it without a picture.  how very unlike me.  i must've been hungry. 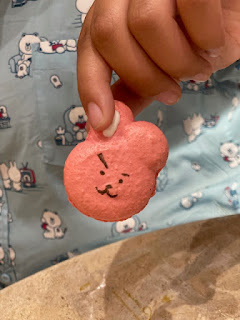 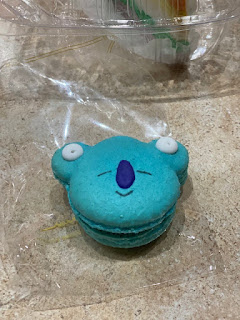 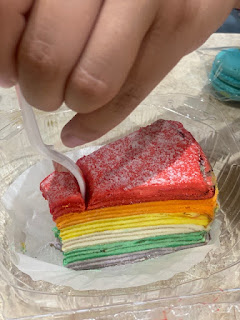 a couple more photos before we finally left: 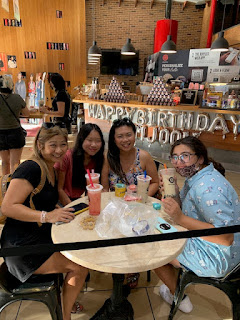 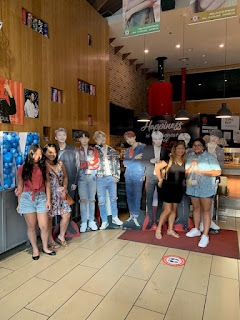 when in k-town, it only makes sense to have korean bbq.  we headed to one of the higher-rated spots and i recognized it as the same one that the hub took us to about a year or so ago.  it was just as delicious as i remembered. 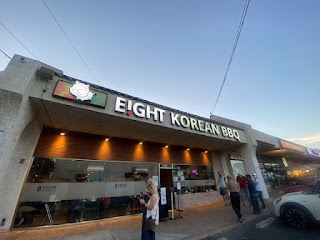 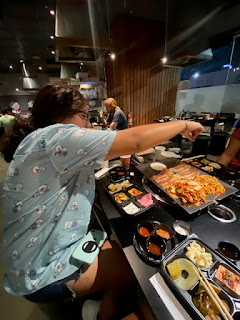 and then for dessert, we headed back towards dragon boba, only this time we went to their neighbor: 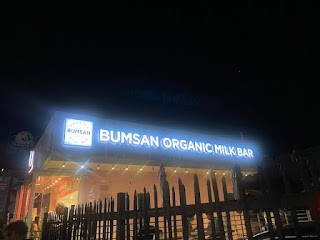 we were intrigued by the soft serve ice cream and their "croffle" - a croissant coated in sugar and cooked in a waffle iron. 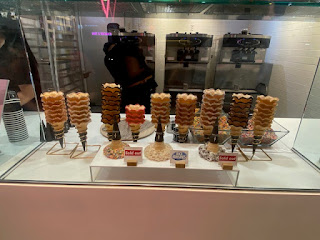 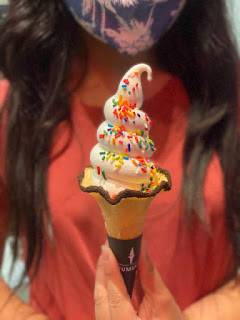 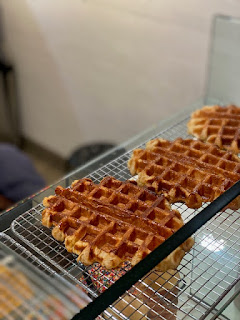 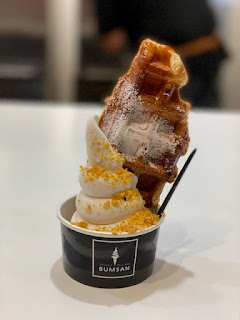 it was just as delicious as it looks, and made for a perfect way to end our day in k-town.
at December 02, 2021