So I hit the CHA show this weekend - which stands for Craft & Hobby Association.
While the thought of a craft & hobby trade show may make some snicker (or perhaps simply go into mirthful convulsions), I was really excited to go. On Saturday, I dragged my friend A, who loves paper and crafty things as much as I do, and off we went to the Anaheim Convention Center.
We'd analyzed the show's website and were going on the day that featured education and workshops. We skipped over the boring (and expensive) seminars and packed bags with the required supplies.
And then we got there and were so, so bummed to see that the workshops weren't only booked solid, but pricey as hell. Damn. The trade show wasn't even ready yet, and each entrance was blocked by folks sporting red jackets and slightly menacing looks. Well, as menacing as a 65-year-old retired lady looking for a bit of extra cash could look, anyway. We giggled at the hordes of folks trucking through the convention center lugging their rolling suitcases and checked out what we could, which wasn't much.
So instead, we traipsed over to the Hilton, found a Starbucks (how convenient!), and proceeded to sit down and chat. For two hours. The lobby of the Anaheim Hilton, we discovered, had ample seating in every nook and cranny, and it was COMFY. Obviously. We sat and talked until we were ready to explode from the coffee, and then we bid the show farewell and headed off to Downtown Disney to grab some lunch.
After walking the length of the part of the Disney Resort that's free (and it ain't that long), we settled on Rainforest Cafe for lunch. But not before we'd spent a little time in a cute little boutique called "Disney Vault 28". It was tucked in somewhere in the middle, and carried some really cute, really high-end Disney merchandise. Never thought I'd ever use those words in one sentence. They had vintage tees, tops that were bedazzled with sparklies, Tarina Tarantino accessories, and this: 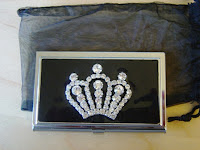 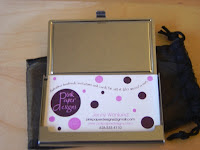 Oh, yes, girls. It's my new business card holder. It's princess-y and edgy at the same time, no? Just like me. *snicker*

So Part II of my CHA extravaganza is less exciting. I hit the show on Monday morning, arriving around 10:30. I paid my $9 for parking, grabbed my kate spade tote, took a deep breath, and made my way inside.
I can't even tell you how overwhelmed and truly excited I was. I looked around in awe at the giant signs throughout the ginormous exhibit halls that sported the logos of all my favorite craft supply companies, and I realized I was standing there with my mouth open and a glazed look on my face. Not pretty. And quite embarrassing, as others who were so obviously show veterans maneuvered their rolly-cases around me and chuckled.
I spent SIX HOURS walking through the booths. SIX. I didn't break for lunch, I didn't go potty, I didn't sit down once, I didn't grab any overpriced snacks that were so conveniently available every few feet. I picked up so many catalogs and did so many "make and takes" (freebie craft activities at most booths in an effort to plug their new lines and make some sales) that I ended up going back to the car 3 times to drop stuff off. I thought of how A and I cackled at those rolling suitcases and actually said out loud "damn, ain't karma a bitch."
I was so exhausted and hungry by 5:00, when the show closed, that I briefly considered finding a spot on one of those comfy couches at the Hilton and taking a nap. Instead, I took one last look around, eyeing the booths that I'd managed to miss even after having spent so much time there, and headed out. Thankfully, there wasn't much traffic, and I got home in less than an hour.
I did stop at CVS on the way home for some essentials, and when I got back in the car I realized why I'd been getting strange looks from customers and employees alike: I'd forgotten to take off my badge that was adorned with buttons, flowers, an "I love my Xyron" pin that lit up, and proclaimed me a "Professional Crafter". You'd think I was kidding, but: 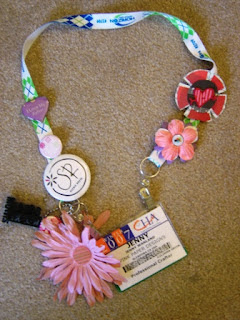 Two days later, I'm still sore from lugging the catalogs around and tired as hell. That's gotta count as a workout, right?
at January 31, 2007