i love that my mom and i both celebrated milestones this year.  my birthday is just a little more than a month after hers, and while i had no idea what we were doing to celebrate, i was super excited to find out.  all i knew was that i was going to spend the day with the hub, meet up with the kids for dinner and spend the night somewhere because i was told to pack a bag.

i started the day off with a workout on the peloton, which offered a birthday greeting when i logged in: 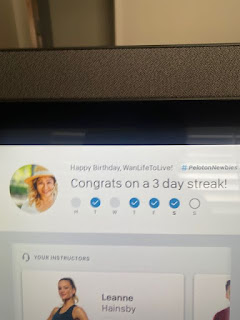 and then when i finished my ride, i noticed something else.  ouch, man - that peloton software is no slacker when it comes to updating the basic info.  i know it's all in the software or whatever, but still...dang. 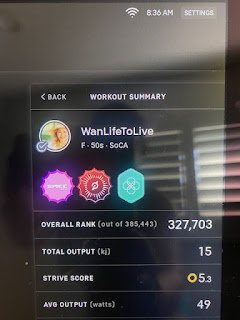 the bean presented me with her sash when i emerged from the gym, which made us both laugh. 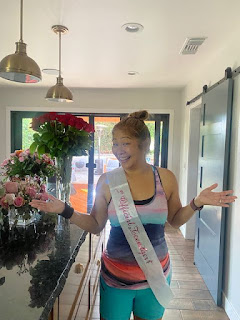 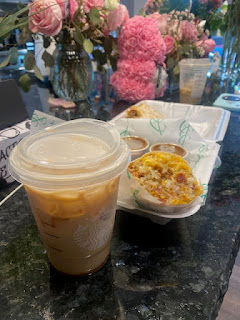 after i got myself cleaned up and ready for - well, anything - we put our bags in the truck and headed off to parts unknown (to me, at least).  i wasn't too surprised to find that we were heading towards the west side, since that's where all kinds of shenanigans can be found.  the hub parked the car in a lot just off of rodeo drive (in a spot marked with my favorite number - my birthday, of course): 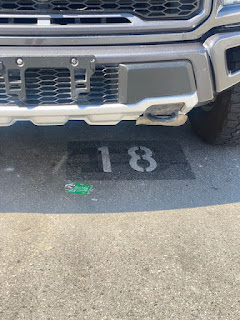 and steered me into this shop. 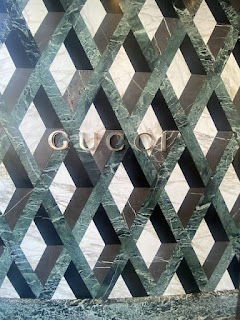 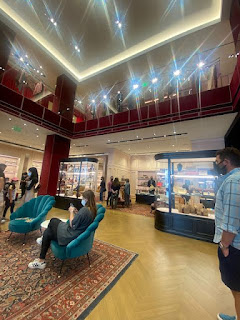 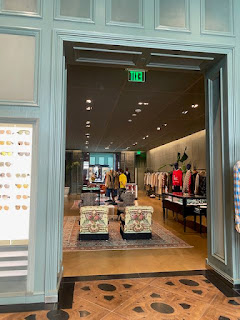 how much do i love these chairs??  like, i want them in our house.  heh. 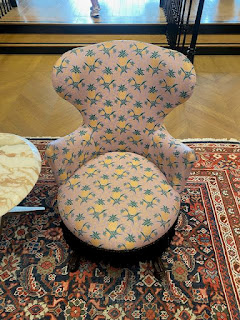 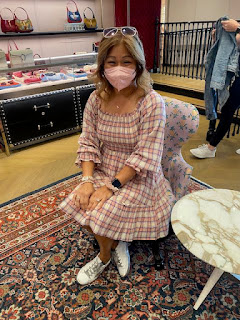 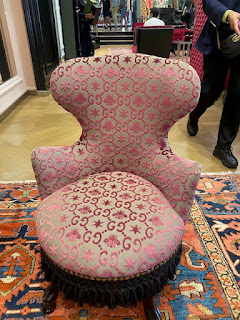 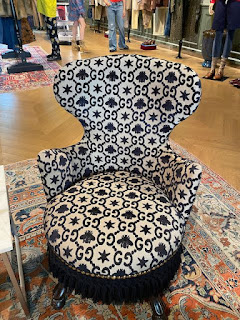 i got to pick out my birthday present, and i just realized that i don't have a picture of it.  oops.  but this bag contains an adorable little gucci wallet, and a second bag that the hub carried out for me held the tote i'd been eyeing for awhile. 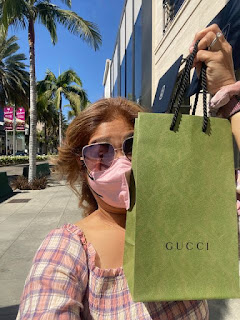 from there we drove through typical weekend westside traffic and pulled in here: 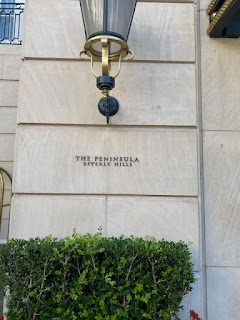 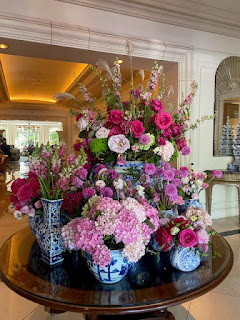 we found our way to the restaurant and got seated outside on the patio. 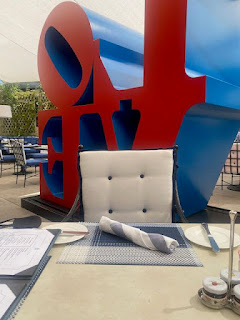 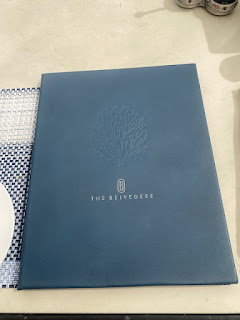 i ordered a really lovely refreshing cocktail, because why not? 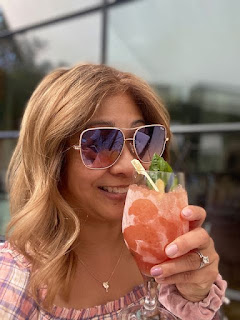 we shared the lobster and caviar flatbread, and it was as delicious and decadent as it sounds. 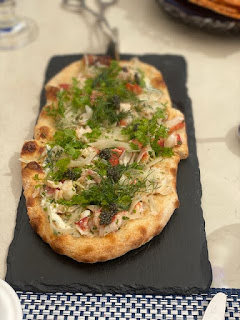 i went with something light for my entree - the charred caesar salad with grilled shrimp. 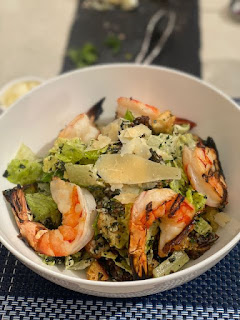 and then as soon as we were done, we stepped into an elevator that took us up to the fifth floor where the hub left me in the capable hands of the spa staff for a relaxing facial.  my only concern was that meant i'd have to redo my makeup from scratch at some point before dinner, but at least i knew i'd packed everything in my overnight bag.  such a dilemma. 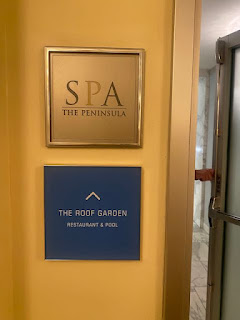 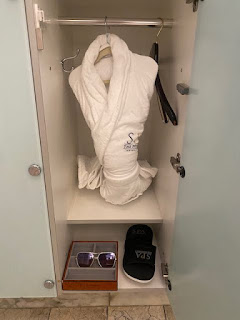 i may have pocketed one of the brushes from the locker room, which i knew was going to come in handy since i'd forgotten mine.  muahahahahaha. 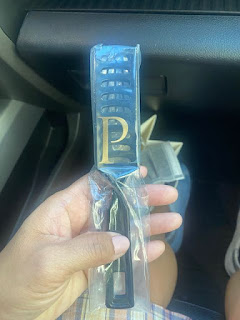 the facial was wonderful, and between the cocktail and the fabulous spa treatment i could easily have gone for a nap.  plus we were driving on surface streets at a leisurely pace as we headed back east, and anyone who knows me knows that riding in the car for any length of time beyond like 5-10 minutes puts me to sleep almost every time.  the hub found an alfred coffee, so we stopped for a little pick-me-up. 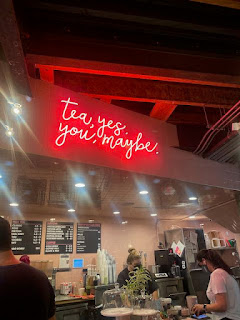 as we sipped on our coffees we continued to make our way east, which made me wonder where we were headed next.  it was getting later in the afternoon, and i knew we still had to check in somewhere and get ready for dinner with the kids.  the hub had taken me shopping for something fun to wear on my birthday the week before, so i knew we were going somewhere pretty nice.  once we found ourselves in glendale, i kind of had an idea of where we could be headed.  but then it got a little weird when he mentioned that we were running late, didn't have enough time to check into whatever hotel we were staying at before dinner and we were going to have to get ready...in the car.
eh?
and yet i still didn't really question anything or let my mind wander as to what could be going on.  i pretty much just shrugged and hopped into the back seat to change my clothes and get started on reapplying my makeup.  i don't even know why i didn't think this whole scenario was super duper weird, but i was still in the "i have no idea what's happening but i don't care because it's my birthday and it's going to be nothing but good" frame of mind.  and then my poor husband needed to find a restroom, which took us to a random parking structure in glendale behind a starbucks (because isn't that where everyone goes when they need a potty break?).  while he was gone i finished my face and then tried to plug in my curling iron...which of course wasn't turning on.  boo.  i'd done my hair that morning, but it got pretty flattened out during my facial.  i was a little bummed that i couldn't redo it and make it look cute, but i figured it was okay since we were meeting up with the kids and they wouldn't care what my hair looked like.
we continued on past glendale, and when we got off the freeway at lake avenue and headed south i knew exactly where we were going.  a few minutes later we pulled in here: 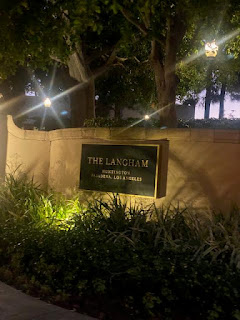 aaaaaand i'll tell the rest of the story tomorrow, because it deserves its own post.  i promise it won't be a whole week before i continue the birthday princess recap.  although if you paid attention to one of my previous posts you'll already know what happened next!
at November 03, 2021