it's a hard-knock life.

last week was quite a performance-filled time for the kid. on tuesday, she got to participate in the spring concert, which featured the bands and chorus groups throughout our school district. because she's a rock star, she'd chosen to play the drums. luckily for my sanity (and my checkbook), all this required was a set of sticks and a practice pad - not a full set of drums!
it was quite entertaining to listen to the kids play....especially as the four school bands had never practiced together even once. heh. our friend robert, who is a professional videographer, was set up in the back of the auditorium to capture the event for us and texted me with "awwww, some of these parents are mean. i heard one tell another "i don't want to be here." how sad!"
how sad, indeed. :(
thursday brought an even more nerve-wracking evening for the kid, as she'd been cast as a "dancing orphan" for her class' performance of two scenes from "annie". actually, she was one of the two choreographers, but i'm not one to brag. ;) they'd done a full dress rehearsal the day before, which i'd been able to see, and this was the BIG show in the city's performing arts center. after a rather comical beginning, during which the male "miss hannigan" had some microphone troubles, the girls pulled it off and ended with a triumphant bow: 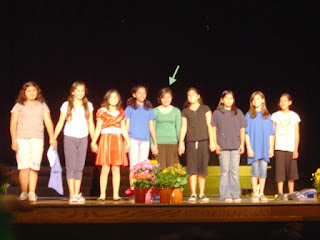 don'tcha love it?? if you've got 5-ish minutes to watch, the performance is here.