tequila and i are no longer friends

do you remember that meme going around at the end of 2019 that was hell bent on celebrating the fact that 2020 holidays fall on the perfect days, like cinco de mayo on taco tuesday?

and then lockdown started and it all went to shit.  heh.  but that's okay, because drinking at home means you don't have to worry about catching a ride when the party's over.  right?  there's always a silver lining.

since it's been a full week+ now, i can go ahead and share how my cinco de mayo went.  it all started out so nicely - being the day after star wars day (may the fourth...you know), it was "revenge of the fifth."  and so i threw on an appropriately-themed shirt for my zoom barre class: 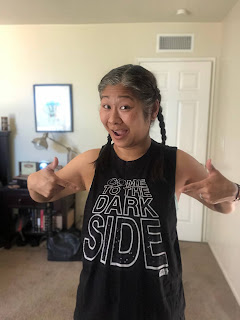 then i changed the background on my screen, because why not: 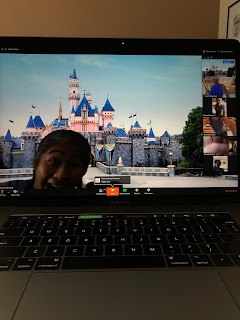 it was very well received by my instructor (and a few of my fellow barre-bies). 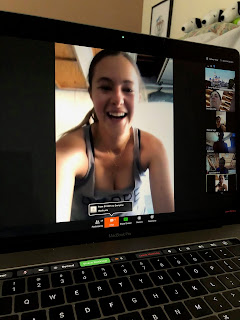 while the virtual class is only 3/4 as long as in-studio classes, they always manage to squeeze as much torture into those 45 minutes.  i'm just as sweaty and sore and tired at the end of it as i usually am, which is a good thing.  now that i think about it, i'm not exactly sure if it really is extra hard, or if i'm just out of shape.  huh.  oh well, it's still pretty awesome to be able to take classes during lockdown.  and to be honest, i kind of prefer it this way because i can just log on a few minutes before it's time instead of hopping in the car 20 minutes beforehand.  i can wear mismatched clothing, my hair is all wacked out, i always have the best spot in the room and i can collapse on the floor in an exhausted, sweaty mess and get up whenever i feel like it.  it's actually pretty fantastic.

for the special occasion, the local club was offering 32 ounce margaritas for curbside pickup, and the flavors of the day were jalapeño pineapple and watermelon. 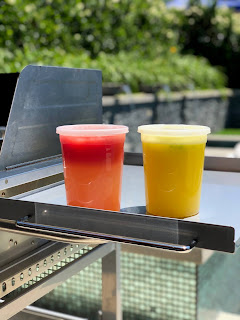 because i'm a dork, i poured mine into my star wars cup. 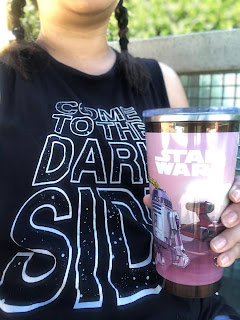 and before long, i'd made my way into the pool, sitting in one of our beach chairs under an umbrella with my drink and a cup full of cheez its.  you know, to soak up the alcohol in my belly.  yeah. 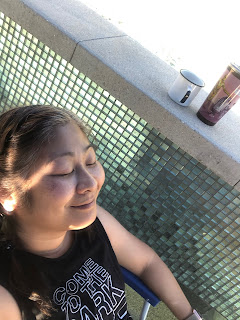 here's where it started to get a little fuzzy.  i'd only had a lunchable that day, along with those cheez its, and while i thought i was doing just fine sipping on that margarita i was very, very wrong.  i found this on my camera roll later, which i'd obviously drunk posted in my instagram stories: 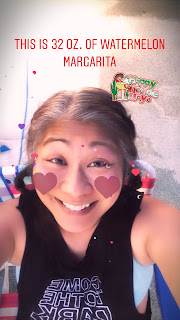 and i remember doing laps in the pool.  kinda.  really, it was more like me flailing from one end of the pool to the other atop a floatie and giggling the entire time.  and i have the hub to thank for this photo. 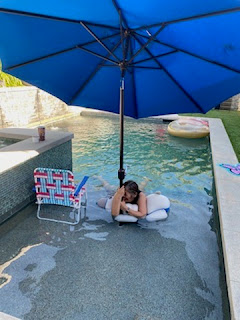 the bean has some pretty embarrassing videos of me too, which will NOT be shared.  yikes.  i do remember using her as a crutch at some point as i stumbled from the pool over to the couch, all the while slurring some unsolicited advice:  "babe.  don't ever drink tequila.  tequila is baaaaaad.  just don't do it."  oy vey.

when the spinning started i remember just flopping down and turning over and over, like a rotisserie chicken.  i fell asleep, which is my usual reaction to alcohol, but i knew it was bad this time.  the one thing i remember as i felt the puke coming on was muttering "where's the bean?  she can't see me like this."  and i could've sworn when i was handed my instant pot liner (!!!!) to barf into that it was already dark outside, but this photo (also thanks to the hub) proves otherwise. 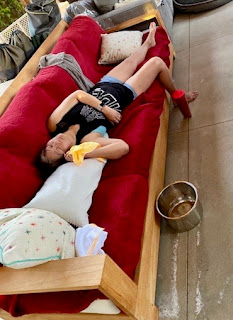 man...i never did get any tacos that day.  that sucks. and i felt like shit the whole next day.  AND the bean swears i flipped her off at some point, which i guess isn't completely out of the realm but is really terrible.  blarg.  would that be worse than seeing me plastered or watching me puke it up?  i can't decide.  i was telling the hub that i don't think i've gotten that trashed or barfed as a result in probably 20 years.

i finally got the watermelon smell out of my star wars cup, thanks to the magic eraser and leaving it out in the sun for a full day.  and all of the bottles of tequila and margarita mix out in the back yard are now safe from me.  mimosas never do me dirty like that...all they do to me is put me to sleep.

Email ThisBlogThis!Share to TwitterShare to FacebookShare to Pinterest
Labels: cinco de mayo, so not an alcoholic