one of the sweetest surprises EVER

one day last week, MIL texted me with a heads up to expect a package that she'd just dropped off at the UPS store, and ended it with "have fun!"  i figured that meant that maybe she'd sent us some games or some kind of fun activity to do, and then forgot about it until a couple of days later when a fairly large box arrived at the front door.  it was addressed to me, which i found slightly unusual, and i dug into it right away.

inside, i found this: 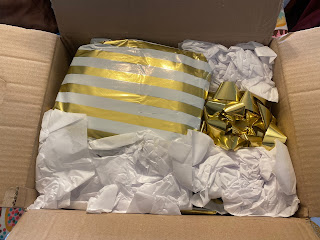 with a lovely note in MIL's pretty handwriting that explained it all.  and i was so touched, i had tears in my eyes as i read it.  what she'd done was to put together a birthday countdown - even though it isn't until september, it's my 50th and a pretty big milestone.  there's a card to open each month, and an assortment of 20 wrapped presents...although per her letter, it was up to me as to how i wanted to handle it.  she also made sure to note that there were at least three chocolate-themed gifts so that i'd know to store the gifts properly.

here's the card number one: 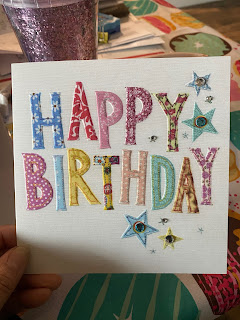 and i don't know why i'm so hesitant to open any of the gifts yet.  maybe i just want to make it last as long as i can?  kinda weird.  and actually...i get to open the next card now too, don't i?

so much fun!  it's such a MIL thing to do - if you're a longtime reader, you'll remember that she mailed me 40 different birthday cards in the month before my 40th birthday.  holy crap...that was almost ten years ago (yes, i can math).

HOW DID I GET SO OLD! dang.

Email ThisBlogThis!Share to TwitterShare to FacebookShare to Pinterest
Labels: birthday extravaganza, coming up on 50