while finding the bride's gowns ended up being a much easier process than we'd anticipated, i can't say the same for her mother.  or her sister.  the bean is...not a dress-y kinda girl, at all.  she actually wanted to wear a suit, which would have been super cute.  although since a hawaiian wedding was in the works, we gently reminded her that the heat and humidity might make it super uncomfortable.  we searched for a jumpsuit that would work, but either we couldn't find the right color or it was too low-cut.

and so we somehow managed to talk her into sucking it up for a few hours in a dress.  we asked her if she could just wear one for the ceremony and pictures, and then she could do a costume change of her own for the reception.  she still grumbled a little, but once she said yes we found a dress she was comfortable in fairly quickly.  and of all places, it ended up being amazon to the rescue.  i have a picture of her trying it on, but i know she'll kill me if i post it and so you'll just have to wait for photos from the wedding to see what she ended up with.

as for me - well, i really wanted something short and floaty.  i didn't want any of the traditional mother-of-the-bride getups because let's face it - i may be old, but i don't have to wear a matronly gown.  i looked at countless websites, searching through bridesmaid dress options and department store gown sections.  nothing was catching my eye, but i did find something that looked like it might work on the neiman marcus website.  after checking their return policy, i went ahead and ordered it and tried it on when it arrived. 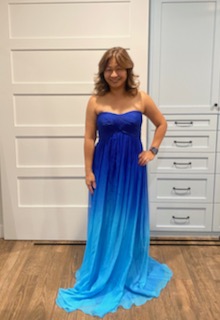 i mean...it was okay.  although the back was really bare, and i knew i wasn't going to be comfortable with all that skin showing.  i still think the dress is pretty, and if it had been a little more covered up back there i probably would have ended up wearing it.  alas, i didn't love it and so back to the store it went.

the bean and i were at the mall picking something up one day, and as i stood in line i sent her over to the dress section to see if she might find anything good.  when she came back she said "well, there was this one dress, it's orange and it has a seashell in the middle.  i dunno, you might like it."

that was quite the description, amirite?  i teased her and said "OMG, that sounds terrible!  is that the best description you can give me?" and she gave me that 14-year-old shoulder shrug and went back to perusing tiktok videos on her phone.  and once we were done at the pickup counter, i asked her to show me the dress she'd found.

and then i saw it. 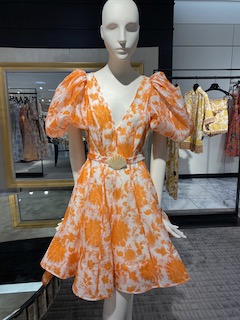 OMG, it was PERFECT.  it checked all the boxes for what i was looking for, and i fell in love instantly.  but we were meeting friends for dinner and we were already running behind, so i didn't have time to try it on.  i thought maybe i could just buy it and take it home to try on, but a quick peek at the price tag told me that it was pretty far out of my budget.  bummer.

and so i kept looking.  i ordered this one from nordstrom, and it was...okay.  but still...it wasn't love.

as the weeks went by and i still hadn't found anything i liked, the old lady was starting to give me shit about it.  overhearing one of our conversations, the hub finally told me to clear an afternoon so that he could take me to buy the dress i'd loved so much.  and so we headed down to south coast plaza for some shopping and an impromptu date night.
our first stop was nordstrom, where i was unsuccessful in finding *the* dress but tried on a couple of other ensembles by the same designer.  cute, but still not quite right. 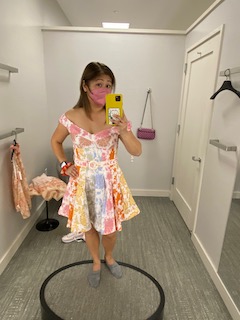 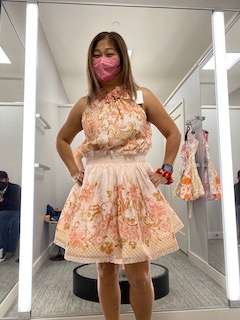 "it's okay," the hub said.  "there's a hundred other stores here to look through."  he's such a trooper.
and then we saw it - a whole store filled with zimmermann-made shoes and clothing.  and i found the dress immediately - in my size, even.
um...and another one that the hub and i both loved. 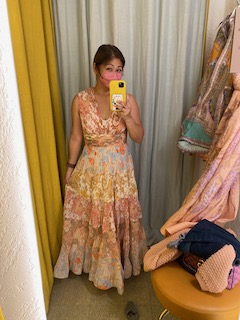