almost as soon as my birthday was over, it was the bean's turn.  and this is the only year like ever that we were able to use the same number balloons, and i was pretty proud of myself when i realized it.  and yes, i do realize how nerdy that sounds. 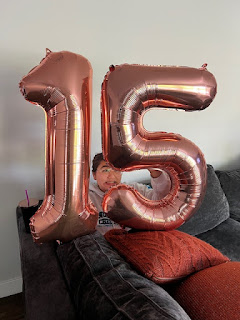 they kicked off their day with - what else? - the just-released BTS concert movie streaming on disney+. 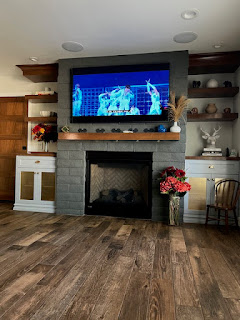 the hub had instructed me to take the bean and MIL out for a nice brunch and some shopping, keeping us out of the house for a few hours while he prepped for some birthday shenanigans.  he'd chatted with the bean during car rides to and from school over the previous month or so to get some ideas as to what we could do for their birthday, and used the information he'd gathered to plan out the day.

we headed out to pasadena and grabbed a table at great maple, where the bean indulged in a plate of chicken and waffles. 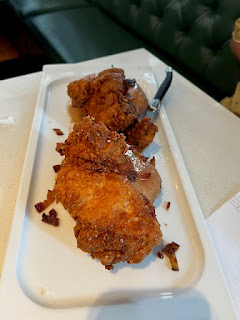 and then when we got home, we walked in to find fresh new birthday balloons and presents.  i'm looking over my camera roll from the day and it seems that i took more videos than still photos that day, oops.  anyway, as a result of the conversations he'd had with the bean, the hub had booked a personal chef to come to the house and teach us how to make fresh pasta.  we'd invited the bean's BFF to join us, so they were surprised when i answered the door and she walked in with her mom. 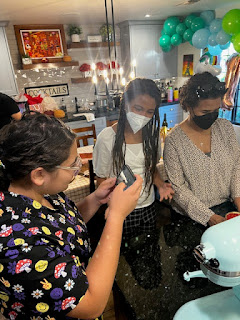 because of crazy weekend traffic coming from the west side, our chef arrived a few minutes later and brought in a shitton of grocery bags full of all kinds of good stuff. 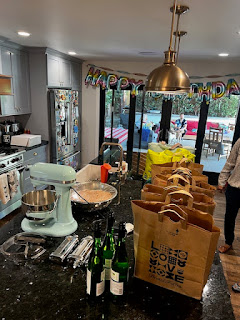 he got right to work unpacking those bags and setting up a lovely charcuterie spread for us, which we were all more than happy to dig into. 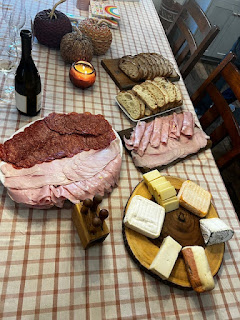 he'd also brought in this giant bowl of seasoned ground beef and pork, which he instructed the bean and BFF to roll into golf ball-sized meatballs. 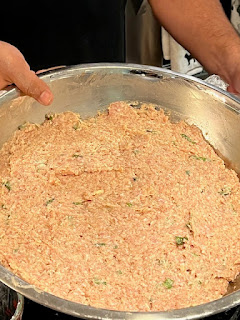 while we were all munching on the meat and cheese spread, chef had put together the fresh tomato sauce and had it simmering on the stove.  and instead of baking the meatballs (which is what i would normally do), he dropped them into the sauce to slowly braise and soak in all that lovely flavor. 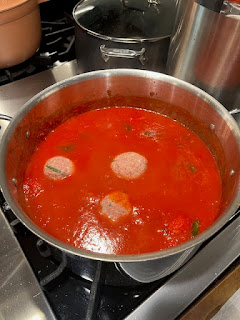 he also showed us how to make the pasta dough - a simple mixture of flour, water, eggs and egg yolks.  it was mixed in my very own kitchenmaid using the dough hook, and then he turned it out onto the lightly floured countertop and kneaded by hand until he was satisfied with it.  then it sat tightly wrapped in plastic wrap to rest for about an hour until it was ready to be rolled out.  he portioned it out to make it easier to work with (which also made sure that everyone would get a turn), and then he took the first chunk of dough and showed us how it's done.

first, he kneaded it a little more and then flattened it out into a neat rectangle and sent it through the pasta roller.  once it came out, he folded it in half and put it through again, repeating the process about four or five times until it was finally ready to be cut into fettuccine.  a quick toss in flour to keep it from sticking and we had the first portion: 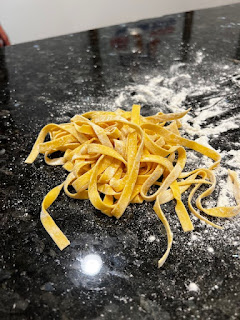 the bean and BFF each took a turn: 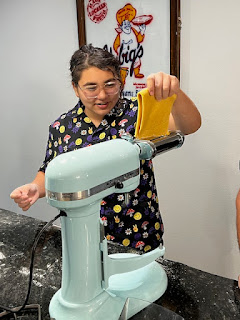 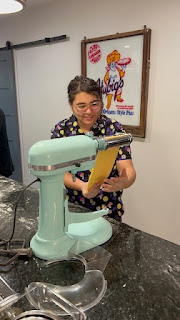 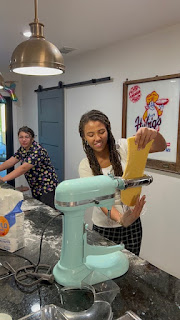 the dogs were in and out of the kitchen the whole time, and BFF's mom threw stevie a bone and let him sit on her lap while we all watched everyone make pasta. 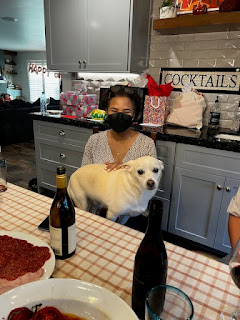 the meatballs were done, and they looked and smelled amazing. 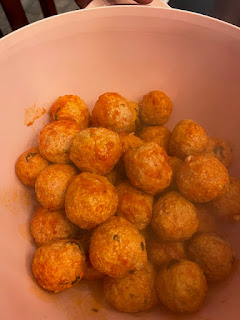 here's all ten portions of pasta, freshly rolled and cut by the bean, BFF, the old lady, and BFF's mom. 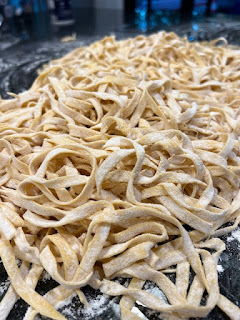 to cook the pasta, it only took about 30 seconds in the pot of boiling salted water.  chef pulled it out of the water and dropped it right into a warmed sauté pan, ladling some tomato sauce on top and then plating it with more sauce plus those meatballs and some freshly grated parmesan. 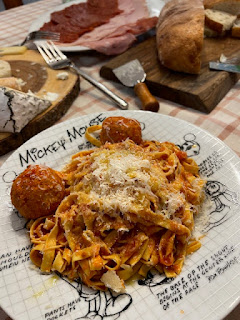 it may have been her sister's big day, but the old lady is probably the biggest pasta lover i know.  she was a very happy camper. 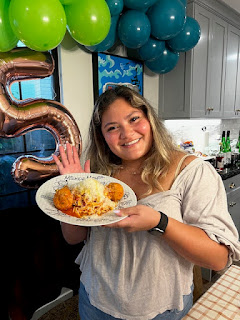 although we were all stuffed from all that amazing pasta, chef got right to work on the next course: chicken piccata.  so yum. 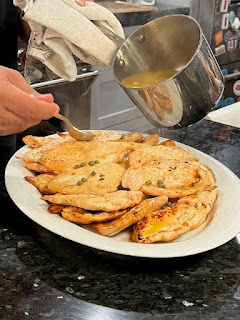 a little later, we gathered again in the kitchen to light candles on the cake - a gorgeous chocolate cake filled with mousse and topped with a luscious ganache. 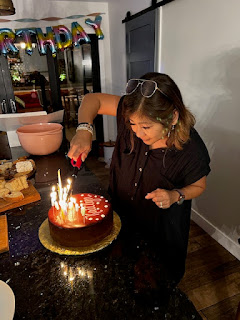 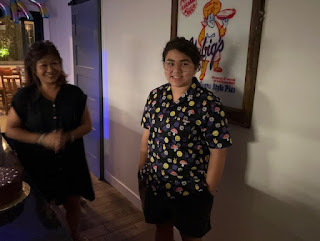 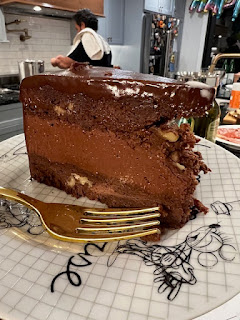 along with tickets to a "stranger things" experience from BFF, the bean happily opened gift bags that contained several new button-up shirts and two highly coveted pairs of crocs.  one was adorned in BT21-themed jibbitz - which had sold out quickly, but not before i'd managed to snag a pair.  it had been hard for me to stifle my laughter when they showed me the "sold out" notice online a few days prior, and that's why they cracked up like this: 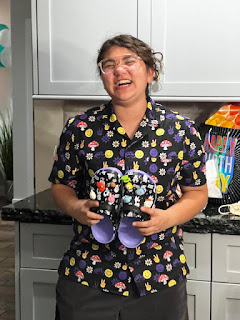 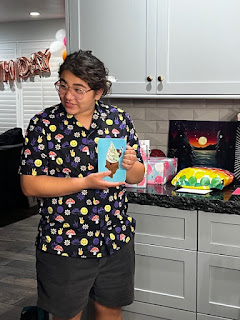 when we were at the airport in cabo on our way home this summer, the bean had pointed at a pair of crocs on some kid's feet that were lightning mcqueen-themed.  i'd immediately searched online to see if i could score a pair only to find that they'd been discontinued a couple of years ago and the only pair i saw was going for $400 on ebay.  eek.
and then a month or so afterwards, probably thanks to big brother watching and listening to what i search for on my phone, i got an email that said they were going to do a limited release of those crocs with purchases available via a lottery.  and so i entered my information, hit "enter" and hoped for the best.
you know what came next.
and that's how i got this picture: 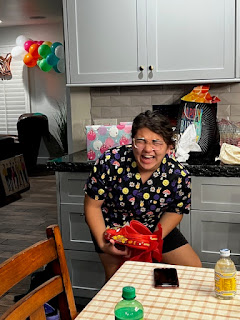 balloons, delicious italian food, scrumptious cake, fun presents and loved ones.  i'd say it was a pretty fantastic way to spend one's 15th birthday.
at November 07, 2022

Email ThisBlogThis!Share to TwitterShare to FacebookShare to Pinterest
Labels: bean's birthday, food is better with friends