like a lot of others, i was a big fan of the show "quantum leap" back in the day.  it was always entertaining with a great storyline and a ton of special guest stars over the course of five seasons - like jennifer aniston, bob saget, melora hardin, teri hatcher.  i remember hating the series finale, but i guess one bad episode out of 97 isn't too bad.  and in all honesty, i'd totally forgotten about the show until i came across a marathon on the syfy network - which was happening because of a reboot that i didn't know was coming.

and then as i was going through the google, reading articles from several sources to get myself caught up on the new show, i found something that caught my eye.  to celebrate the kickoff of the first season of the revamped "quantum leap," there was going to be a pop-up somewhere out in hollywood that would offer the chance to fill up your gas tank based on gas prices from 1985.  they promised a fun drive-thru experience complete with trivia, breakdancers, swag and snacks.

my friend said "you're driving to hollywood for cheap gas?  you drive a tesla!"

while that's true, the old lady's always looking for a great deal.  and she's usually up for a fun adventure like this as long as her work schedule allows.  and as luck would have it - well, you can see where this is going.

after we dropped the bean off at school, we hopped right onto the freeway and made the trek out to hollywood to find the check-in lot and hopefully score some fuel for a mere $0.91 per gallon.  we followed the directions and joined the line of cars that wrapped around the block, with a sweet view of the famous capitol records building. 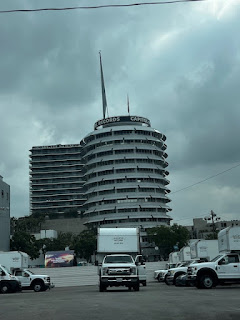 with news of the promo being spread on the radio that morning, we were prepared to wait (and potentially not even snag any gas).  but we were pleasantly surprised to find that line moved fairly quickly thanks to the staffers running the show. they were friendly, organized, and had their shit together.  pretty soon we were right in front of the entrance: 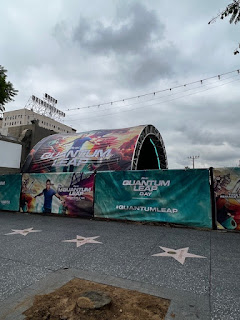 and then we pulled into the lot and went through the quantum leap "accelerator." 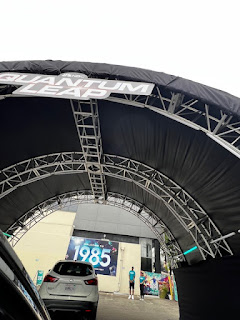 we drove past some signage with the rules for the event. 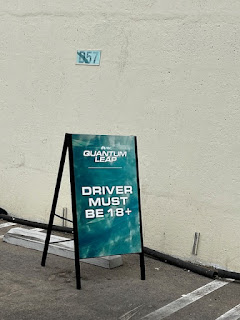 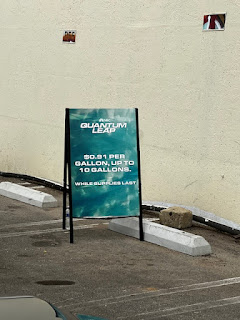 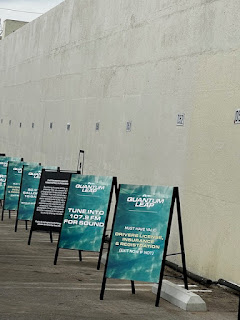 and then we were directed to join one of the lines of cars waiting to receive further instructions. 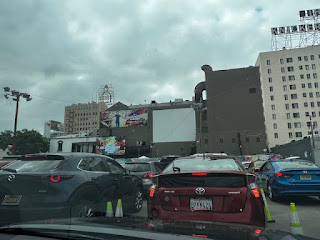 we were greeted by a couple of the staffers, who handed us this voucher to hang on the rearview mirror: 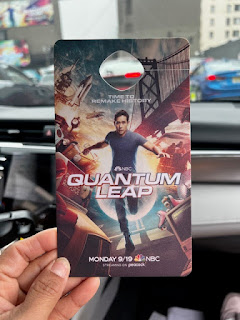 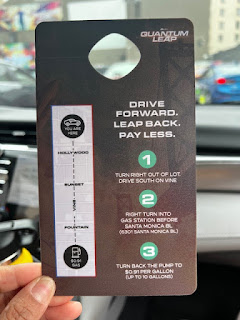 along with some branded bottles of water and mystery pop tarts. 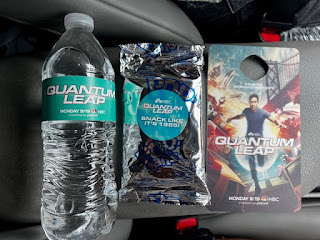 unfortunately, we were stuck in the back of the lot with our view of the stage where the dancers were performing completely blocked by the other cars in line. 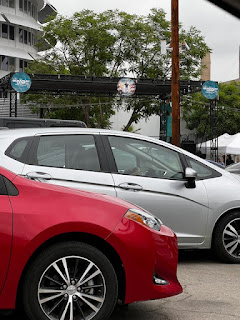 it didn't matter, though.  we'd scored one of the vouchers, so we were definitely going to get to fill up for less than $10 (there was a limit of ten gallons per car).  and we were entertained by the music on the radio station we were directed to tune into, along with the trivia questions and trailers for the upcoming series premiere that flashed on the giant screen in front of us. 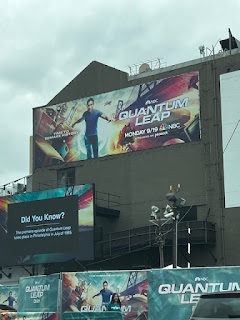 we were basically in a holding area, just killing time to allow the cars ahead of us to get to the actual gas station that was about a mile away.  since it was a weekday morning, they were doing their best to avoid adding to the typical hollywood area traffic by only letting a handful of cars out at a time.  it took a little while, but it wasn't too bad.  and then finally we started to move. 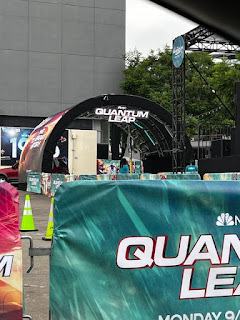 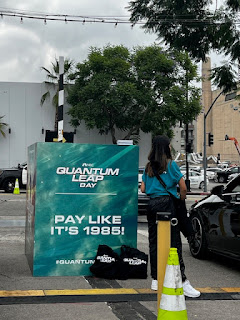 on our way out we were greeted by one last smiling staffer, who handed us these: 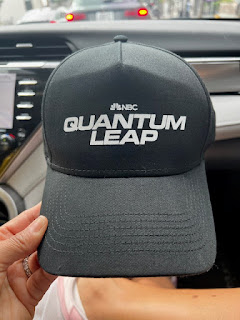 and then we headed down the street to find the gas station. 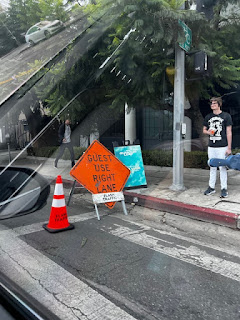 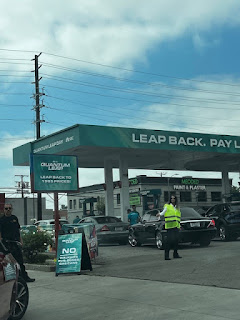 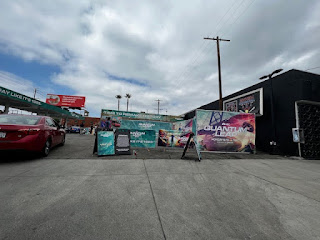 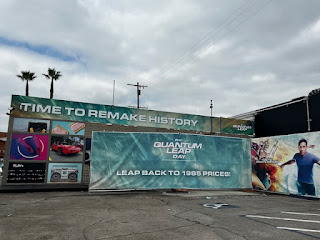 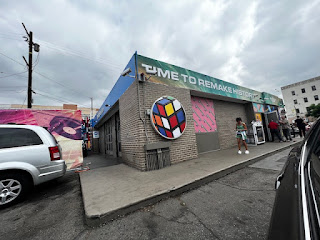 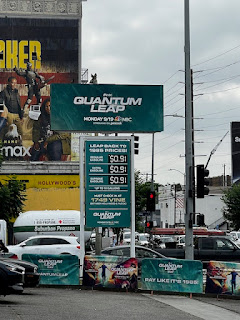 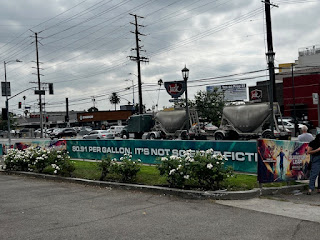 pretty sweet, right?  and as we were sitting there waiting our turn, we were approached by a photographer from the l.a. times who asked us for our names and permission to publish pictures he'd taken that had us in them.  heh.
when we pulled up to an open pump we found that we didn't even have to pump the gas ourselves.  i handed the staffer my credit card and she took care of everything - like good old-fashioned full service from the olden days. 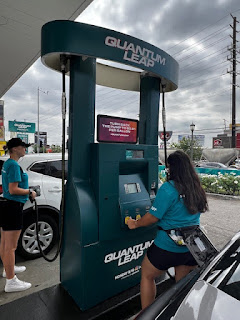 look at that!  woohoo! 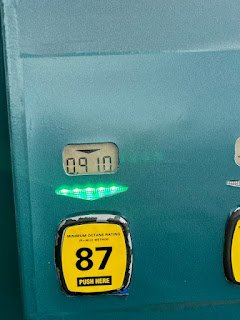 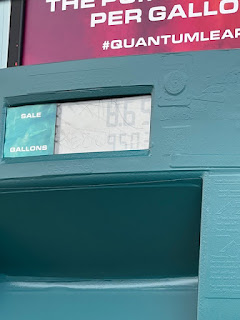 later that evening, my mom emailed me a screenshot my uncle had sent her.  apparently, he'd been perusing his digital edition of the l.a. times and came across a familiar face.  and when i googled, i found this: 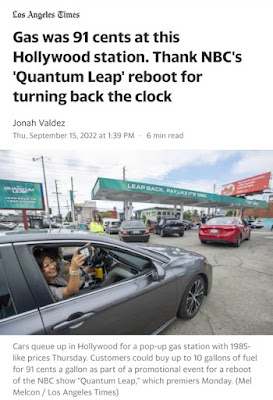 i just finished rewatching the entire original series, which is currently streaming on peacock.  it was just as good as i remembered, and the bean even sat down and watched a couple of episodes with me.  i'd explained to them what the premise of the show was, and realized that because of the time traveling aspect   you couldn't really tell that it was a 30-year-old show.  there were a few storylines and some bits of dialogue plus their cartoony vision of what 1999 would look like, but otherwise the episodes were easy for all ages to watch.
and i've also now seen the first few episodes of the new version.  i like it, and it's just as much fun to watch especially since they've woven bits and pieces of the OG series into the storyline.  unfortunately dean stockwell passed away last year, but while scott bakula has said that he doesn't have anything to do with this show i'm hopeful that he'll somehow make an appearance at some point.  it would be fairly easy to do considering how the old show ended (which i'm not spoiling despite how long ago it aired, just in case anyone out there's watching it for the first time).  i just hope that i don't end up really enjoying the show only to have it cancelled after the first season.  that happens so often, and it's really frustrating.
so watch the show!  it's entertaining and creative, and i'd like to see where they take it.  help a sister out here.
at November 02, 2022