getting a little clarity

after cheer season came to an abrupt end in march - while we were in disney world for competition, no less - things with one dream have been rather up in the air.

until the last couple of weeks, when the coaches were finally able to offer conditioning sessions and practices to whoever was interested in returning.  it was a couple of weeks' worth of sessions and then it was time for the athletes to go in for skills evaluation so that they could be properly placed into teams.  the goal is to get the teams ready with choreography and stunts and things in the hopes of going to some sort of competition come spring 2021.

i wasn't at all sure that the bean would be willing to go.  in fact, she really wasn't - but i reminded her that she was expected to pick up some sort of physical activity, and with no interest in any other sports and really not much else available...well, here we are.  i really think that deep down, she really does enjoy it despite the grumbling i get when it's time to go to practice.  but when those uniforms are on and we're at a competition, that kid turns it on and she lights up that stage and gives it all she's got.  i adore watching her perform, and she knows it.

instead of just posting the team rosters or reading them off to the girls at practice, the coaches got creative and made the reveal extra fun.  each girl was given a balloon: 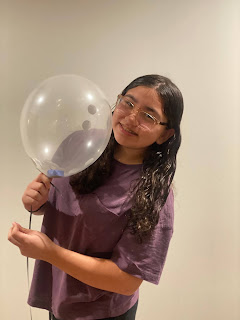 and then she got to pop it, getting showered with sparkly jumbo confetti and finding a little piece of rolled-up blue paper with her team name on it. 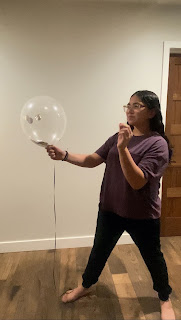 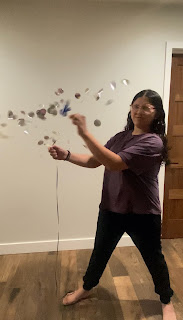 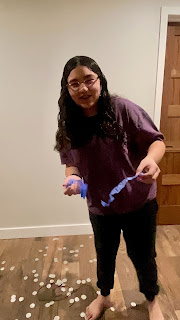 she'd been a little worried about being placed on a lower-level team because she hadn't been practicing or keeping her skills up during quarantine, but as it turns out...she's actually leveled up.  now technically, this is the team she performed with in florida.  but it's comprised of older girls, at a slightly higher skill level than the one she was officially part of last year. 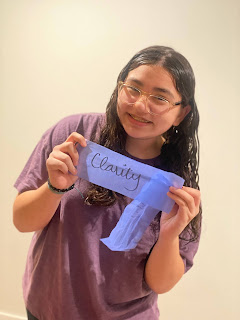 she tried to downplay it a bit, but i know she was at once relieved, excited and nervous.  practices begin next week, with choreography all day next saturday.
while i didn't miss the chauffeuring duties that pretty much consumed my life pre-covid, i think we're both pretty happy to return to even a little bit of normal life.  who knows...maybe one day we'll find ourselves back at disney world.  it's a long shot, but it's fun to think about.
at November 13, 2020