did i ever mention that while we were on lockdown i managed to convince the hub to buy a rowing machine?  one of my friends posted one that was from the same manufacturer as the ones we use at orangetheory, only hers was really pretty.  made of natural wood and black metal hardware, i knew it was nice enough that he would go for it.

whether he would actually use it was a whole other thing, but that's a topic for a different day.  heh.

so it took a couple of months for it to actually be shipped to us - you know, covid and all - and then even when we received it, it had to sit in boxes for weeks until we were finally able to bring it into its new home in the old lady's old bedroom.

and then i'm kind of embarrassed to admit that it sat there for more weeks before we actually put water into the tank and started using it.  yeeeeeeaaaaah.

confession:  i hate rowing when we're at orangetheory classes.  hate. it.  i'm terrible at it, and i'm exhausted after a minute of it.  like, seriously...sixty seconds and i'm spent.  but it really is a terrific full body workout, as you use your legs-core-arms and then arms-core-legs for each row.  and i'm pretty sure that the bit of body transformation i noticed after the first 6 months-year of classes was thanks to the time spent on that machine.

so for my first real row, i decided to just go for a full five minutes of straight rowing.  i tried to keep it consistent and pace myself so i wouldn't die.  it didn't work.  but it definitely got my heart pumping and i was pretty proud of myself for doing it. 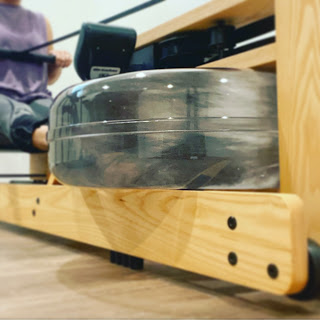 i kept it up for that whole week, hopping onto that rower for at least five minutes a day and then using the squat machine that we'd also bought during lockdown that had been gathering dust for the last few months.  i rounded it out with some simple weight exercises and planks, and on some days the old lady would join me and we'd alternate throughout the room like circuit training.  i even got the bean to hop on a couple of times: 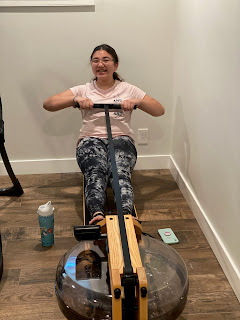 and then last week i thought of something - maybe if i did 30 second intervals like i used to do when i was running, i could go longer.  and on my first try, i went for 15 minutes of 30 seconds row/30 seconds rest. 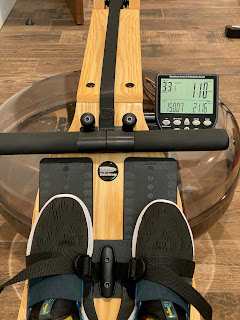 this seemed like a pretty good option for me, and i kept it up for a couple more days.  i took a day off, and then i decided to try something else - instead of resting for 30 seconds, i'd just lightly row.  kind of like an active recovery.  and whaddaya know...i managed to increase my output by A LOT. 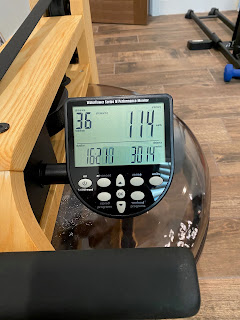 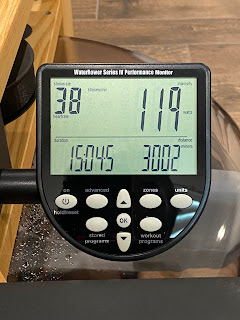 i've also started doing my virtual barre classes in the gym, which is working out really well because i can close the door and the dogs can't come in to lay on my mat at the precise moment that i need to use it.  using my laptop isn't the greatest, but it'll do for now.  and i've already hit up the hub to add a tv in there so i can mirror my screen to it.  plus i'm putting a wall-mounted barre on my christmas list.  in the meantime, i'm super excited to be able to take classes from my favorite instructors again, from the comfort of my own space. 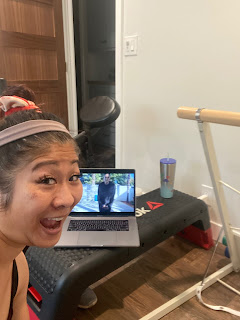 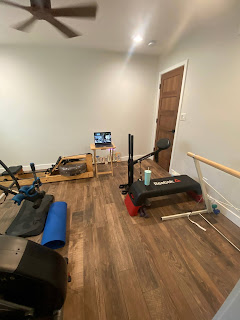 after class, i decided to see if i could swing a quick row - shooting for 1,000 meters in 5 minutes.  success! 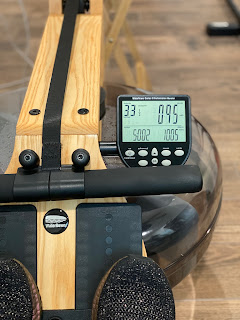 Email ThisBlogThis!Share to TwitterShare to FacebookShare to Pinterest
Labels: working out