the 'rona is real

okay - so with the experience completely behind us now, i'm compelled to put out a possibly-tired-but-still-extremely-important PSA:

KEEP WEARING A MASK AND CONTINUE TO SOCIAL DISTANCE.

and why do i feel it necessary to reiterate what has become the mantra of 2020?  well, it's simple:  we finally got to end our quarantine after the hub tested positive for the dreaded 'rona.

yup.  the covid hit the house of wan.  i'm happy to say that it didn't hit us hard, but still...we now have personal experience with the plague of 2020.

just after halloween, the hub started feeling a little off.  he found himself extra tired one evening, going to bed at the ungodly hour of 8:30.  and that night he couldn't get comfortable - he'd get super hot, start to sweat, throw the covers off and then he'd be freezing.  rinse and repeat, all night long.  since what he was feeling was just like the symptoms of his twice-yearly man colds, we chalked it up to that and he pretty much just stayed in bed for that day.

except that unlike that usual man cold, he didn't feel better after a day of rest.  instead, he added a headache and full body aches to the roster of symptoms. and at the end of the second day, he found out that he'd been exposed to someone who'd tested positive for covid.  wonderful.

i booked him a mouth swab test at dodger stadium for the very next day, and within 24 hours he had his very own positive test result.  yaaaaaaaaaay.

and then i scrambled to alert everyone that the bean and i had spent any time with at all over the last few days while booking our own tests.  the old lady and her special friend booked tests as well, and on saturday morning the four of us headed out to dodger stadium - in separate cars, of course. 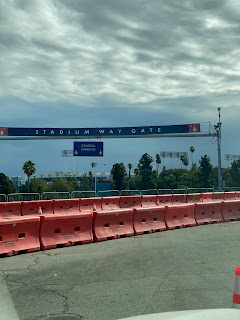 the lines were incredibly long, but i have to give them credit - the process was really streamlined and organized, and super safe.  windows stayed rolled up almost the entire time, with clear signage and cones to keep the lines separated. 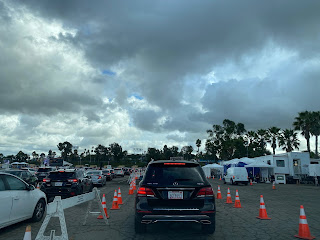 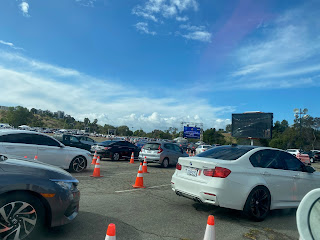 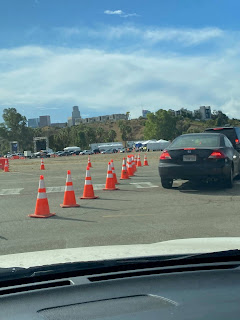 i had to laugh at this cute little dog, who stared at us disdainfully as we sat in line. 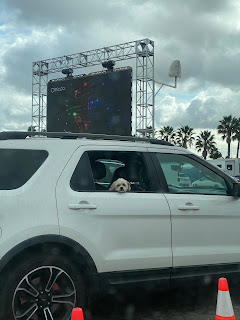 when we finally got to the booth, i held up my phone with our confirmation numbers on the screen and was handed our test kits using one of those longarm claw things.  quite a difference from the last time we got stuff in this manner a few weeks prior. 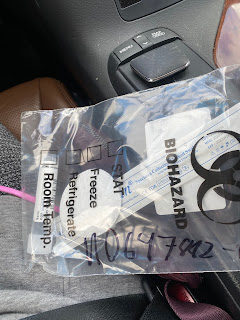 inside was a wrapped swab, a cotton pad, a vial containing about an inch of some sort of liquid and this instruction pamphlet. 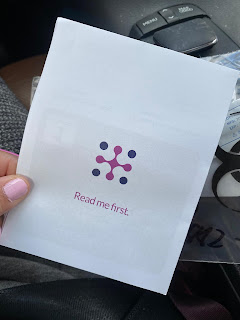 we pulled up to another stop sign, where the staffer asked us through the closed window if we'd done it before or had watched the instructional videos.  we hadn't, of course, because the hub had already told us exactly what to expect.  so he walked us through the whole process step by step, which was helpful.  and in no time, we were headed on outta there. 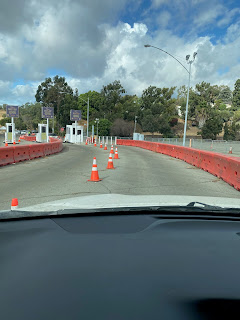 because i'm a bonehead, we'd discovered that the only thermometer we had in the house was broken.  and while i was texting with a good friend who's been working on covid-related research at city of hope, she found out that we didn't have one and promptly came over to drop one off on our doorstep. 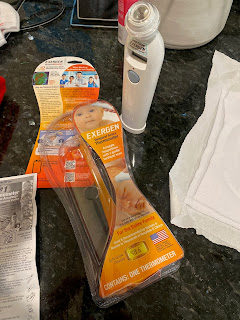 by this time, the hub's symptoms had mostly disappeared.  he was still a little tired, but he was fever-free and feeling a lot better.  he was already at the bored stage, having spent too many hours bundled up in front of the tv.  and for a guy who's used to being on the go, constantly getting things done, it was like torture having to just sit around and do nothing.  luckily, he could still conduct business from his phone and laptop.  and i was so grateful to see that he hadn't gotten hit hard by this thing - after all, nobody knows how their body will react.  we've all seen and heard all kinds of stories from both ends of the spectrum.  and it was just such a relief to see that he was one of the lucky ones.  i continued to keep an eye on him and probably annoyed him with how many times i asked him how he was feeling, but i couldn't help but be worried.

our test results came in less than 24 hours, and all four of us were relieved to find that we were all negative for the corona.  of course, this meant that while the old lady and her special friend were clear and could go about their lives as normal, the bean and i still needed to act as though we were in the same boat as the hub since we'd been exposed to him from the beginning.  to be completely honest, aside from not being able to see the old lady, her special friend and stevie, it wasn't terrible.  we had plenty of food in the house and really didn't need to go anywhere.  it was a sucky time for my sewing machine to be out for annual maintenance, but it's not like i don't have a ton of other crafty things to do.

although quarantine this time was different because we knew we were staying home for a real reason and not just as a preventative measure.  distance learning turned out be a blessing for us, since the bean didn't have to miss a single day of school.  and i discovered the beauty that is target delivery: 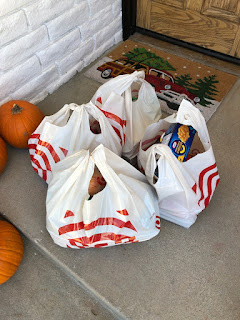 i'm not gonna lie, that's something i might keep.  pick out all my stuff from the app, have someone go through the store to grab it and check out, and drop everything on my doorstep PLUS still be able to use my red card?  yes.  thank you.

and while we'd tested negative, i still watched out for any sign of symptoms for the bean and me.  after all, the negative result didn't guarantee that we couldn't still get the virus.  but as the days went on and we still felt perfectly fine, i began to let myself believe that we were going to be just fine.  i also remembered reading somewhere that studies had shown that people with blood type O seemed to be more resistant to this virus.  i don't remember if i'm O-positive or O-negative or just plain O, but i do know that my blood type is definitely O of some sort.

towards the end of the second week, the hub's doctor had him go to the local clinic to have his oxygen levels checked.  he had to go three days in a row, and on the third day the doctor said that he was no longer contagious.  the nurses all told him that his vitals were great, and all of his symptoms had disappeared as well.  that was a good day.

twelve days after the the hub's symptoms began, we all headed back to dodger stadium to test again.  this was mainly for the bean and me, but the hub tested with us just to check.  i hadn't realized that the virus could still linger in the body for up to 3 months after being diagnosed, which meant that there was a chance that he'd still test positive even though he wasn't contagious anymore.  and since it was a weekday morning, the lines were much less intense. 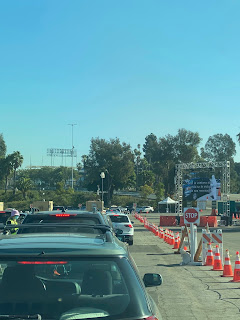 as we waited to check in, we caught a glimpse of a giant dodger bobblehead statue being moved off in the distance. 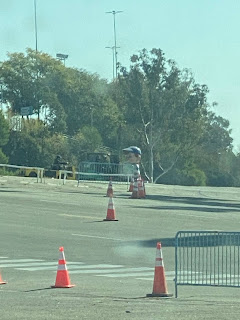 being in the passenger seat this time, i got to capture the signage that explained the process for the self-administered mouth swab. 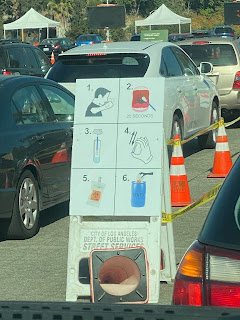 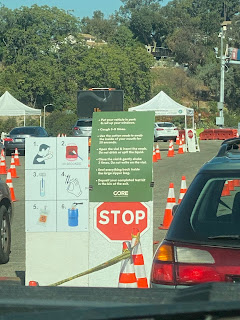 this time, we didn't wait for further instructions and were ready to drop our kits into the dropbox well before we pulled up to it. 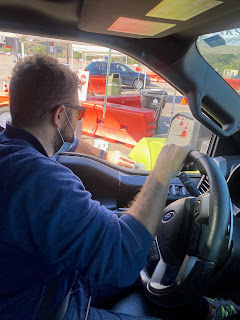 but unlike the first time, our results didn't come back right away.  instead, we ended up waiting almost the full 48 hours before the text finally came through.  it was a long wait, and while the hub had the green light to slowly move back into normal life the bean and i had to wait until we knew for sure that we were good to go.

and yes, we indeed got those negative results first thing on sunday morning.  the hub's was still positive, as we'd been warned, but it was such a relief to finally know we were all clear.  we'd been really lucky, and  it'll be easy to pick what we're most grateful on thanksgiving this year.

WEAR YOUR MASKS.  NOBODY IS TAKING YOUR FREEDOM AWAY.  IT'S A PIECE OF FABRIC.  JUST DO IT.