a couple of weeks ago, i received a text from one of my mom friends that was actually meant for someone else.  nothing weird or anything like that, though.  she was sending her some information on a 10-day body reset using arbonne products, which she'd recently started repping.  she's not a pushy saleslady type, and she was quick to apologize for the mistake.  it had caught my attention though, and so i asked her for more information on it.

it's funny - my mom and i had been involved with arbonne back in the day, like in the early 90s.  back then it was all about skin care and clean, cruelty-free makeup.  so i was pretty amused to find myself purchasing their products again a couple of decades later.

knowing what you know about me, you'll probably think this is crazy.  because i was committing to changing my diet to include shakes to replace breakfast and lunch, with dinner consisting of a plate half filled with green veggies, with the other half split between lean protein (chicken, grass-fed beef or seafood) and some sort of healthy carb, like quinoa or brown rice.  but here's the kicker...i had to cut the following completely out:

i knew it was going to be rough going, but i was feeling really motivated to make a change that my body was apparently asking for.  not to mention - well, wan-niversary 15.0 is coming up in a couple of weeks.  and if you recall, last year i was barely able to fit into the dress again for the annual twirl.  i resigned myself to the notion that it was my final twirl, but this kind of lit a fire under my ass and i thought, maybe i can still make it one more year!  at the very least, i wanted to give it a try.
i received the box of products a few days before the reset was to begin.  inside was a bag of chocolate flavored protein powder, a box containing 30 days' worth of a digestion aid drink and a third box of a strawberry flavored fizzy drink powder.  i was nervous, but excited to see how this would all pan out.
on day one, i took out the first serving of digestion plus and mixed it into 4 ounces of water, per the instructions.

this stuff...oh, it was foul.  it was earthy and smelled weird and left the worst aftertaste even after every drop was gone.  but it was part of the program and i just told myself - one down, nine to go.
the next step was to mix up my first breakfast shake.  two cups of almond milk, a handful of fresh spinach, a spoonful of almond butter, a cup of frozen strawberries and two scoops of chocolate protein powder. 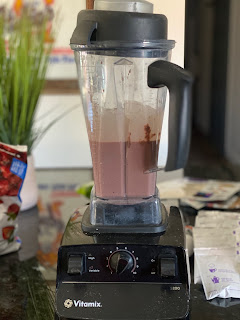 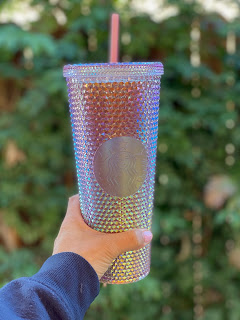 i decided to pick one of my prettiest starbucks tumblers from my vast collection, and poured it in.  this ended up being a thing - every day, i picked a different cup to drink my two daily shakes out of.  while the shakes were actually pretty tasty, using fun cups made it a little extra. 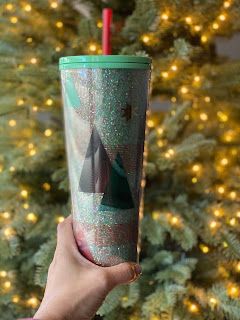 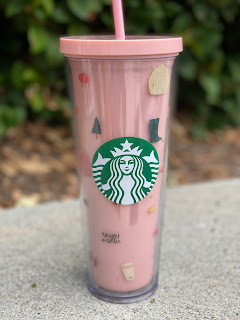 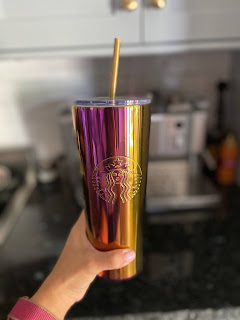 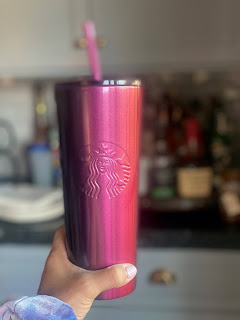 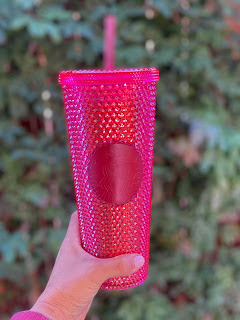 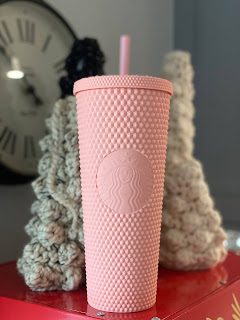 and i decided to try different kinds of milk, too.  having had oat milk a couple of times before, i thought it might be a good option for these shakes. 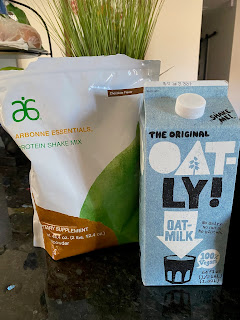 the old lady was doing a modified version of the reset along with me, and during a trip to the local sprouts market we came across macadamia nut milk.  it was a little pricey, but it sounded interesting and we figured it would be a good addition to our roster of non-dairy milk options.  except that when we tried it, we agreed that it was a little funky.  it wasn't terrible, but it added an odd flavor to the shakes and we ultimately decided to stick to the oat and almond milks.
as for dinners, i ended up sticking to some pretty basic meals.  one night, it was a pan-seared steak with asparagus and steamed brown rice with tomato.  another night, a simply seasoned chicken breast with arugula tossed in a little olive oil and sea salt and more brown rice.  and a couple of nights i cooked a salmon fillet in some ghee and lemon pepper.  i was usually starving by dinner time, and didn't even take pictures of most of my dinners. 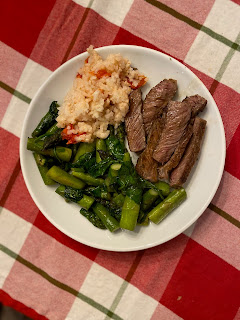 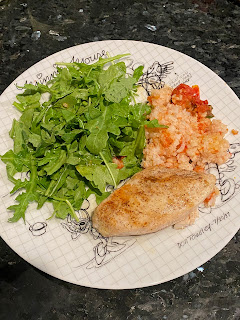 when i mentioned to my friend that i was struggling a little without having a little something sweet in the evenings, she sent over a couple of recipes.  the first took a little more prep - something called "cake cups," even though it didn't involve any sort of cake at all.  instead, these were like reese's cups using some of the chocolate protein powder, coconut oil, almond butter and some cacao nibs.  i portioned out the concoction into mini cupcake cups and stuck them into the freezer as directed. 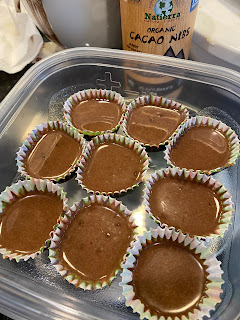 the cups solidified pretty quickly, and i took one out that night when the sugar craving hit. 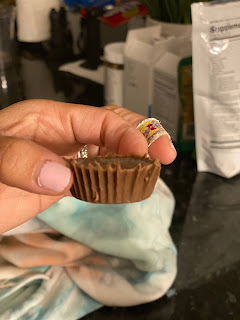 these little things, as odd as the recipe sounded, turned out to be a lifesaver.  i was allowed to have two per serving, and the texture and flavor and the little crunchy cacao nibs were pretty fantastic.  although it was also around this time that i noticed something a little odd - while i had cut out sugar from my diet, a glance at the ingredients list for the protein powder told me that there was a decent amount of cane sugar in the mix.  7 grams per serving, it turned out.  that explained why the shakes were so tasty.  heh.
another night, i tried her recipe for a mug brownie.  this included protein powder, some coconut sugar, baking powder, a little olive oil and some almond milk.  it was a pretty generous serving, and it actually ended up being so rich that i couldn't finish it.  and why do these things always have to look like a big ol' turd in a cup? 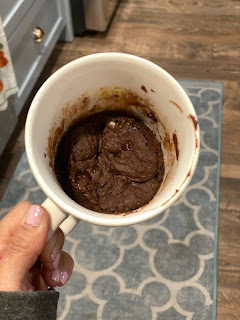 after about 3-4 days of this lifestyle change, i happened to step onto a scale just for fun.  i really didn't have a weight loss goal in mind, and in fact had made the rookie mistake of not stepping on the scale before starting the reset.  but i'd randomly weighed myself the week before, and i was pretty stoked to realize that i was actually down 3.5 pounds.  it was pretty encouraging, but at the same time i was noticing that i was struggling a little.  i was feeling a little lethargic, like all the time, which i initially chalked up to lack of caffeine.  i felt like i was starving, but i tried to explain that away by telling myself that it was because the change was making me focus on what i couldn't have.
and then i noticed something else - i had pretty much zero energy during the day.  and i was grumpy as hell.  i was annoyed at myself for all of it, and the rest of the family did their best to cheer me up and help me through it, and that just made me feel worse.  and when i did my barre class on sunday, i had to stop several times because i was feeling so weak i felt like i was going to pass out.
i stuck to it for eight days.  and then last night, i finally broke.  the hub asked me what i was thinking for dinner, and i'd picked up some chicken breasts while picking up all of the stuff we were going to need for thanksgiving.  but then i thought about how unappetizing a baked chicken breast sounded, and all i could think of was how good a bacon cheeseburger and fries sounded.  i mentioned it to the hub and he just looked at me and said "dude...you're miserable.  just get the damn burger.  why are you doing this to yourself?"
that burger and those fries were so damn good.  it was like a opening the floodgates after a drought.  and it didn't take much before i felt like i was super full.  definitely a lot less than what i used to be able to take down in one sitting.
although i'm still a little bummed that i didn't stick it out through the whole ten days, i think i'm going to at least try to keep my sugar and carb intake lower than normal.  i'll probably go back to a little bit of coffee, but i might also keep the dairy to a minimum.  and maybe brown rice isn't all that bad after all.  not to mention, more veggies on the daily is always a good thing, and maybe i'll find a different protein powder with less (or no) sugar in it and stick to drinking a shake for breakfast.  but this body needs more actual food to survive, and i'm not gonna deprive myself anymore.  i'm just going to try to make better choices...and besides, who wants to diet through the holidays anyway?
not me, that's for sure.  bring it on...in moderation, of course.
at November 24, 2020