yeah, so it's already been a couple of weeks since thanksgiving and i'm totally late with the recap.  although i'm guessing that our turkey day was a lot like most folks'...at home with immediate family.  this is actually not a whole lot different from what thanksgiving has looked like at our house over the last few years though, so it really wasn't an adjustment for us.  i kicked it off with a fun 30-minute express barre class online, and then capped it off with a quick session on the ol' rowing machine. 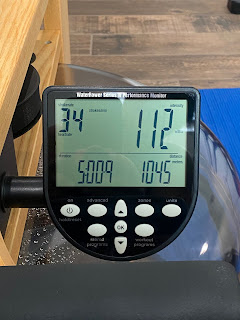 by the time i was done, the hub had already come back with my traditional starbucks drink that i was super happy to sip while i got to work on making the big meal.  and i was really excited to have my fabulously new, twice-as-big kitchen to do it all in. 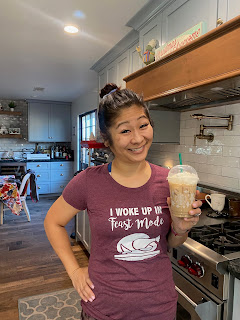 the old lady had requested that we try a recipe for cornbread stuffing this year, so the first thing to do was to make the cornbread.  after going to three different local grocery stores we found a shortage of cornmeal, so i ended up cheating and using a box mix to make my cornbread.  whatever.  that $.50 box of jiffy mix is foolproof, so everybody wins.  and while it baked, i had time to get the onions and celery sautéed. 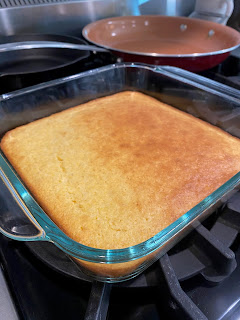 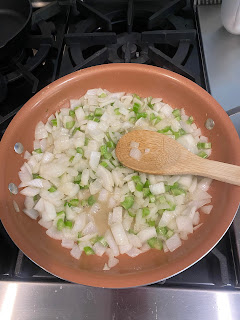 next was to peel, cube and cook the sweet potatoes.  and since i'd finally passed my smaller instant pot over to the old lady, i got to bust out the new mickey-themed one i'd bought to replace it.  the hub's eyes couldn't have rolled further back into his head. 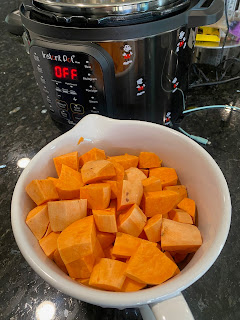 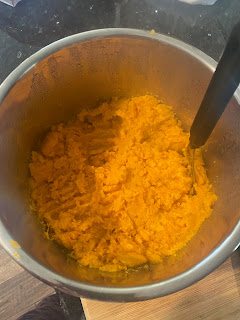 the old lady had pointed out that while i've done the turkey bacon-wrapped a few times in the past, she'd never gotten to try it.  she usually had to be at her dad's by the time dinner was served, so i decided that since she was staying put this was the year to revisit the bacon weave. 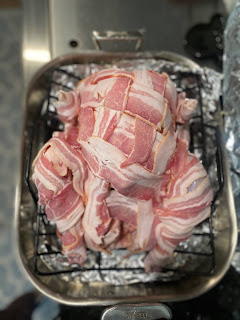 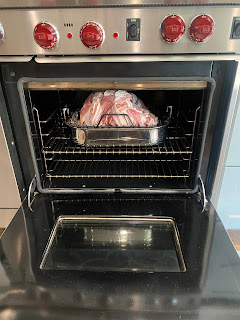 with the turkey in the oven, all the sides prepped and ready to bake and most of the dishes already cleaned up, it was time to relax a little.  while i took a nice hot shower, the old lady got to work on putting together a lovely charcuterie tray: 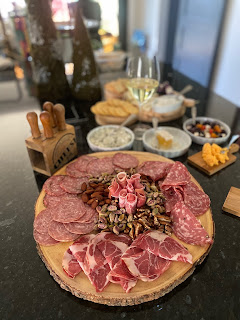 and she mixed up what we'd dubbed the cocktail of the day:  hot buttered rum.  the recipe she'd found involved creating a concoction with melted vanilla ice cream and spices, freezing it till it was set, and then pouring warm rum over a scoop of it in a mug.  we didn't have cool glass mugs to make it look pretty, but it didn't matter because we all chugged it down in no time because it was delicious. 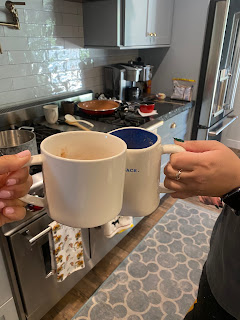 the turkey took a little longer to cook all the way through than we'd thought, but that was okay. 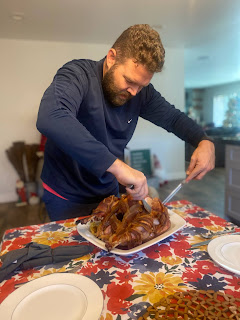 and it was hilarious to watch the dogs patiently waiting for him to sneak them a bite. 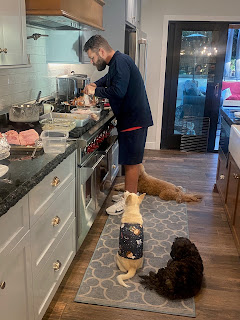 we'd taken a group photo at the table, but my vain ass isn't sharing it because i looked wrecked.  instead, you get this one - taken after we'd stuffed ourselves silly. 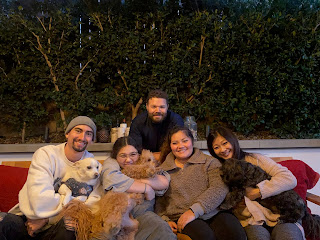 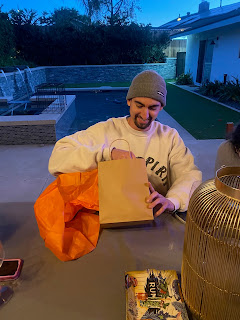 and then she and i surprised the group with what we dubbed our new tradition - advent calendars for everyone. 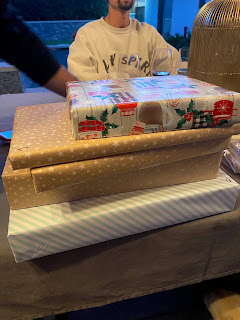 the bean got 24 days of squishies. 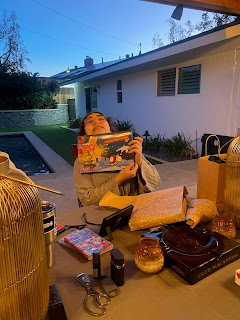 a fun lego set for the special friend: 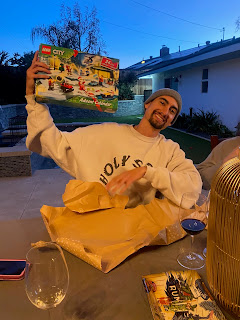 the perfect one for the old lady lived up to her name - 24 days of flavored tea. 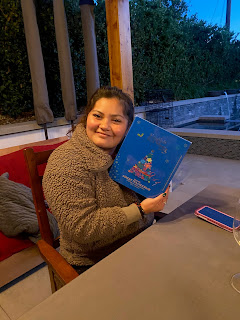 the hub's was the hardest to find...a jerky advent calendar.  i'm pretty sure he was secretly stoked for it. 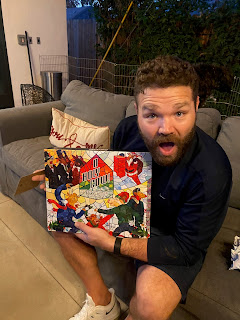 and of course...mine was friends-themed. 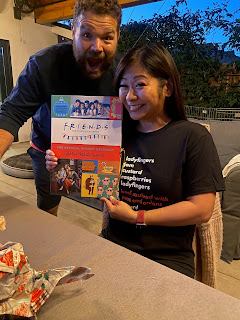 with one last wrapped package to open, i had to confess that i'd bought an advent calendar for myself.  this one was a 25-day cookie making advent calendar, with ingredients and tools to make five different recipes that were also included. 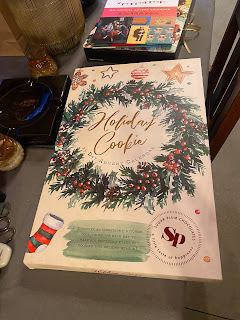 as always, it was a wonderfully relaxed thanksgiving spent with my most favorite people (and dogs) on the planet at home where we were cozy and comfortable, with lots of great food and drinks to share.  and despite the overall craziness of 2020...it was just perfect.

Email ThisBlogThis!Share to TwitterShare to FacebookShare to Pinterest
Labels: thanksgiving