it'd been awhile since we'd made our way out to disneyland, and the old lady and i were going through withdrawals.  we scored a reservation for a sunday, but the bean wasn't feeling it and opted out.

and so it turned into a rare mommy & me day for me and my firstborn.

even better?  after months of having to trudge the half-mile (each way!), the trams to take us from the parking structure to the main gates were finally up and running again.  woohoo! 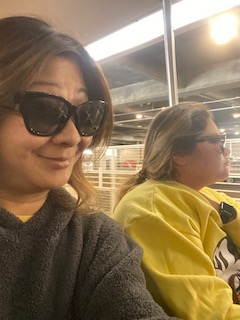 and in honor of women's history month, for the first time ever the floral display at the entrance to disneyland was arranged in the shape of minnie mouse. 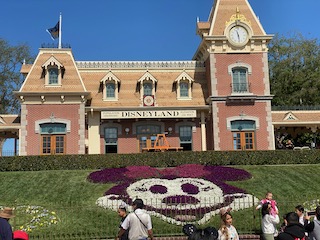 here's a pro tip - if you're looking for a super delicious coffee drink, skip the starbucks and place a mobile order at the docking bay back in galaxy's edge.  this is cold brew topped with sweet cream and a handful of cocoa puffs, and it's SO GOOD. 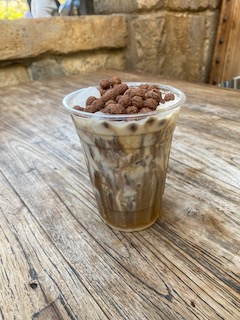 we also decided to split an order of beignets from the mint julep bar, and the seasonal flavor was cookie butter, with a cup of actual cookie butter to dip them in.  yum. my. 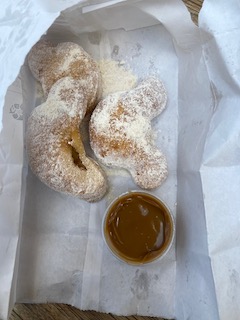 my little girl isn't a bride anymore, but an actual wife.  whoa... 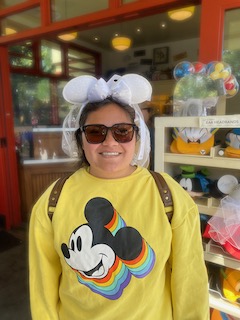 we still had tabs to use up from our sip & savor pass for the food & wine festival, so we headed over to the kiosks to make our selections.  from the d*lish booth, we grabbed the cubano slider and black & tan beef potato puffs.  both were super tasty. 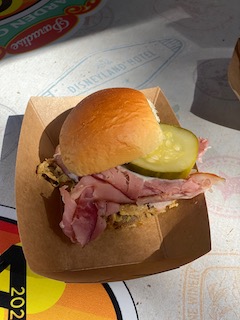 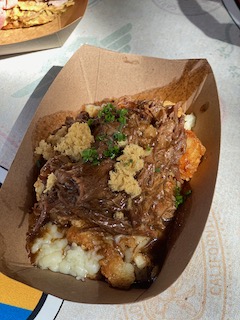 next up was something from the "nuts about cheese" kiosk.  this is the peanut butter & jelly mac with brown sugar streusel and strawberry pop rocks on top.  now, hear me out - while it sounds weird and probably kinda gross, i found myself going back for another bite.  and another, and another, until it was all gone.  the old lady, a major peanut butter fan, didn't love it.  but it was so odd that it was just...really fun to eat. 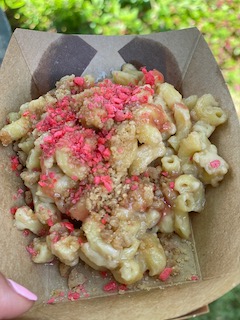 the next item came from the california craft beers booth - the IPA sausage dog with cheddar sauce, peppers and onions, jalapeño crunch topping on a pretzel roll.  i'm a total wimp when it comes to any level of spice, so this one was all for her. 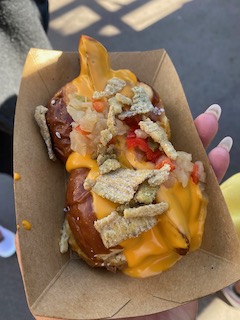 from "peppers cali-ente," this was the spicy yellow chile creamed chicken over jasmine rice with olive tapenade.  she got this one all to herself too. 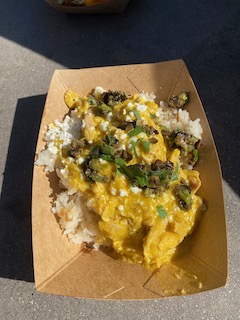 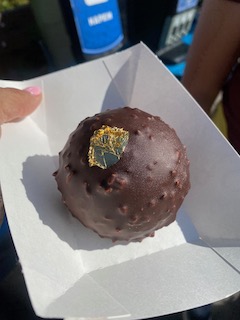 we decided to head over to avengers campus to see if we could score single rider seats on the webslingers ride, and on our way there we passed the newly-installed plaque that paid tribute to the father of all things marvel - stan lee. 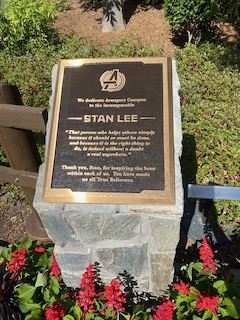 we were, indeed, in luck that day and not only did we find the single rider line open for the ride, but when it was our turn to board we were able to ride together instead of having to split up into two different ride vehicles.  it was a great way to cap off our day, and after picking up a couple of take-home treats we skedaddled outta there and went home.
ah, the perks of being magic keyholders.  the reservation system's kind of a pain in the ass, but it sure is nice to go to the parks for a few hours to soak up some magic, eat some tasty treats and go home.
at May 13, 2022