that's what the hub said when he saw my newest prized possession, the hello kitty wafflemaker. poop on him. look at how fabulously awesome this thing is. i know you're jealous: 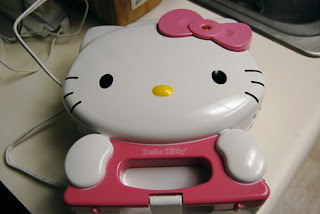 psh, whatever. i didn't hear him complaining as i mixed up a batch of "waffles of insane greatness" and served some up on a tray as he enjoyed a lazy saturday morning in bed. hmph. 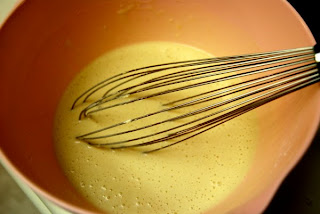 i'd had this recipe bookmarked, and i checked out other recipes that popped up as i googled "fluffy waffles," but they all required separating the eggs, beating the hell out of the whites, and folding it all together carefully. i wasn't feeling it that morning and was perfectly happy to mix up a simpler batter that suited my extreme laziness.
i decided that it was a perfect time to try out justJENN's maple bacon, too. following her instructions, i twisted the strips of bacon, laid them on a wire rack atop a foil-lined tray, and stuck it in the oven to cook as i made those happy waffles. 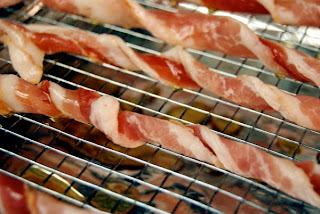 i switched the wafflemaker on, and in a few minutes, the little light (so adorably located in the middle of hello kitty's bow) shut off, telling me it was go-time. i opened the contraption and squealed at the sheer cuteness of it all. 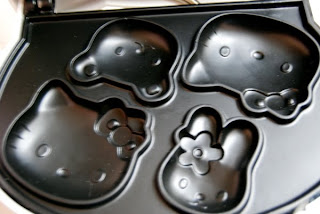 i carefully ladled in some batter and then closed the lid to let them cook to a golden brown. 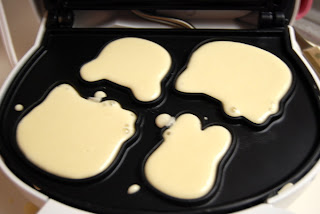 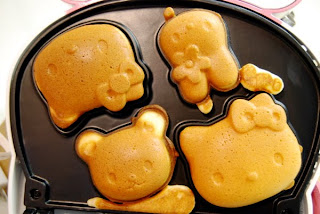 i plucked them out carefully, sprinkled a little powdered sugar on top, and voila! 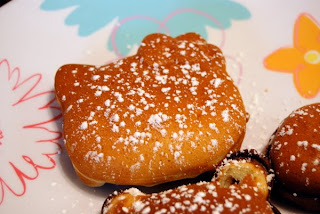 by then, the maple bacon was ready. um, this was after i had to open all the windows, turn on the ceiling fan in the dining area, and switch on the exhaust fan (which sounds like an freaking airplane is constantly taking off in my kitchen, hence my rare use of the damn thing). see that black stuff at the bottom of the foil-lined pan? i guess the excess maple syrup had dripped off of the strips of porky goodness, and combined with the fat that joined the party, it had started to burn. pretty soon, smoke was pouring out of my little convection oven, producing quite an interesting odor. dang. 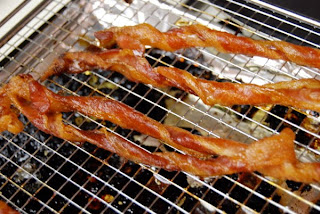 after the smoke had cleared and my family had all been fed, i finally sat down to enjoy a four-pack of waffles for myself. after cooking up several sets in my new favorite kitchen appliance (i'm currently trying to figure out other uses for it, just so i can), i'd finally figured out the perfect timing for turning out beautiful, perfect nuggets of happiness. 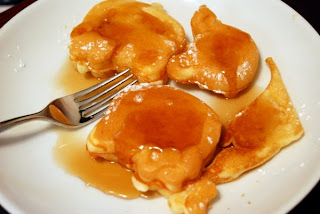 oh, and that maple bacon? really good. twisting the strips and baking it gave it the perfect texture - chewy and delicious. the maple syrup added a lovely flavor to it, too, and i think i'll have to make it more often. burning goo aside (and thank god for lining that pan with foil - perfect clean-up for my lazy ass), it was much easier to cook than on the stovetop, where i always, always get splattered with grease despite my use of one of those screen cover thingies.

as for that waffle batter, it was just a'ight. didn't really live up to its name, i thought. it was good, but when something is called "waffles of insane greatness," i'm kind of expecting the whole world to sparkle and angels to fly out of my ass as i writhe from the sheer deliciousness of it. none of that happened. looks like i'll have to cave and try out one of those more labor-intensive batters for next time.

hmmm. maybe we'll have breakfast for dinner one of these nights. hee!
at January 19, 2010

Email ThisBlogThis!Share to TwitterShare to FacebookShare to Pinterest
Labels: burning the house down, hello kitty love