so remember how i promised a friend that i'd try to recreate the jacket i embellished for the bean to wear to the fresh beat band concert?  it occurred to me last week that the big day was coming up - in fact, it's this weekend! - and i realized that i needed to get this freaking show on the road.  yikes.
i'd scoured the google for a tutorial on how to sew up a simple jacket, and after perusing this one, i felt pretty good about what i was going to attempt.  using the bean's jacket as a guide, i traced around it and cut out a pattern to use for the silver pleather i'd bought at joann's. 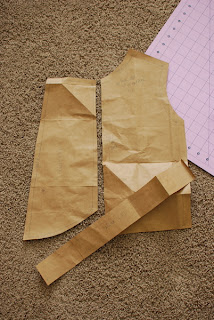 i had a full yard to work with, but really only needed about half of it.  now i get to figure out a different use for the rest of the stuff. 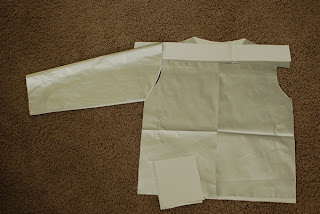 using the tips in that tutorial and using what little sewing skills i've acquired in the last couple of years, i managed to put a pretty decent jacket together.  of course, this was not without a few bumps in the road - although i'd decided to make it really simple and leave it unlined, i just didn't like how it looked with the seams for the sleeves clearly visible.  i did french seams for the sides, which always looks better to me, but i ended up scouring through my fabric stash and finding a nice length of magenta satin.  i had just enough to fully line the sleeves and the sides, but came up a bit short for the rest.  oops.  plus, the sleeves were a little too big for the opening in the jacket itself and i ended up making a couple of pleats at the top.  but i kind of liked how it ended up - slightly more girly than the original jacket i was trying to copy.  and then i realized that i'd screwed up and should've lined the sleeves before setting them in the body.  crap.  oh, well.

but i'm crafty - i decided that if forever 21 could do partial lining in their jackets, so could i.  besides, i figure that this thing's only going to be worn for a few hours during the concert anyway, right? 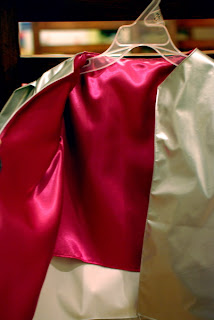 i added the stars to the front and back of the jacket, and then compared it to the bean's much nicer ready-made, professionally done jacket. 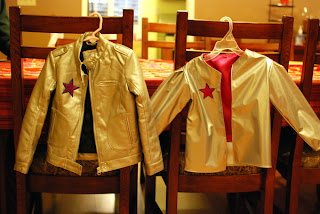 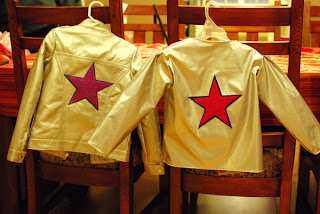 when she saw what i was doing, she was more than willing to try it on and be my model. 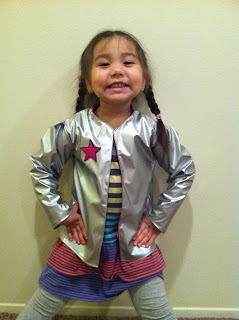 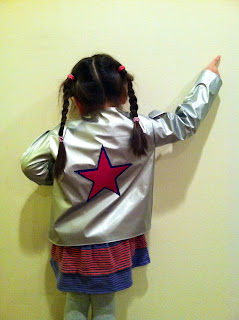 it's not too bad, right?  i skipped a collar (since the jacket that the band wears doesn't have one either) and didn't bother with a zipper or snaps (too complicated for this novice).

we put it in the mail to our friend, and a couple of days later she sent me a link to a video of her daughter excitedly wearing it.  i was so pleased to see that it fit her perfectly, and that they weren't too put off by my amateurish attempt.

so fun, right?  had i not been able to find that one for the bean, i would totally have her wear my homemade version.

oh, and i finally told her about going to the concert this weekend.  i wish i would've recorded her reaction - she lit up like a christmas tree and is so excited.  ah, it's gonna be such a great day.