it seemed like i hadn't touched any of my machines in forever - probably because i hadn't sewn anything up in a few weeks.  i have a giant stash of fabric and an endless supply of fun patterns to sew up, so i don't really have any excuses.  and a lot of that fabric is sweater knit and other cooler weather material, so now's a great time for me to dive back into my favorite hobby.

what actually brought me back to the sewing room was the need to make something for the bean to wear for her school's annual fund gala.  she chose show choir for one of her electives (glee 4 lyfe, people!), and they're always a big part of the entertainment during that evening of fundraising.  the choir director had requested that everyone wear jewel tones, which is a nice departure from the all-black attire that she'd worn for choir performances over the last few years.

i'd been holding onto a pattern for a dress i'd thought was really cute for quite a long time, and i thought that maybe if i chose a stretch velvet to work with, it would be perfect for the occasion.  it was a relatively easy project even though it involved sewing in a collar, which isn't something i'm very experienced in.  it came together quickly, but when i looked at the finished product i knew immediately that i didn't love it. 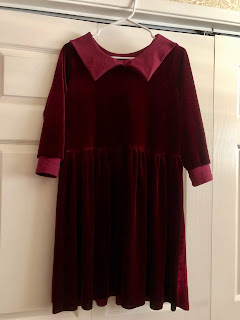 i still think it's a cute pattern in general, but the velvet is just too thick and heavy for it.  it doesn't look right, and didn't fit her right when i had her try it on.  kind of a bummer, but i'll put it in the "donate" pile and hopefully someone will like it enough to wear it.  gah!

and then it turned out that the bean didn't particularly like the design of the dress anyway.  i have to remember that she's not the little girl who i can just dress however i want to anymore.  and so i asked her to give me some ideas of what she was comfortable wearing.  at first she asked for a maxi dress, but after she showed me the choreography for the songs they're performing i talked her into going a little shorter so she wouldn't trip on the fabric at her feet.  she said she liked ruffly sleeves and a simple neckline, and then i realized that what she was describing was pretty much the same dress i'd made for her to wear to cheer "prom" this past spring.

so i headed to joann's, found some more stretch velvet that was lighter weight and closer to the color she wanted to wear, and busted this out in one afternoon: 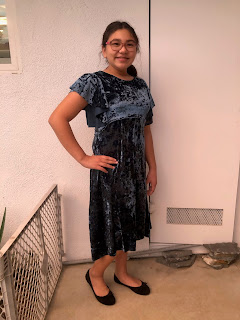 because the choir director asked for pictures of what everyone was planning to wear, i sent that one to her for her approval.  she responded pretty quickly, adding "do you do costumes too?"  uh-oh.  heh.

today is "decade day" at her school, so the kids got a free dress day as long as they wore a themed outfit.  last year she went 90s grunge with a nirvana tee, flannel shirt, jeans and docs and this year she requested a poodle skirt.  i put my embroidery machine to work and sent her to school like this: 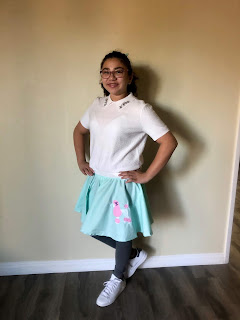 you can't see it, but i made her a matching hair tie, too. 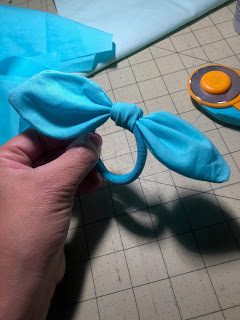 speaking of dressing up, last night's cheer practice was "tourist" themed.  after going through a pile of t-shirts and pulling out a fanny pack and finding an old disposable camera, she went dressed as a disneyland tourist. 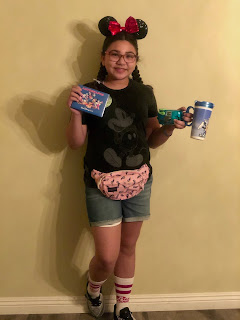 while i was at it, i decided to make myself a new top using some of the super soft waffle knit i bought for the season.  i made myself a cardigan out of some mustard waffle knit last week, but somehow i haven't managed to snap a picture of it yet.  the hub called it my "mr. rogers" sweater when he saw it, but i was super proud of myself when i told him i'd made it and he said he thought it'd come out of a stitch fix box.  anyway, this top is super comfy and got me over my fear of sewing buttons (which, as it turns out, is incredibly quick and easy on my sewing machine). 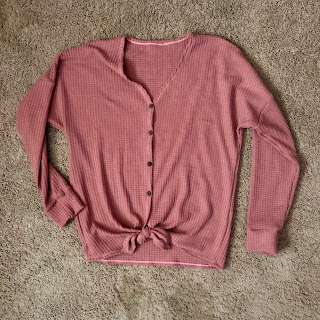