it's beginning to look a lot like...thanksmas

i'm feeling like a bit of a broken record lately, guys.  like - there's always stuff going on around here and it seems like we're always busy, but nothing really to report on.  or, maybe it's more that whatever we're up to doesn't really require photographs to share.  i dunno, man.

the bean's cheer showcase was on saturday, and it was fun - her lola came out to watch  and spend the night with us afterwards.  of course, since competition season hasn't officially begun for us yet their routines still need to be kept under wraps.  and so while i took a video of their performance, it was really just so that she could see it for herself and be able to see how it'll look to the judges and the audience and look for what she can improve on.  their uniforms aren't in yet either, but they do have their competition shoes and that's pretty much all i get to show you...for now. 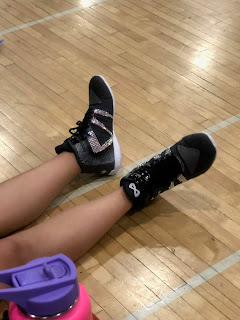 we're also gearing up for our annual family photo shoot, which is a little late this year but will be kinda cool because instead of our usual outdoor location we booked a studio session.  and we're taking the puppies with us too, and so the old lady and i found cute sweaters for them to wear. 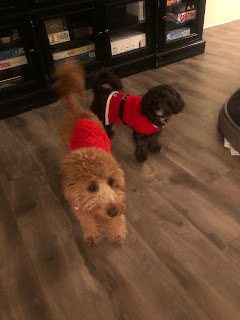 she spent a little time bonding with teddy that afternoon too.  they were deep in conversation, which lasted about three seconds before he spotted something shiny across the room and went off in search of it. 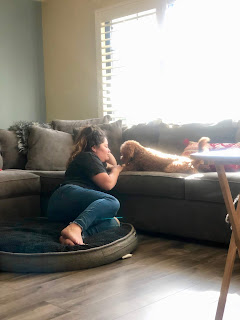 and while we do have our fall/thanksgiving decor out still, the christmas decorations are slowly but surely making themselves comfy in the house.  because thanksgiving is so late this year the season is going to be even shorter than usual and so we're just kind of soaking it all in while we can.  we're hosting a friendsgiving gathering on sunday, so the house is going to be a fun mixture of festivity.  we had fun last night getting started on some lego decorations too - this is mrs. claus: 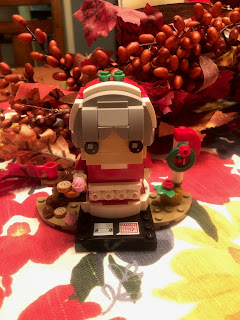 today's goal is to find and bring home a turkey that i'll be cooking on sunday.  and then i'll also need a second turkey to serve next thursday.  two turkeys in less than a week...happy holidays to me!
at November 19, 2019