i think that's the longest break from blogging i've taken in like ten years.  sheesh.

but i'm back!  i'm sure you missed me.  or not.  i don't know.  anyway, cheer competition season started this weekend.  yay!  and we got off easy for our first one...with our other comps out in vegas, san diego and phoenix we got to start off just a half hour way - in anaheim.

because comp mornings are always a little hectic, we'd booked a room at the anaheim hilton for the night before.  it's right next to the anaheim convention center, which made for a super easy and stress-free day.  the team had practice that night, so the bean and i packed up all of our stuff and then headed on down to anaheim as soon as it was over.  we stopped at an am/pm for some water and snacks and picked up some burgers at carl's jr. next door, and then we checked into our room to relax and eat. 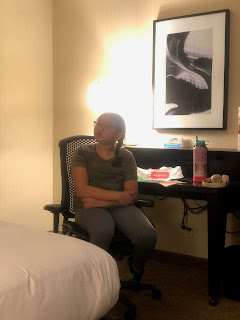 the old lady and her special friend joined us a little while later, and we all passed out fairly early.  the next morning, we ordered up some room service breakfast.  the bean went with the "mouse-inspired" waffle...guess they'd gotten into some hot water from disney when they'd used mickey's name on their menu. 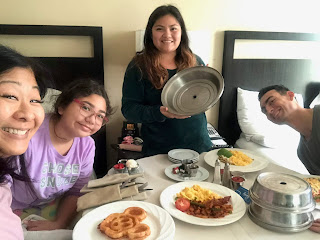 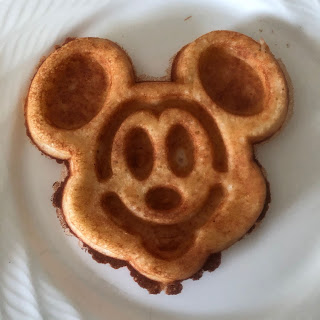 the bean had just taken home her new makeup kit a few days ago and i wasn't totally sure how the coaches wanted their makeup to look this year, so i'd put her on the list to have them do it for her.  and she's so excited because they changed up the hairstyle too - no more gigantic teased ponytail!  no more heavy, uncomfortable hairpiece!  this year their hair is much sleeker and simpler...two french braids.  but there was some sort of snafu with the uniforms, which hadn't arrived in time for this first competition.  and so i'd had to go up into the attic to dig out last season's ensemble and hope that it still fit her (it did).

while the old lady and her special friend headed downstairs to grab coffee at the starbucks, i got her dressed, packed up her sparkly new comp shoes and went upstairs to drop her off in the coach's suite. a lot of the girls were already there, dressed and made up and ready to go, and once everyone was ready they all walked down to take a group photo and find seats in the arena.

the kids and i hung out in the room sipping our coffee and relaxing until it was time to go downstairs, and then we loaded our bags into the car and headed over to buy our event wristbands. 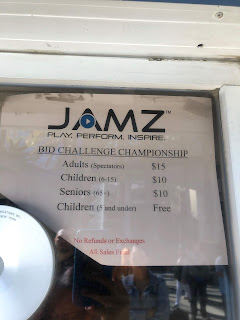 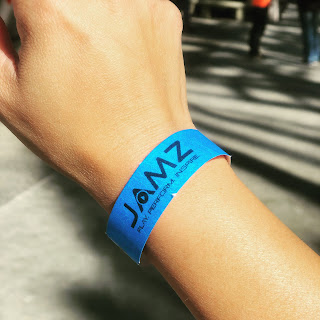 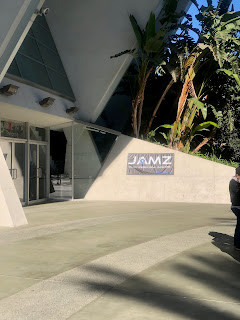 it was pretty crowded in there already, and so we found seats way up in the nosebleed section.  we could see the girls from where we were sitting. 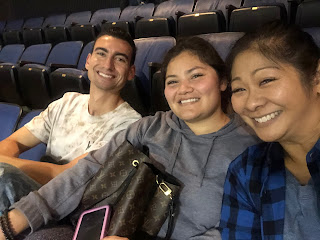 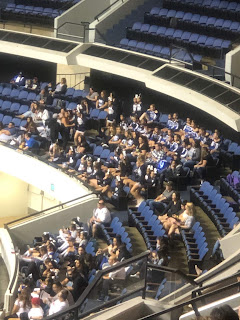 as usual, they were running about 20 minutes behind schedule and so it was a good hour and a half before the girls finally took the stage.  i headed down to the sidelines to watch, and cheered as i tried to watch them while taking still photos (knowing that the old lady and the hub were upstairs taking video from a higher, better vantage point).  i love watching her perform, and the dance portion of their routine is always her favorite part.  she's always beaming during this part, and i'm so happy that she's right in the middle for it. 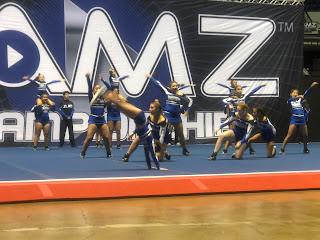 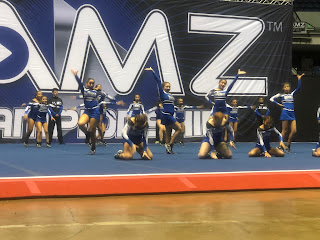 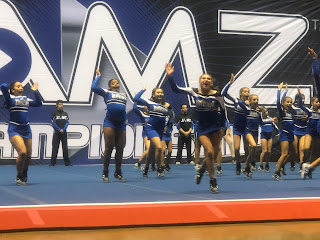 from where i was watching, it seemed like they'd managed to nail the routine...but i found out later that a couple of girls had wobbled a little during a couple of the stunts.  nothing major, but enough for the judges to deduct points from their score.  i found them just outside of the arena, and hugged my girl and told her what a great job they'd all done.  she'd been so nervous. 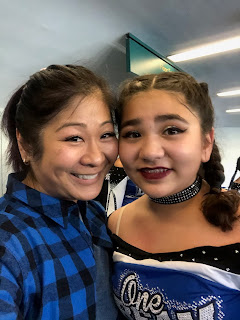 they were among the last few teams to perform for that session, and the awards ceremony started not much after they walked off the mats.  they headed down to find a spot near the floor along with all of the other teams to wait for their division to be announced. 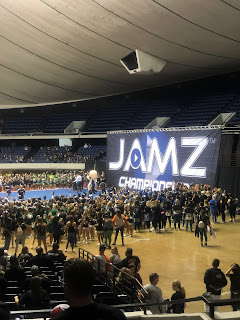 there'd been five teams total in their division, and the one that they'd anticipated as being their biggest competition had done a pretty outstanding job with their routine.  and so we weren't too surprised to hear that they'd taken second place.  but everyone was really happy to have placed in the top three, and we were all super proud of them. 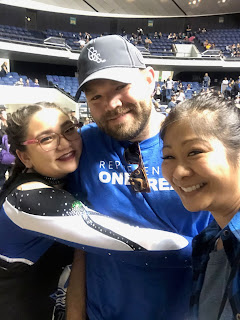 i got her to take a picture next to one of the many christmas trees back at the hilton before we headed on out to hop into the car and go home. 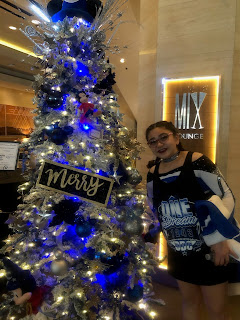 and now they go back and practice even harder for the next competition.  next up, vegas in december.  get ready, sin city.  the girls are comin' for ya.
at November 25, 2019