living on lockdown, day one

having returned from disney world, where we did our best to keep our distance from people but were still essentially exposed to a lot of them, the bean and i were prepared to hunker down at home for a good while.  i knew we had to do our best to keep to ourselves, and besides, the notion of having an excuse to stay home was not a terrible one.  i have stacks of magazines to catch up on, a couple of books i haven't read, piles of fabric and tons of patterns to sew up, lots of shows on the DVR and the netflix queue to binge watch...the list is endless.  we all know i don't bore easily because there's always something i can or want to do.

on our first morning of lockdown, teddy was excited to help me unpack my suitcase. 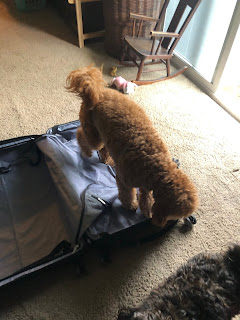 it apparently took a lot out of him, because the next thing i knew he was relaxing on the couch - which is currently in the back yard while the remodel continues. 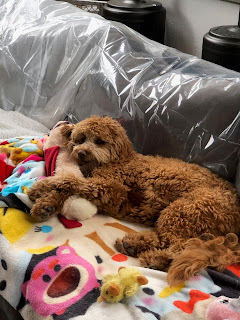 cocoa was around too, but that little girl moves around so much and so fast that it's hard to get a decent picture of her. 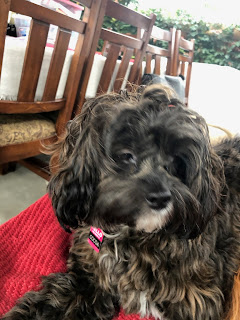 when i took my place on the couch, they both came over and got started on making up on lost time together.  i love when they snuggle with me like this. 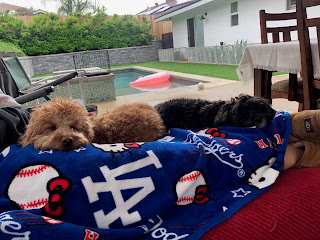 "distance learning" with the bean's school wasn't scheduled to begin until wednesday, which gave her two full days of just hanging out at home.  it was kind of like a mini spring break, which isn't actually scheduled to happen until mid-april.  the teachers were taking the time to figure out how they wanted to structure their online classes, which would be done using a block schedule.  the kids would have three classes per day, alternating subjects every other day and meeting online using zoom tuesday through friday.  mondays are to be used as catch-up days, time to ask questions, turn in assignments online using google classroom.  and on class days they start at 8, with each class lasting an hour with a half hour break in between.  it's a pretty sweet setup, really.  and i'm grateful that her school has it all figured out in such a timely manner.

so she was really enjoying the extra time off.  and i had to take this picture of her because she'd somehow managed to get a piece of her leftover disney world cotton candy stuck to her forehead.  still don't know how that even happened. 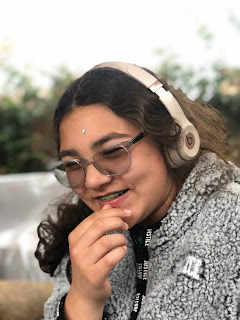 later that evening, she decided that she wanted to give teddy a bath.  we told her to be careful about getting water in his ears and she disappeared into the bathroom and came out with something to help with that: 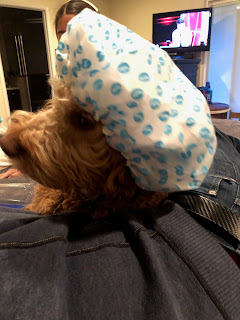 he wasn't particularly happy with the solution she'd come up with, as you can see.  and he was even less so when he emerged from the bathroom soaking wet. 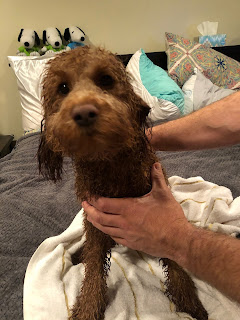 i ended up using the blow dryer to try and get him dried off, which he absolutely hated.  but at least he smelled better when it was all done.  cocoa managed to escape the same fate, because we all have some PTSD from the one time we bathed molly ourselves and ended up giving her an ear infection.

and then later that evening, i checked my email and found this: 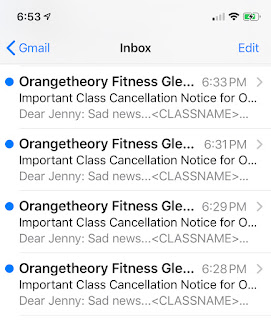 while i'd been expecting it, i was still pretty bummed to see confirmation that the orangetheory studio was shutting down due to this stinking virus too.  i mean, it makes sense and i know it's for the greater good.  blah.

oh, and lastly - i'm thinking of my dear auntie today on her birthday up in heaven.  it's hard to believe it's already been three years since we said goodbye to her, and i hope she knows how much she's loved and missed.
at March 25, 2020

Email ThisBlogThis!Share to TwitterShare to FacebookShare to Pinterest
Labels: quarantine