working off dinner even before eating it

my most favorite part of epcot center is the world showcase.  thirteen different countries are represented there, complete with replicas of famous landmarks, food, drinks, and cast members from each respective country?  yes please!

i somehow managed to talk a whole group into heading over there after the awards had been announced.  the cheer coaches and their family, the bean's friend and family, plus a handful of teammates who'd come without their parents and therefore were under the watchful eye of the coaches all decided to follow my lead and have dinner at teppan edo, in the japanese pavilion.  i'd tried to snag a reservation but nothing had come up, and with so many people making changes to their disney vacations the phone lines were all jammed.  and so we decided to just head on over there and see if they might take us anyway - and if not, we knew there were lots of other options available to us.

the bean and i had been taking a lyft everywhere thus far, but with this group of 17 people we had to settle for waiting in front of the lobby for disney world's free bus transportation.  it took quite awhile for one of the epcot buses to arrive, and i was getting a little worried because it was already 7:00 and the park closed at 9.  yikes.

we finally arrived around 7:30, making our way through security and past the turnstiles and then following the signage to the world showcase. 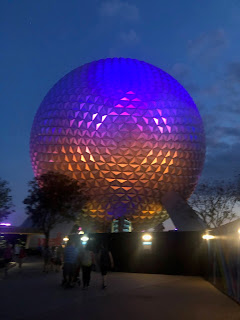 there were a bunch of construction walls up everywhere, and since it'd been about 5 years since my last visit i was a little discombobulated and didn't really know any short cuts or anything to get to where we wanted to go.  it seemed to take forever, and with the flower & garden festival happening there were quite a few people there checking out the displays and enjoying the food and wine kiosks.

of course, the japanese pavilion was pretty much right in the middle of the world showcase.  it was quite the walk, and i could hear grumbling behind me from kids and adults alike.  heh.  we were all relieved when we finally got there and i headed straight to the podium to talk to the cast member stationed there to see if we could get in.  after communicating with the folks upstairs in the restaurant, she eventually smiled and nodded at me as she hung up.  we'd have to split into two tables and wait about half an hour, but they were able to take us even though we'd be seated just before closing time.

while we waited, we went inside mitsukoshi department store to do some browsing.  the bean liked these hoodies: 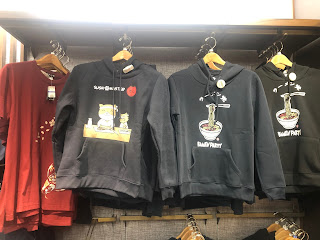 while i reminisced as i eyed these monchichi dolls that i remembered wanting really bad when i was little. 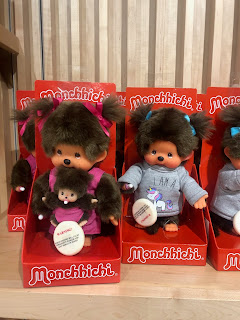 the pager finally went off, and we all headed upstairs to be seated. 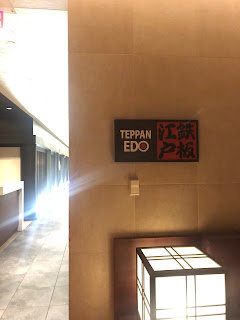 everyone was pretty relieved to finally sit down and eat.  most of them hadn't had lunch that day, unlike me and the bean's buddy. oops.  but i think they were all happy once the show started.  and here it was no ordinary onion volcano!  nope...this is disney, after all.  here the onion was shaped like olaf: 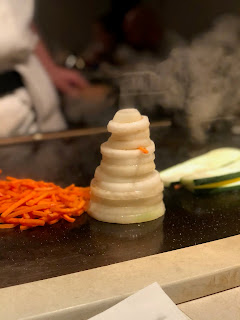 and i took this only because i'd never seen anyone place a sushi roll onto the grill before.  there it sat while the chef grilled some scallops, chopped them up, mixed them with some spicy sauce and scooped the whole concoction on top of the roll before serving it up. 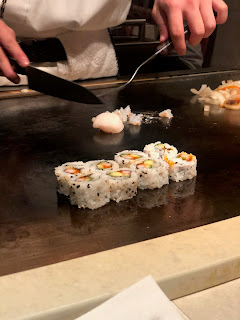 instead of fried rice, we got stir-fried udon noodles with grilled veggies. 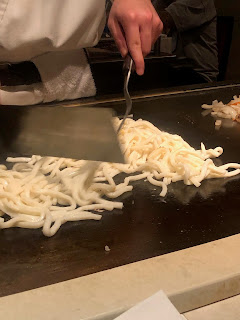 the rest of the meal was pretty standard, served with the usual soy-ginger and mayo-based sauces.  everyone seemed satisfied and happy with dinner, but not before giving me a little ribbing for all the exercise they'd endured along the way. 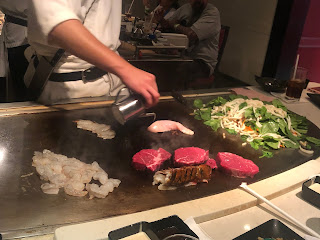 the park had been closed for awhile by the time we finally emerged from the restaurant, and we all tried our best to take as many pictures as we could in the empty park.  it wasn't easy as we had a cast member following us the whole time to make sure we actually left, and because it was so dark most of my pictures came out like crap anyway. 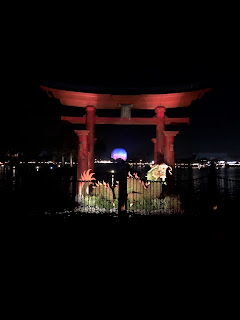 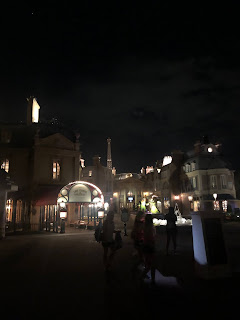 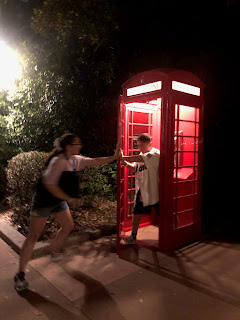 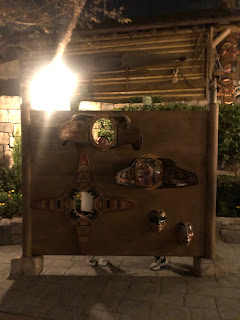 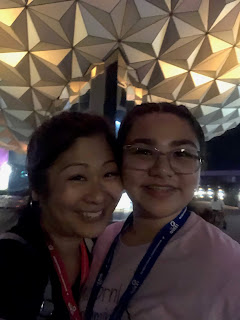 since we'd skipped dessert, we stopped in the food court before heading to our rooms to grab something sweet.  i'd been wanting to try one of their cute cupcakes since our first night, and snagged this hot chocolate treat: 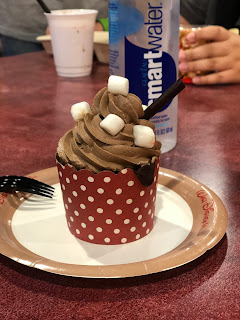 and when we got back upstairs i was helping the bean put her stuff away and caught sight of her uniform, which she'd likely already worn for the last time.  the last competition they were signed up for had already sent out a notice of cancellation, and so i decided to do this: 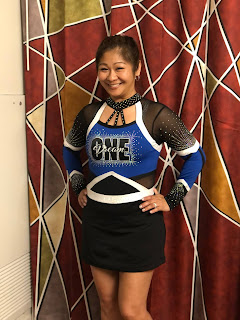 the bean alternated between rolling her eyes and cracking up at my shenanigans, especially when i attempted a heel stretch (which i failed miserably).  but hey - it made for a fun photo op.  and that was the end of night #3.
at March 19, 2020