cookie season is finally winding down, thank goodness.  and because of extra cheer practices in preparation for our florida trip, the bean hasn't been able to work at as many booths as she used to in previous years.  kind of a bummer, considering that i was looking forward to her being able to spend a little time with her two besties since they aren't at school together anymore.  plus, a lot of the booths that our troop was able to get start at 3:00 - which sadly doesn't work because she doesn't even get out of her last class until that time.

she finally got to work a weekday booth last week along with one of her buddies thanks to early-out wednesdays, though.  and then on saturday she was super stoked to reunite with her very best friend, selling cookies at the grocery store while chatting and hugging as much as possible.  the third musketeer even showed up for a quick visit, which made for a fun added bonus.  it was really sweet and also gave me a chance to spend some time catching up with both of their moms, who are some of my favorite people. 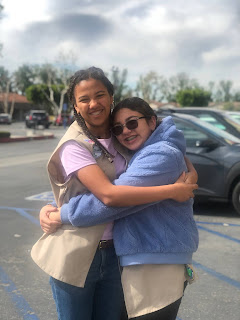 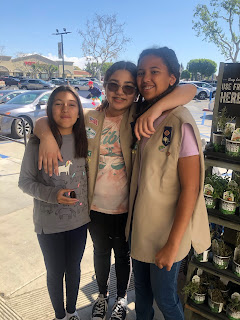 when the booth was done, we headed down to the mall to drop off my laptop.  i don't even know what happened to it, but i went to do some stuff on it and opened it up, i'd found this:

luckily, there were plenty of appointment times available for me to take it to the apple store.  and the bean was extra excited because that meant that we could grab some sushi at her favorite spot.  once we left the apple store and headed towards the restaurant, something caught her eye - a girl scout cookie booth set up right in the middle of the mall.  and i wasn't really planning on stopping until she reminded me that since we were in orange county they had flavors that our council doesn't sell.  as we chatted with the girls working the booth and browsed through their selections, one of the girls' moms came over and i realized that it was andrea barber - aka full (and fuller) house's "kimmy gibbler."  she was dressed casually, just as you'd expect, and she was fresh-faced without makeup...and still instantly recognizable.  heh.

we picked out our cookies and then i stopped to chat with her a bit, asking her if she was still running races and mentioning that we'd met at the hollywood half a couple of times, and she was just as sweet and friendly as always. 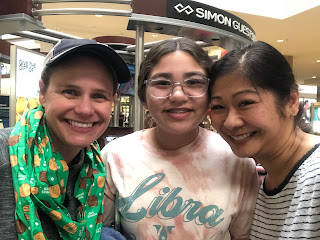 by then our table was ready over at kura sushi, and so we made our way upstairs and happily sat down for some grub. 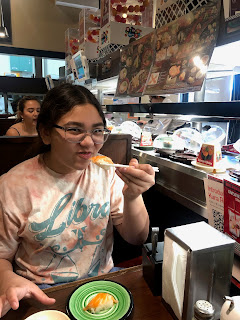 on our way out we peeked down at the booth again, like creepers. 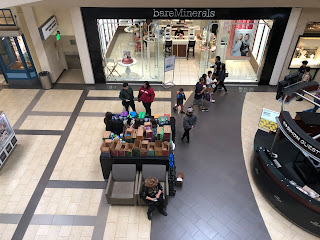 later that evening we headed back out to have some korean bbq with the hub.  when we were seated i noticed this at each place setting, which made me smile and a little sad at the same time. 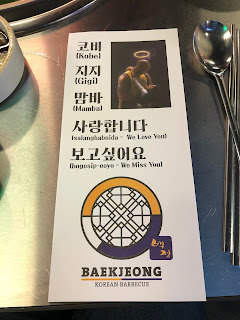 dinner was delicious as always, and i was super amused when the hub said "here!  we need a picture with this guy." 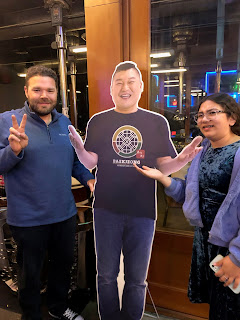 the bean had requested boba for a final stop before going home, so we headed over to the happy lemon for some dessert.  she picked up a piece of cheesecake and i ordered a chocolate bubble waffle to go with our delicious cream-topped drinks. 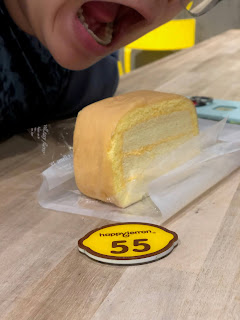 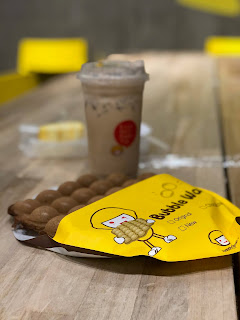 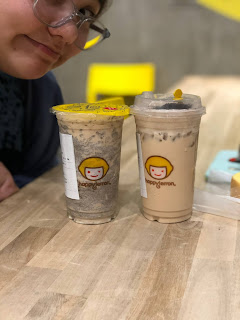 we packed a lot of fun in one day, didn't we?  it's all in an effort to get us out of the house, where we're wrapping up our first week of living in two rooms and the garage.  heh.