the house is coming along, slowly but surely.  actually, i guess it's moving along a little faster than i'd imagined.  i don't know what exactly i was imagining though, but it's been really fun to watch the progress day by day. 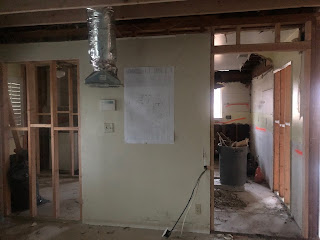 looking at it from that new door, you can see what used to be the laundry room being re-walled for the guest bathroom.  it'll be small, but just enough room for a sink, a toilet and a shower.  we squeezed in as much space as we could without actually blocking the window, which is going to stay as is. 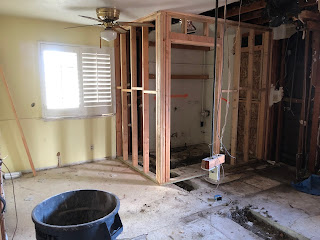 look at what used to be my kitchen!  the bean said "ohhhh, look...that's where i used to make my toast!" while i gazed at the spot where i spent hours and hours working on cookies.  it's really weird.  this is going to be the guest bedroom, which we'll move into once it's done while our bedroom gets a little updating. 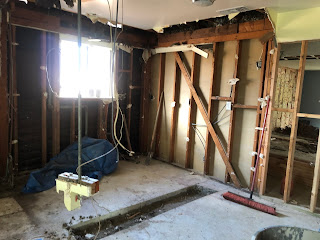 here's where the kitchen, laundry room and powder room are going.  kind of hard to see right now, but i'm getting an island in that kitchen which i'm super excited about. 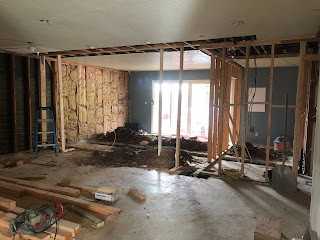 and the old sliding door that led to the side yard that i always hated because it was so finicky and hard to open and close is gone.  they're framing it now for a new window, where the dining room will be.  and the blue wall on the left there will house the built-in bar that the hub is happily designing. 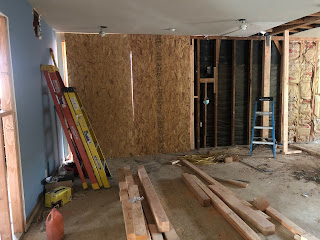 i still don't really know what our projected date is for it to be all done.  but we're doing our best to get everything that we need to pick out all ordered and ready for the contractors once they're ready for it. this is the fun part - paint, cabinets, where to put outlets and switches, countertops, bathroom faucets, sinks...all that good stuff.  and in the meantime, the dogs seem to have adjusted nicely to our new normal.  i'm thinking they probably actually like it better this way because they get to spend lots of time snoozing on the bed. 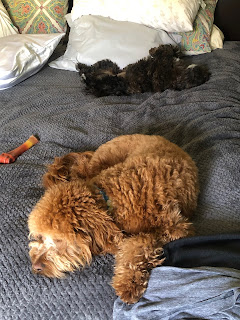 and that's your house of wan renovation update for this week!
at March 11, 2020