once upon a time, there was a girl who had tried two different barre studios but didn't love either one.

and then like magic, a new studio opened up a mere ten minutes away from home.  i decided that third time had to be the charm, and happily accepted an invitation to a soft-open barre class.  they were still putting the finishing touches on the studio, and before that class started i even got to leave a little note and my autograph on the wall before the last mirror was put into place.  this was back in june 2013, and it was just the beginning of my love affair with xtend barre.

i was totally and completely addicted to those classes.  all of the instructors were awesome, each offering their own spin and difficulty level.  it wasn't long before i knew whose class i wanted to take when i wanted a challenge, or when i needed to take it easy, or if i just wanted a good old-fashioned asskicking.  like any good cheerleader would, i did everything i could to promote the studio - posting pictures on social media, writing blog posts, referring all of my friends to come and try a free class.  and you know how when you see the same people on a pretty regular basis, you eventually become friends with them?  that happened for me at xtend, with a few of the instructors and other members as well.  and i dragged the girls and even the hub to at least one class. 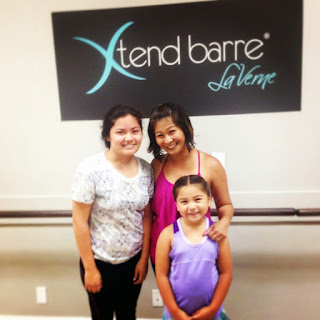 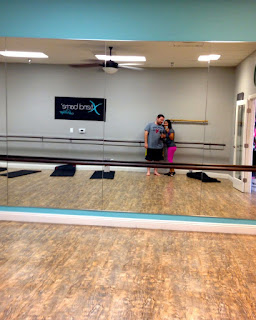 the studio eventually changed hands, with a former member taking over the reins.  we saw quite a few instructors come and go, but it was still my happy place because my favorite ones were still there.  the new owner was wonderful and friendly and attentive, and everyone really liked her.  not too long after she took over, she made the decision to break away from the xtend barre family and create her own studio.  she was super excited about the change, because it gave her the freedom to allow her instructors to create their own classes instead of having to follow the xtend formula.

fast-forward about three years, and because of personal circumstances the studio saw another change in ownership.  plus, even more of my favorite instructors were gone.  gah!  and once that happened, the vibe in the studio was completely different.  the new owner was rather aloof and unfriendly - or, at least, that's how she came across to me.  the first time i ever saw her, she brushed right past me without a word or any sort of acknowledgment whatsoever.  and i don't think she could pick me out of a lineup if she had to.  she brought in new instructors and some very different types of classes - which, honestly, should be a good thing.  and in all honesty, especially when it comes to something i really love, i'm not all that good with change.  but i did give the new classes and instructors a chance, i really did.  not surprisingly, i wasn't a fan of the non-barre classes.

by then, there was only one OG instructor left.  a former ballet dancer (like, a legit one!), she was also working at a local ballet studio along with teaching barre classes.  i loved her, and we became friends despite the fact that i'm probably old enough to be her mother.  heh.  through the years i saw her go through wedding planning and then her first pregnancy, and when she went out on her second maternity leave in november i was excited for her but also selfishly really bummed because i knew i'd really miss her classes.

in her absence i made it into the studio on average once a week, still trying my best to find the classes that worked best for me.  it was a lot less than i was used to, but i also had orangetheory sessions to keep me sweating.  then as we all know, in march covid hit and gyms and fitness studios (along with pretty much everything else) shut down.  luckily, zoom came to the rescue and the studio started offering virtual classes with the instructors teaching from their homes.  it wasn't the same by any means, but it was still effective and provided a good workout.  and even better, in april my other favorite instructor who'd moved up to seattle to manage an orangetheory studio started teaching virtually AND the ballerina came back from maternity leave.  i was such a happy camper. 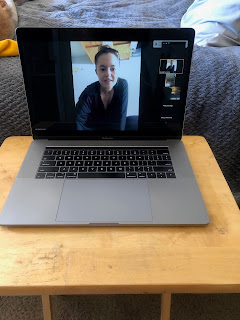 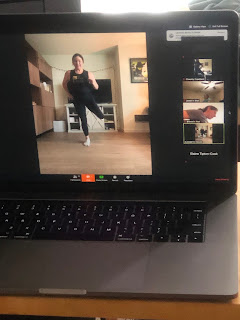 it only lasted for a couple of months.  and then we had that brief window of time during which gyms and fitness studios were allowed to reopen -and then quickly shut down again.  in june, my seattle instructor (who'd been teaching for free because she missed us so much) quietly took herself off of the schedule once she learned that the owner was ignoring indoor mask requirements and continuing to offer in-studio classes even after the shutdown order.  members were advised to use the back entrance to the studio, parking behind the building and a drape was drawn in the front window to hide the blatant disregard for the rules set by the local public health department.   and then in july, ballerina also mysteriously disappeared from the schedule of classes - both virtual and in-studio.  i asked the owner if she was coming back on one of her instagram posts, and she responded via private message. 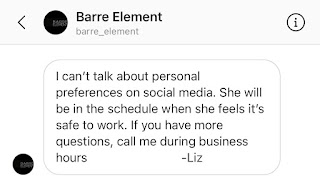 i found that very telling - that ballerina was also concerned and putting the safety of the members, plus that of herself and her family, ahead of her job.  in a time when the pandemic is keeping people from bringing home a paycheck, she was opting to do her part and keep everyone safe.  and so after some thought i responded with this: 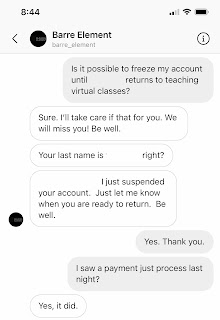 seems fine and dandy, right?  and then it took a weird turn: 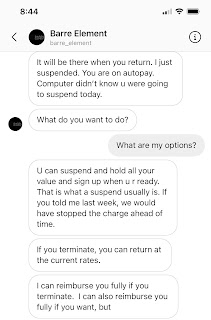 as i read her responses, i was struck by her brusque tone and unprofessional demeanor.  like, really - "computer didn't know u were going to suspend today"??  WTF?  the tone in her private messages was so completely opposite of the sweetness and light that she portrays in her social media posts to the public.

and then it just continued going downhill.  the comment about processing fees and the lack of proofreading for simple typos before sending a message to a client who's paying actual money was such a turnoff, and i decided immediately that i was done. 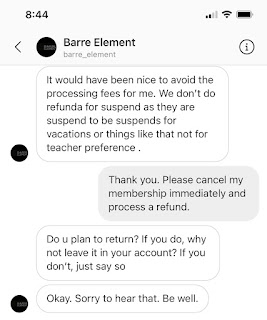 after seven years and more than 750 classes, that was it.  although it sounds a little ridiculous, i went through a bit of a mourning period after that.  i mean, like i said - i'd been so happy there for so long!  i'd been struggling with the decision to cancel for a long time but with no classes from my preferred instructor on the schedule for the foreseeable future on top of my growing dislike of the owner, it ended up being easier to do than i'd thought.  i was over giving any of my pennies to a business who not only doesn't value loyal clients but also blatantly disregards safety and public health.  screw that nonsense.  as a small boutique fitness studio in los angeles county, it isn't even supposed to be conducting classes indoors.  at best, they could offer socially distanced sessions outside, like in the back parking lot.  but no:

and a look at the app confirmed it, with separate sections to sign up for virtual classes and in-studio ones.

even to this day, it's obvious that they're continuing to flout the most basic of pandemic guidelines.  clients are still parking in the back with a nice heavy curtain blocking any view from the front window.  i happened to drive by one morning earlier this week and confirmed it. 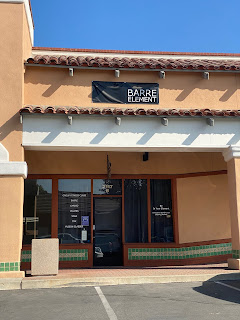 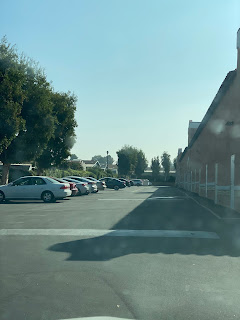 in other news, my ballerina friend eventually found a fun outlet for her creativity, offering customized beaded bracelets using instagram as her main source of advertisement.  i placed an order as fast as i could and then posted a photo once i received it. 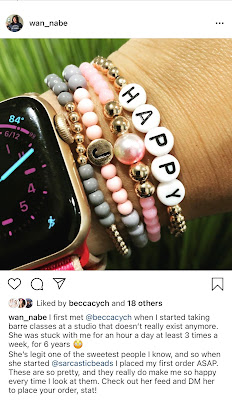 i thought nothing of it until this weekend, when i received another private message from barre element.

it actually took me a bit to decipher that first message, which came immediately after the notification that the studio had just clicked on the "follow" button on my profile.  and then i had to laugh because she had so completely misread my wording on the post she was talking about.  after all, the studio that i started at and met my ballerina friend was indeed gone - replaced with this new version that bore no resemblance to my former happy place.  i briefly considered explaining it so that she would understand what i'd really meant, but ultimately decided that it wasn't worth the effort.  and yes, i absolutely did block the account.  i don't need to see or hear from her ever again.

not to worry, liz with barre element in la verne, california.  i most certainly will never come back.