did you know that there's such a thing as a gelato festival?  apparently it's an annual event in l.a. where chefs from all over the country compete for a chance to move up to a world masters event or something.  i don't know.  all i saw was "gelato festival" and that they were doing a virtual version of it and i was like "I'M IN!"  and it also happened to be the very last day they were accepting orders, so it was clearly meant to be.  heh.

about a week later this box was delivered: 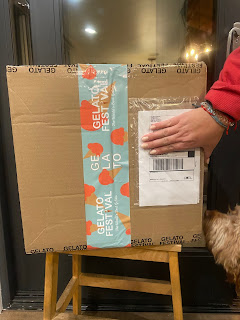 we opened it to find this: 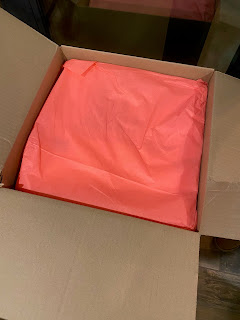 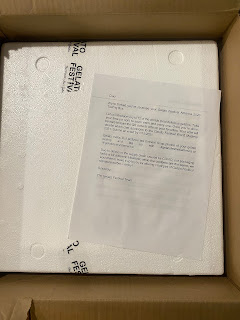 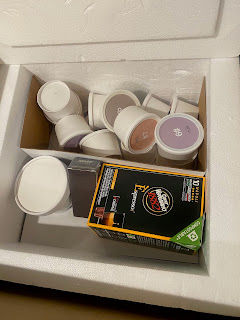 the box was packed with dry ice to make sure there wasn't any meltage (which isn't a word, i know, but i just made it one) and then we put all of the little cups in the freezer until we were ready to do our official tasting.  that didn't happen until christmas night, when we finally decided to bust them all out and get down to business.

we laid them all out in order and checked out the list of flavors to see what we were getting ourselves into: 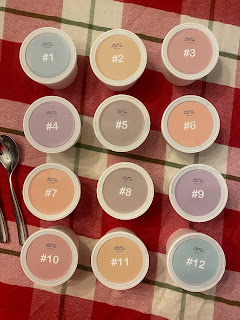 the first one ended up being my favorite. it was called vegan coffee cream, made with oat milk, raw sugar and espresso.  i've discovered that i really like oat milk in my latte, so i wasn't too surprised that i liked it. 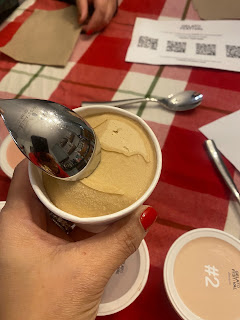 the next flavor was a light, lovely citrus flavor topped with sliced almonds.  it made for a great palate cleanser. 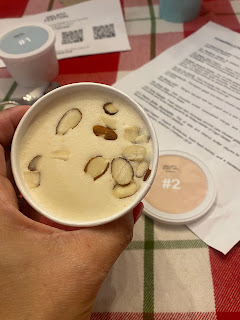 then we had another vegan flavor, called the "magic twist."  this was chocolate gelato with edible glitter and gluten-free pretzels.  it was...okay. 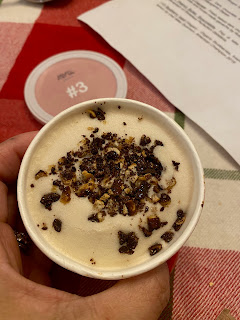 number four was a panettone-infused gelato.  this, too, was just a'ight. 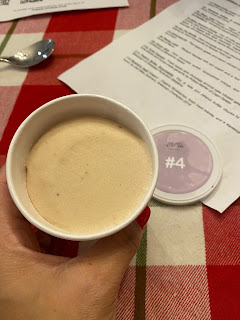 the old lady really enjoyed this italian rainbow cookie flavor.  the base was fior di latte gelato, which we later learned translates to "flower of milk" and is a super milky flavor. it had crushed homemade italian 7-layer cookies mixed in and topped with chocolate, raspberry syrup, fresh raspberries, chocolate shavings and sliced almonds. 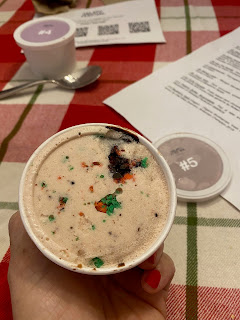 "into the woods" was a dark chocolate gelato with miso chocolate ganache and a tamari black cherry topping.  i didn't expect to like this one because cherry is probably my least favorite flavor, but i didn't hate it.  the cherry wasn't very noticeable, and all i tasted was a deep, dark chocolate. 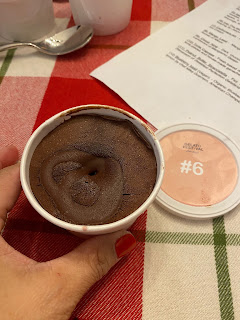 the next flavor was the one i was most intrigued by - "carbonara-ish" was described as a parmigiano gelato with bacon infused caramel.  and yes, it was a little weird - but in a great way.  i really liked it and counted it in my top three favorites. 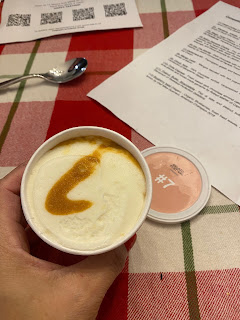 the "mango lassi" was another flavor that i didn't anticipate liking very much - mangos blended with tart yogurt with a touch of cardamom.  but i was wrong, because it was very pinkberry-ish, lightly flavored and really refreshing.  i think this one was the bean's number one favorite. 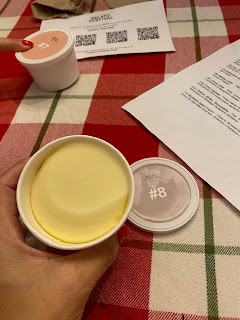 "cloud nine" was dark chocolate sorbet with caramelized orange and cantucci, which we had to look up before trying (it's a crunchy cookie made with almonds or hazelnuts, pretty similar to biscotti). 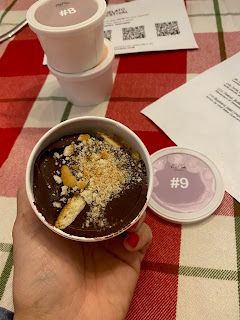 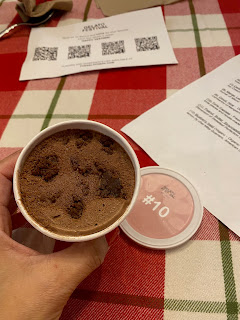 this one was a big hit for all of us.  the peanut butter stracciatella was another fior di latte gelato based flavor with chunks of peanut butter, and it was really delicious.  you wouldn't think of peanut butter as being a delicate flavor, but in this case that's exactly what it was.  just delightful. 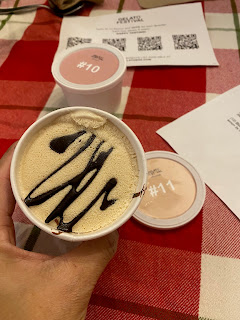 the final flavor was another one that i figured i wouldn't like - and i was totally right this time.  this vegan blueberry basil smelled really pretty, but the basil was really overpowering and i don't think any of us really liked it.  sorry, chef guerrero - who, as it turns out, was the american champion from 2019.  dang. 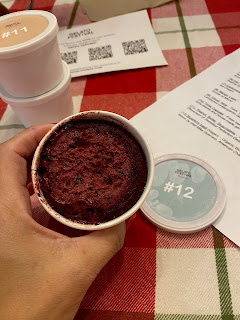 it was super fun, and hopefully by next year things will be somewhat normal again and we can actually attend the gelato festival in person.  and if not - well, we'd definitely be open to doing this at-home version again.  because duh...gelato.  yum.