stressing out over scoring tickets on ticketmaster is always worth it when concert day rolls around, amirite?  i'd managed to snag some for BTS' mini residency in vegas...four shows spread out over two consecutive weekends, timed to coincide with this year's grammy awards at the MGM grand.  they were up for their song "butter" this year, and the bean was super excited that they were going to be performing at the ceremony.

the timing was perfect for us, because the second set of weekend shows happened to fall at the start of the bean's spring break.  our tickets were for friday's show, which was also good friday and her first day off from school.  and so we got ourselves all packed up and in the truck nice and early, hitting the road by midmorning. 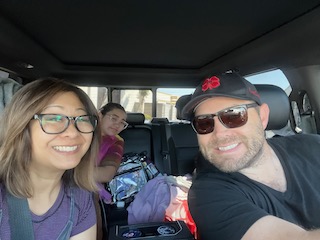 we hit some traffic but also stopped for lunch, so it was a little after 3 when we finally pulled into vegas.  the bean got super excited when we passed allegiant stadium, where we'd be in just a few hours to see her beloved bangtan boys. 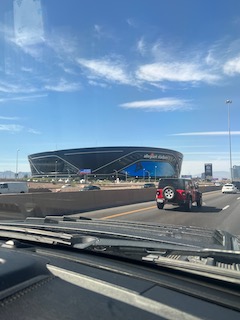 this was our home for the weekend - the conrad hotel inside resorts world on the fabulous las vegas strip. 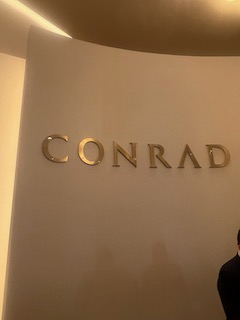 i'd scored four tickets for the show, so we invited our friend lilcee (also a proud member of BTS army) to join us.  she gathered up her little family and they drove out to vegas around the same time as we did, walking into the hotel lobby just as the hub was at the front desk getting us checked in.  we had just enough time to get into our room, unpack, freshen up and get ready for the concert.  and i was excited to finally have a reason to wear my sparkly hair clip featuring the name of my favorite BTS member.  shut up. 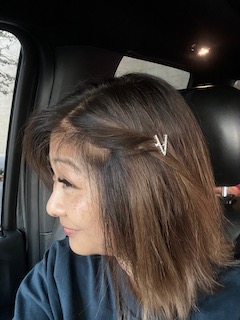 and i was wearing all of my purple bracelets for the occasion too. 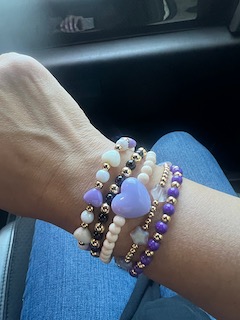 the merchandise tents had opened to the public early - we're talking 10am.  and people had lined up for hours before that to get their hands on all the best stuff.  crazy. 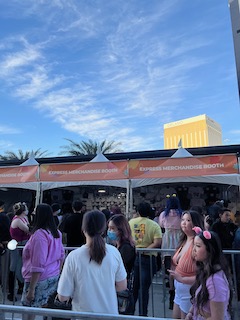 we were really amused to see this guy walking around in full BT21-inspired costume. 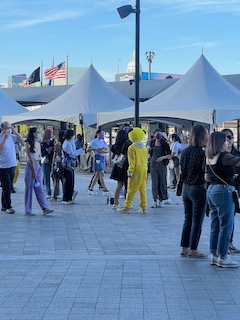 once you get inside the stadium, there's no question as to whose home it is.  and it was very different from being at sofi stadium, where the employees couldn't have cared less - all of the staffers we encountered here were very proud of their place of business and were happy to help when asked.  it was a really nice experience. 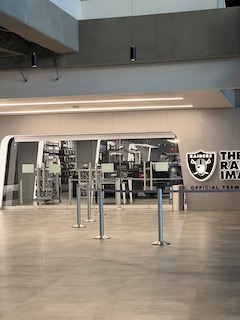 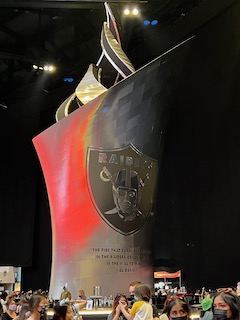 the tickets i'd gotten us offered us a view that was pretty similar to that we'd enjoyed at sofi stadium in november.  not bad, not bad at all. 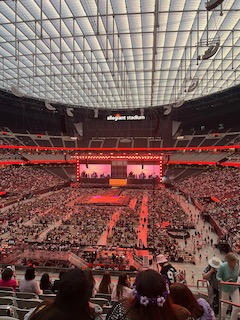 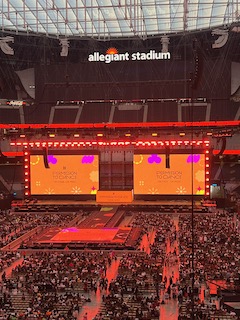 the hub volunteered to take a walk around and see what kind of food and drinks he could find for us.  he came back bearing burgers and fries from guy fieri's tailgate kitchen, plus this "purple dynamite" cocktail - vodka, lemon and simple syrup with a sprite topper garnished with lemon and a cherry.  it was actually really tasty. 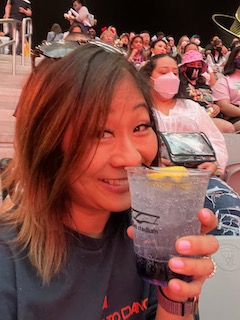 i promise she was way more excited to be here than she lets on in these photos. 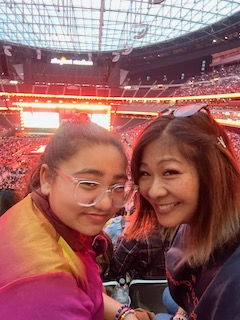 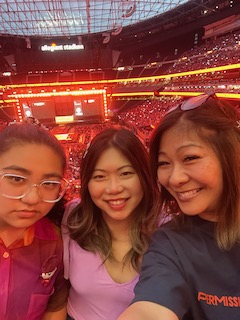 especially when the lights went out and the show started. 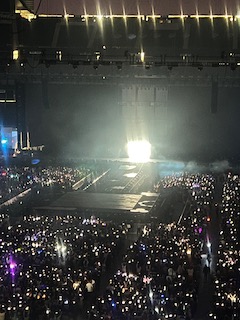 while it was pretty much the same show as the ones they'd done in l.a., we still enjoyed every second of it. 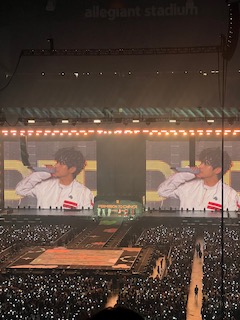 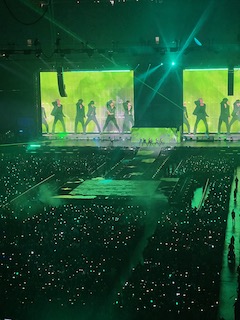 the entire arena lost their minds at the sight of jungkook and his crop top. 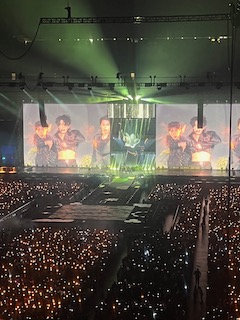 and just like in november, the group split in half and boarded these orange vehicles to do a slow tour through the arena and give the fans a chance to see them up close. 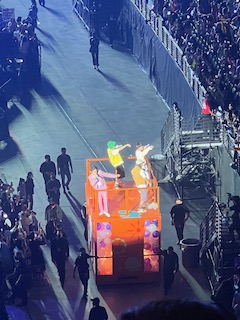 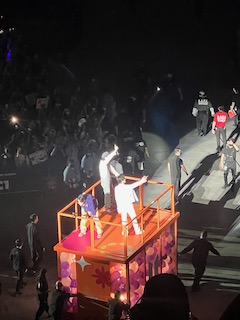 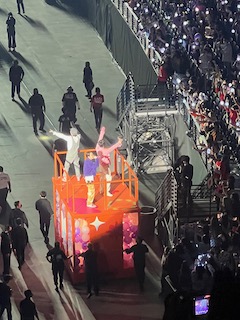 they used the runway to get to the second stage often, much to the delight of everyone down on the floor. 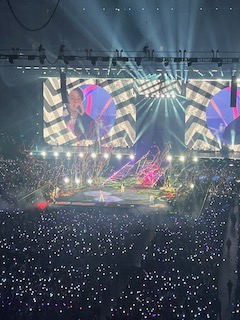 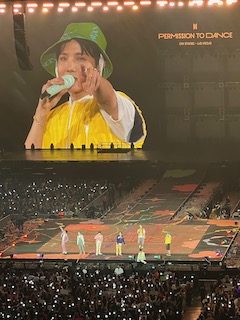 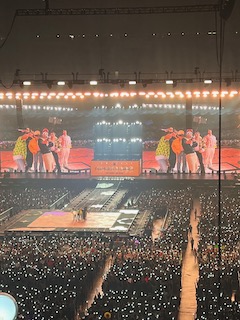 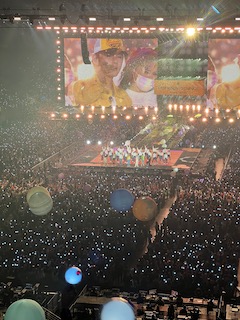 and then, all too soon, they were on the last song of the night and taking their final bow. 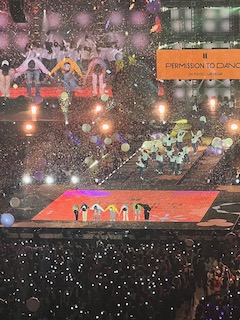 the hub, who'd spent most of the show up in the bar and chatting up a few of the stadium staff, came back down to join us when it was all over. 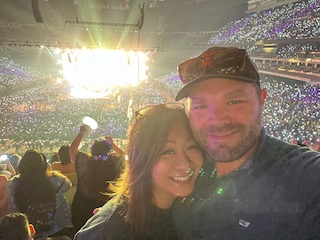 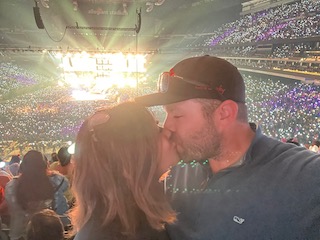 it had been a long day, capped off with a bang.  and we were back in our room by 11:00, exhausted and ready for bed.  the hub, who comes alive at night in vegas, was happy to walk us up and then head back downstairs in search of a spot for his cigar and a little poker.  lilcee headed to the food court, where she picked up some filipino food that she dropped off for us on her way back to her own room.

and that's how we ended our first day of spring break. 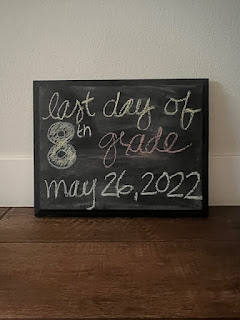