these days, it seems like it's all junior league, all the time. and i gotta admit, i kinda like it - having almost-weekly gatherings with a lot of potential new buddies to look forward to is pretty fun, and it's nice to get out of the house too.

i invited my friend amber, who lives locally, to join me at last friday's GTG - mingling and hors d'oeuvres at the JLP house, and then taking part in pasadena's art night. it was a free evening of admission to several museums in the area, with a free shuttle that would take groups from one venue to the next. since the JLP HQ is within walking distance to a couple of the stops, the plan was to set off on foot and hit at least a couple of museums before the end of the event.

amber and i met up at starbucks first, to grab a nice warm coffee and chat for a bit before hopping in one car to head over. we discussed our hellish weeks, caught up on what was going on, and then we were off.

inside the HQ, we made small talk with a few JLP members before it was time to go. it was a short walk to our first stop - the pasadena museum of california art. as many times as i've driven through this area, i never even knew this place was here. heh.

we were given these little button-thingys to wear, designating us as art night attendees. 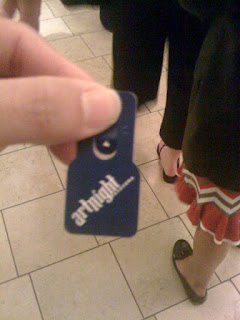 pretty much the only picture i took - duh, it's an art museum. no photography allowed. 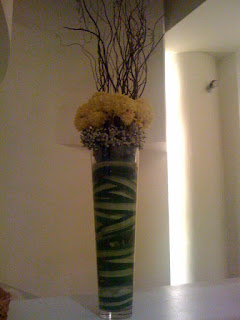 the parking garage was brightly decorated. 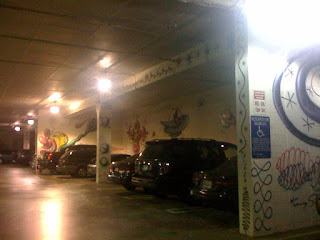 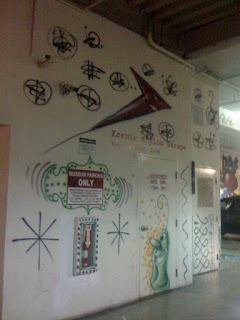 it was another easy walk over to the pacific asia museum. again, i'd never been here, but knew of the place as a popular wedding venue. as we walked into the courtyard, i could easily envision a beautifully laid out cocktail hour here. 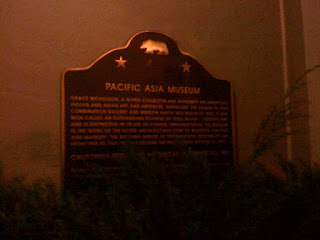 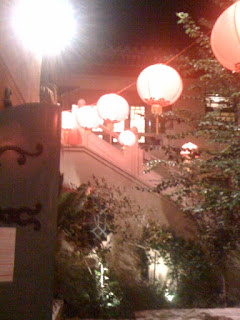 with a little time left, the group decided to head over to the pasadena civic center to see if we could catch the pasadena symphony's performance. as we approached the building (which always makes me think of past seasons of american idol, which filmed part of the audition process here), we were all rather taken aback at the sight of this dude, dressed as santa and handing out candy canes. 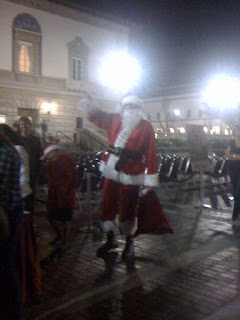 amber and i paused to peruse this list of upcoming speakers, which included ex-president clinton, condi rice, and the author of a book i'd just recently finished and discussed with amber - jeannette walls. if you haven't had the chance to read the glass castle, and you don't mind being unfathomably pissed off and angry at a pair of characters in a book (incredibly, a true story) - pick it up. it's an easy read, sucks you in instantly, and makes you really appreciate your own childhood. i don't know about most of you, but as crazy as my life has been, nothing matches this story. 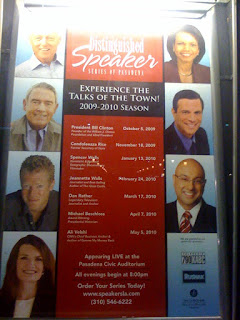 while we'd missed the symphony, inside the civic center was this dude, who shared the history of the instrument he was about to play. the 10-year-old inside of me was giggling and muttering things like "wow, he's got a big organ" and "heeey, is that an organ, or are you just happy to see me?" yeah. sorry, amber. 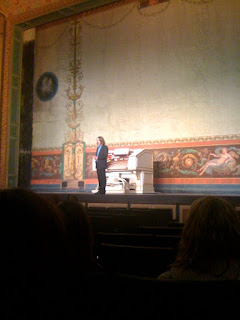 despite my juvenile humor, it was a really lovely instrument to listen to, and we all marveled at the skill it took to play. there were about a bajillion buttons and levers on that thing, and i know there's no way i'd have the patience to learn how to work it.

then it was a quick walk back to HQ, an equally short drive back to the 'bucks to drop amber off at her car, and the evening came to an end.

Email ThisBlogThis!Share to TwitterShare to FacebookShare to Pinterest
Labels: junior league, wan is a child