twitter has brought me all sorts of fun stuff, from free ice cream to alerts on what the jonas brothers are up to, and lots and lots of fabulous bacon goodies. while i wasn't in the mood to make this version of bacon caramels, i was drooling at the link to homemade sea salt caramels. and knowing i was going to see some friends who might also be appreciative of the effort, i gathered together the ingredients to tackle the recipe and make a batch. 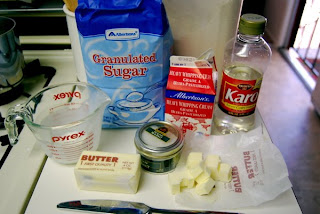 it was slightly different from the bacon caramels recipe i'm used to, but not too much so. it called for the ingredients to be boiled together, but in batches. 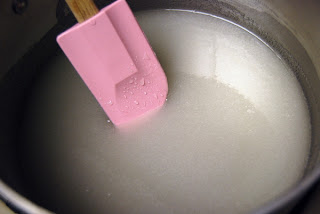 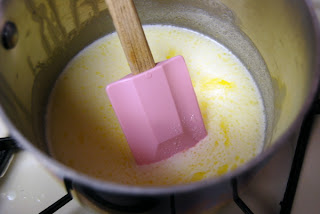 here's where that trip to the cake/candy supply store came in - instead of pouring the finished caramel into a pan and struggling a couple of hours later to cut them into bite-sized pieces, i had these handy dandy molds to pour it into instead. i coated them with a little non-stick spray and hoped for the best. 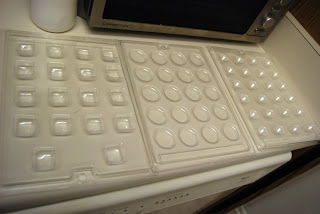 and while i was at it, i'd picked up some candy wrappers in pretty, girly colors. 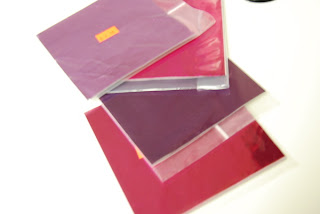 meanwhile, my mixture was merrily bubbling along after i'd combined the two pots of simple sugar syrup and heated cream, and the mercury was slowly but surely rising on my trusty candy thermometer. 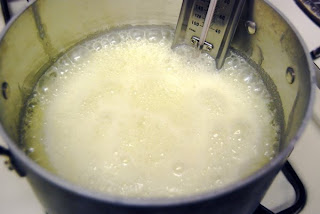 since i wasn't supposed to stir the concoction but needed to keep a close eye on the temperature, i stood at the stove and did a little reading. i was so stoked to have finally gotten ahold of a copy of catching fire from the library, after being on the "hold" list for weeks and weeks. i just hoped that i wouldn't get so involved in the story that it didn't literally "catch fire" from the flame on the stove. heh. 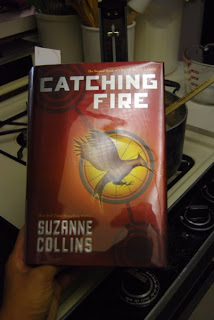 it seemed to take quite a long time to get to the right temperature -much longer than the 15 minutes the recipe stated. so i decided to do the "candymaker's tip" and dropped a bit of the goo into a cup of cold water to test for firmness. i couldn't take a picture of this process, but it worked - the little ball of caramel gooped together quickly, and when i pulled it out to check the texture and popped it into my mouth, it was just the right amount of chewy. and, oh, it was really yummy. the perfect level of sweet and salty, plus that rich buttery flavor. mmmm. 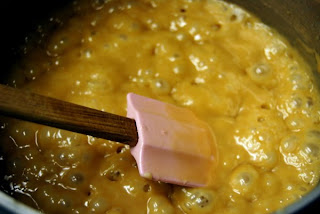 i emptied the pan into my pyrex measuring cup, thinking that the spout would make it easier to pour into the molds. 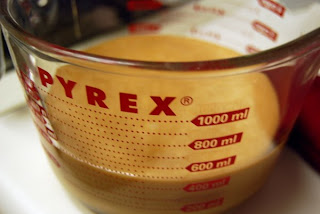 these molds are meant for creating chocolate treats, using colorful candy melts. i'd asked the lady at the store if they were suitable for the high temperature of homemade caramel, but as she wasn't sure, she told me to test it first. so after i tried pouring out one caramel and found that the plastic wasn't melting from the heat, i just went ahead and kept going. but it was cooling quicker than i expected, and by the time i started pouring into the "kiss" molds, it was thickening up considerably. oh, well. i gave up and just scraped the rest into one of my little round baking pans instead. 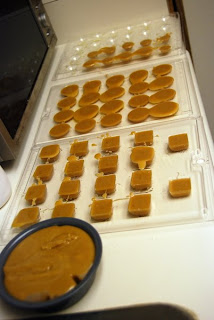 ah, such a pretty golden color. 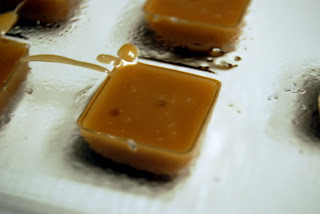 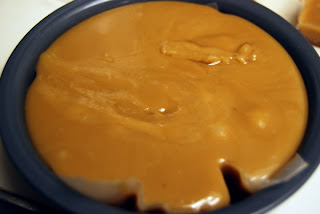 i'd lined that little round pan with a piece of wax paper i'd found in my haste to get the caramel poured out of the measuring cup, thinking it would be easy to peel off when it had cooled and set.

um, wrong. i popped the candy out of that thing and found that it was stuck for good. shit. so i ended up chopping a bit off of the bottom and all the way around the edges before cutting the rest of it into bite-sized pieces. luckily, i have some really good, sharp knives that made it fairly easy to do. 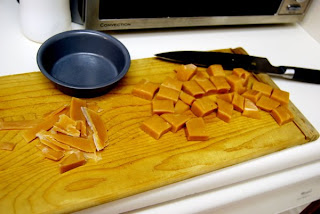 popping the candy out of the molds was much easier than i'd expected. good ol' pam came through for me in a big way. i gathered them all up and then wrapped them individually in the colorful foil squares. 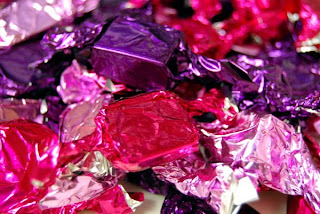 i put handfuls of wrapped caramels into clear plastic goody bags and tied them off with a piece of purple ribbon, but i forgot/was too tired/too lame to take a picture of the finished bags. oh, well. i'm sure you can imagine what they looked like.