since the vegas bachelor/ette weekend didn't end up happening, we ended up planning a local GTG to celebrate the bridal couple's upcoming nuptials. and on saturday, after dropping the hub off at an unspecified location and making a few wrong turns despite my google maps app on the iPhone, i finally pulled up to the valet.

we'd chosen to dine at real food daily, a vegan restaurant, in honor of the bride and a couple of other attendees, and my carnivore ass was admittedly intrigued and slightly wary. but i'm game to try new shit, and after perusing the online menu, even had a good idea of what i wanted to order. 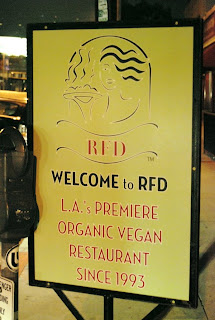 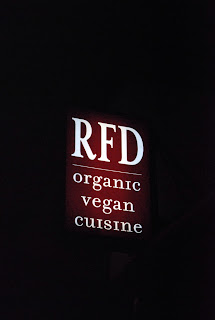 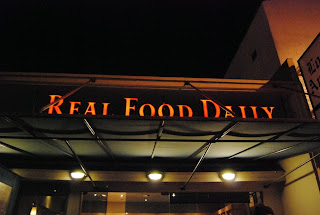 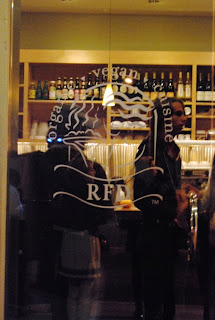 those wrong turns had made me about 15 minutes late, but as the small-ish restaurant doesn't take reservations, our party hadn't yet been seated anyway. while we waited and chatted, i looked around a little. 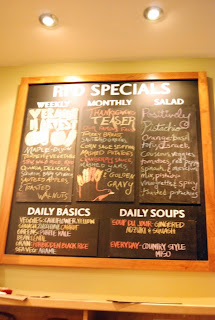 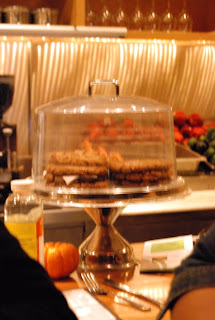 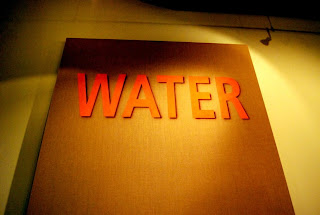 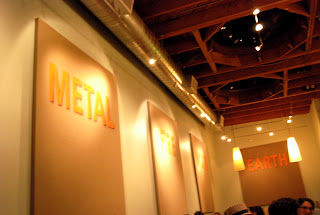 because we were a slightly larger group than most, we ended up waiting a total of nearly an hour. the hostess was quite apologetic, and the others commented that they'd never waited for a table before, even on a saturday night. and when our table finally opened up, we plopped down onto our seats gratefully and perused the menu. 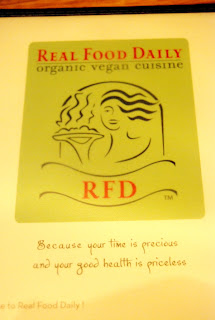 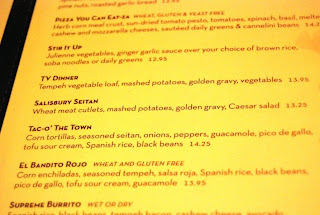 i didn't waver from what i'd chosen online - the "salisbury seitan." yelp reviews were quite informative, and a lot of folks raved about this particular entree. good 'nuff for me. i put my menu down and checked out their thanksgiving promo - i thought it was kind of pricey, but i can only imagine that a good vegan meal for turkey day is rather hard to come by. 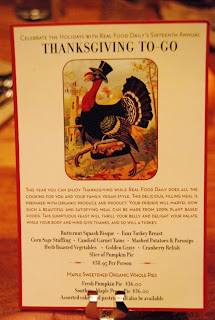 we'd decided to share a plate of the "not-chos," tortilla chips topped with cashew-based cheese, tofu sour cream, pico de gallo, black beans, guacamole, and cubes of some kind of meat replacement. i'd read raves (which were echoed around the table as we waited for them) about these, and i was pleasantly surprised that they were quite well-deserved. aside from the funky texture of the "meat," they were pretty damn tasty and even the most discerning palate would enjoy them, i think. 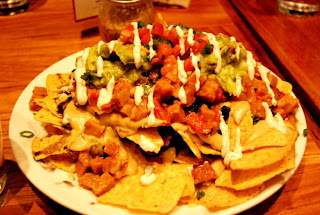 our entrees arrived pretty quickly. most had opted for the enchiladas, but i didn't get to take pictures of them. they looked pretty authentic, though, and the ladies really enjoyed them.


my salisbury "steak" was served with mashed potatoes and gravy and "caesar" salad. i took a deep breath, dug in, and found that it wasn't bad. again, the "meat"had a super weird texture and could've used a few shakes of seasoning, but the gravy was pretty good. i wondered what was in it, because i've never had meatless gravy before. the "caesar" was okay too - a little off, but not off-ful. heh. 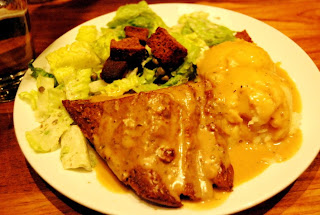 i'd seen tempeh bacon on the menu, and it was a foregone conclusion - y'all know i had to give it a shot. we were brought a whole plate of the stuff, and as we sampled it, we all agreed that it was...odd. it had a bizarre "smoky" flavor, and it was crunchy. i called it a "bacon-esque" cracker. 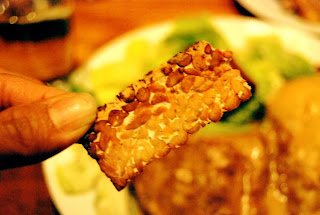 i managed to mow through more than half of my plate before i gave up. i was amply full, and i wanted to try out some dessert. we'd seen a server assembling a brownie bowl as we waited for our table, and my research had also turned up high praise for the chocolate pudding. so we did what any group of red-blooded women would do - we ordered them both. 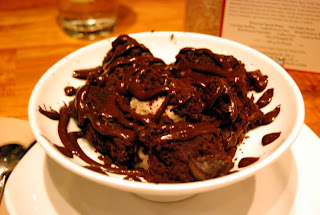 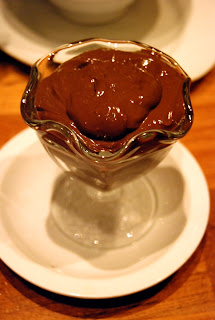 i didn't love the brownies, served with some kind of vegan ice cream, but that pudding was pretty awesome. it tasted just like a bowl of regular ol' jello pudding, and i found myself dipping my spoon into the cup again and again until it was all gone.

in any case, i was sufficiently sated, and my original plan to order a salad or appetizer here and then order food at our next stop was scrapped. i kind of don't really get the meat substitute thing - why look to replace something that you're morally against? - but i would think that salads and pasta get pretty old after a while. and hey, to each her own, right? the meal seemed to have cost quite a pretty penny, but that kind of creativity comes at a premium. it'd been a fun dinner, in any case, and i was happy to have tried something new.


outside, i coughed up the $4.50 for the valet, and was a little put off when the dude just handed me my keys and pointed to my car, parked on the curb just a few feet ahead of us. awesome. 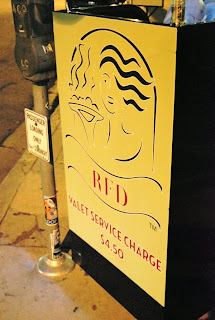 as i strolled to my car, i saw this and got excited until i realized that it was just the "pantry," an overflow pick-up location for sprinkles cupcakes. 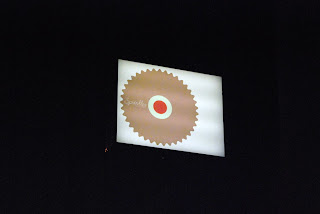 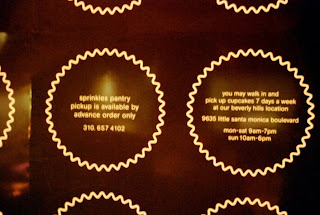 as i made my way towards koreatown and our next stop, i passed these places (which have nothing to do with each other and are pretty random for me to have snapped, i know). 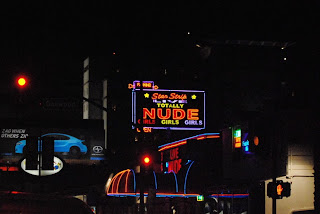 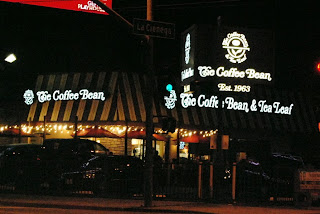 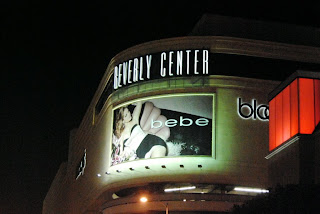 we had a 9:00 reservation for a private karaoke room at orchid, and the plan was for the boys to join us there later in the evening - after their own activities. we checked in, got settled in our room, and giggled as we perused the big books of songs. 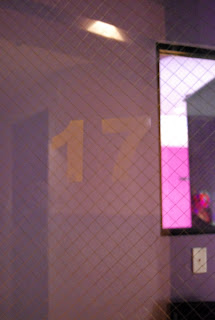 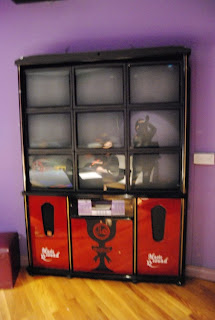 i eyed the menu wistfully, as i knew that the food there was really yummy, but i was stuffed. next time. 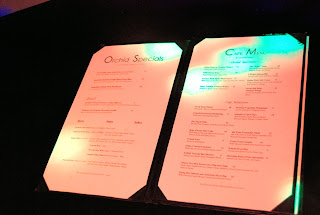 i had to take this, in honor of previous karaokefests i've attended here. "engaged at orchid!" hee. 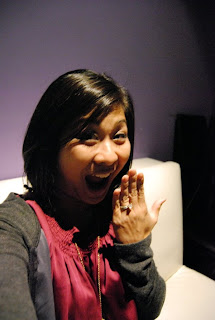 being normally very reluctant to take the mic and warble along with my awful singing voice amplified, i surprised even myself as i grabbed it early on and sang with gusto. i'd taken over programming song after song into the machine, taking my cues from suggestions tossed out by the girls, and had a great freaking time.

at one point, we discovered that trishelle from "the real world: las vegas" was in the room next to us. yay for M-list celeb sighting! that was the only season of TRW that i'd ever gotten into, so i was amused. and a little later, we all cracked up as a bunch of girls from that room stumbled in the door, mistaking it for their own. all but one of them scrambled out, leaving one of their friends behind. we hooted and hollered, cheering her on, and she declared "i love y'all, and they're assholes." haha! we talked her into staying to sing a song with us (it didn't take much convincing, really), and we laughed our asses off as she totally got into it and sang her little heart out. 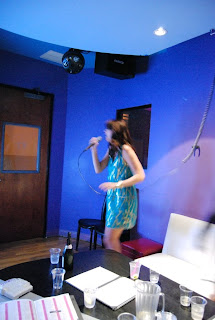 the boys arrived as we were belting out boyzIImen's "i'll make love to you," and they laughed at us as we continued to sing, theatrically throwing our arms out and having a great time.

we stayed for a little longer before the hub murmured "we'd better go," somewhere around midnight. the ILs were with the bean and we wanted to get back and relieve them as we'd been gone for quite a long time. we got home fairly quickly, and collapsed into bed, exhausted after our long day.

i found out the next morning that the girl who'd joined our party had returned right after we left, wanting to sing another song and eventually bringing trishelle in with her. they cleared off the table to perform on top of it, flashing everyone in the room as they clambered up in their short skirts. and she was also somewhat of an M-list celeb herself, as a previous contestant on "america's next top model."

Email ThisBlogThis!Share to TwitterShare to FacebookShare to Pinterest
Labels: partying with "celebs", wan is a carnivore