the end of final jam(z)

the bean had one final cheer practice at a local high school on thursday evening before the last competition of the season.  i really meant to take pictures in their regular gym since it's the last time they'd be practicing there, but i forgot and ended up with just this one.  oh well. 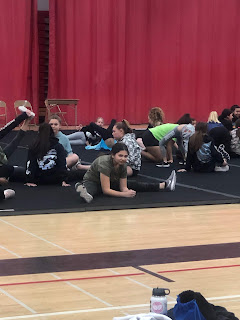 we headed out to bakersfield on friday afternoon, getting a little later start than we'd anticipated but still managing to avoid a ton of traffic.  it was a pretty uneventful drive, and when we arrived we decided to hit up the local california pizza kitchen for some dinner.  i only took this picture because i was so amused that the bean was shaking pepper onto her mac & cheese - which is something she'd never done before.  maybe we'll break her of the "it's too spicy!" mindset after all. 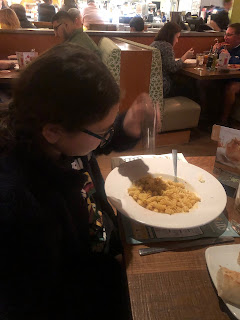 we were originally booked at a best western across the street from the convention center, because the marriott we stayed at last time was sold out.  i had a little PTSD from the last time we'd been there - remember how sick the hub and i both got and ended up missing the entire competition?  but i knew it was the most convenient place to stay and kept checking for cancellations in the weeks leading up to the competition.  on tuesday i somehow got lucky and found an available room that worked perfectly for us.  yay!

with a nice late call time of 10:45, all three of us slept in the next morning and even had time to order some room service breakfast. 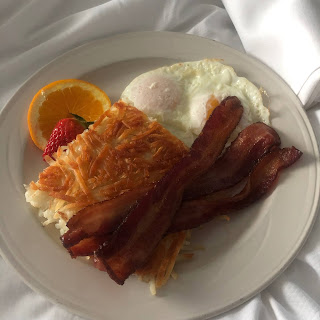 i got the bean ready and took her downstairs to meet her team while the hub packed all of our stuff in the car, and then we found a couple of great seats in the arena just a couple of rows from the stage.  i had my lucky shoes on again: 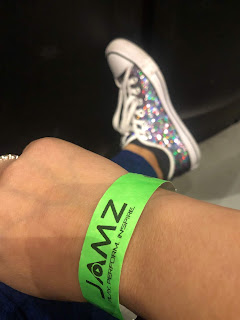 and then it was time for her first team to go up.  when they appeared off to one side of the mats i scampered down into the pit area along with the rest of the parents to take pictures and video and cheer them on.  i, of course, had managed to catch a cold which kind of killed my voice, but i yelled as loud as my sore throat would let me. 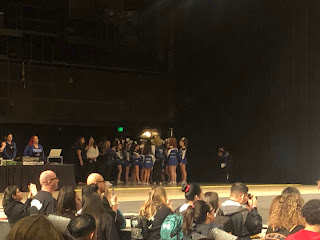 they'd been struggling a little with hitting their stunts during practice, but i knew this was how they operated.  they always get all the jitters out in the days before competition and during pre-performance warmups, and then when they hit that mat with the judges and a supportive audience in front of them they nail it.  today was no exception, and we all screamed our heads off as they hit every stunt, pyramid and dance sequence.  so proud. 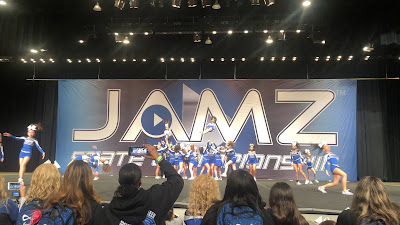 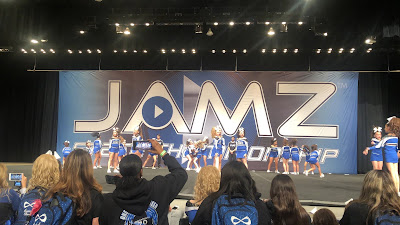 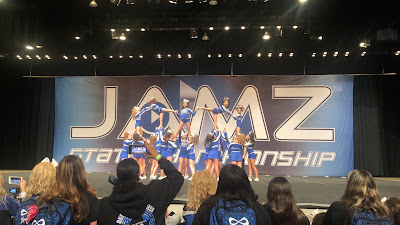 there was an hour between her two teams, and after a quick shoe change and a few minutes of sitting with her team the bean was up again to warm up with her second team backstage.  and then it was time.  this is the team that she performs a good chunk of the dance sequence front and center, and i knew she was nervous but excited to get it done. 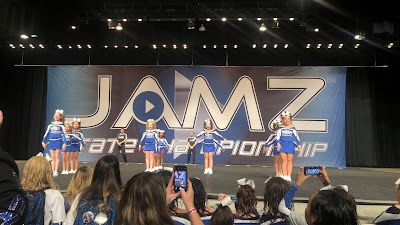 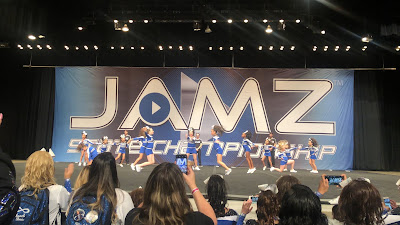 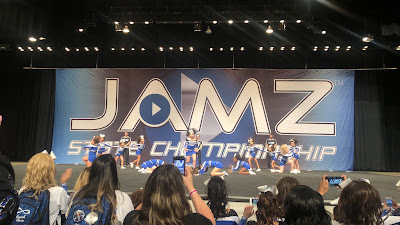 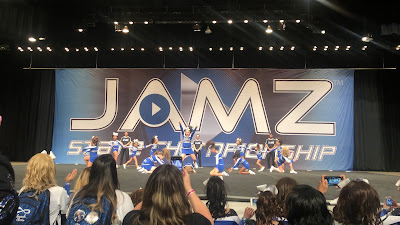 this team nailed their routine too, with every stunt and jump and pyramid done to perfection.  we were all super proud and excited to see if they placed, and headed over into the marriott's ballroom for their awards ceremony.  jamz had decided to do "rolling awards ceremonies" for this competition, which actually made things easier for everyone. 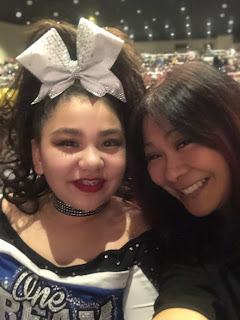 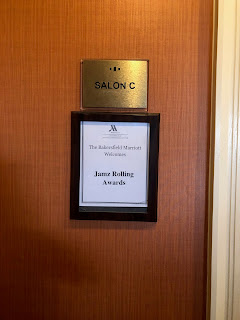 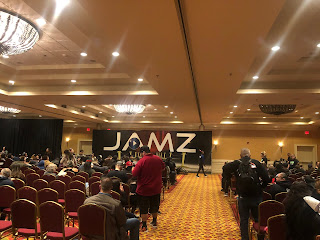 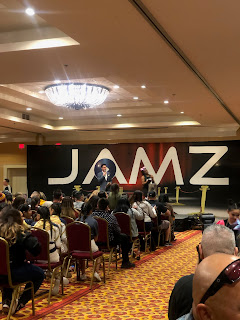 when our division was called, we all waited breathlessly as the announcer started with the third place team.  and then when he called out the runner-up and it wasn't us...well, we lost our minds and jumped and screamed and cheered because that meant we'd taken the state championship.  this was the one competition that the bean didn't attend last year, and they didn't win - but this year they took home rings. 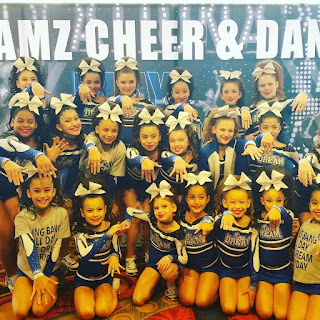 but wait - here's the funny part.  her second team wasn't scheduled to have their awards announced until the next ceremony, but somehow they must have decided to bump it up and none of us knew.  and so while this team was out in the lobby receiving their rings, taking pictures and celebrating, the announcer called out team trust as champions - and no one was there to accept.  the hub and a couple of the other dads came out and told everyone, but i think we were all so elated and distracted to understand fully what they were telling us.  hahaha!  and so by the time we got ourselves together and went back inside, the room was pretty much emptied out.  and some of the girls weren't even present yet, still sitting in the arena next door.  d-oh!  and so this picture is missing a few team members. 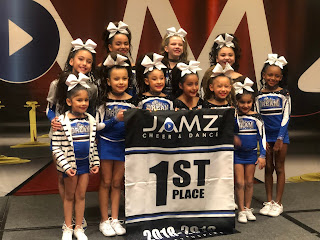 the bean went back to the table to pick up her second ring: 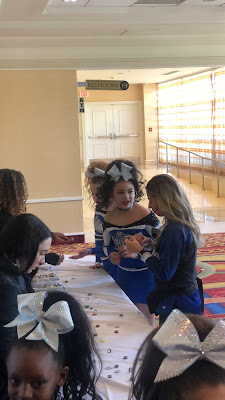 and then put them both on for me.  bling bling! 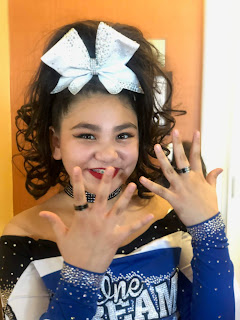 we returned to the arena to wait for our last team to perform and then for the final awards ceremonies to start.  things were delayed when not just one but two teams had girls who were either really anxious or sick and barfed onstage...how'd you like THIS job, eh?  ick. 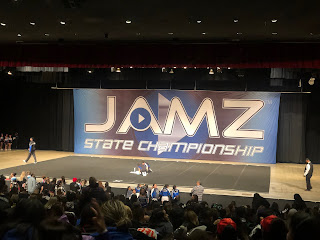 our last team placed in the top 3, and we stayed long enough to see which team won the grand champions award. 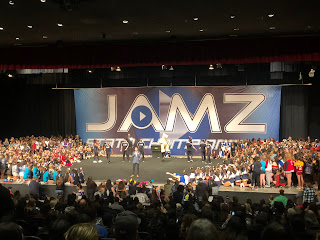 this is the only family photo i got...it's terrible, but i guess it's better than none. 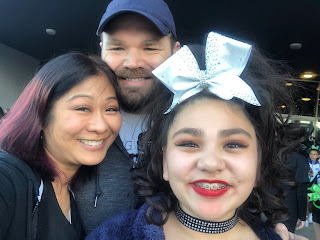 and on the way home, after taking down her bow and her hairpiece and removing her makeup for the very last time for season 2, we stopped in pasadena and had some sushi for dinner. 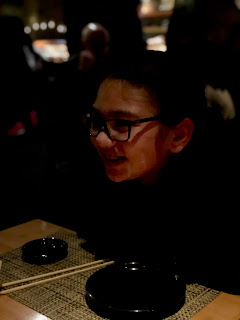 she's doing a lot of waffling back and forth about returning for next season, but i know her.  just like last year, they're all on a high from winning state and national championships and it'll happen...we'll be back.  she likely won't want to cross-compete again, but she'll perform with at least one team.  mark my words.
at February 11, 2019