caught up in a new coffee craze

okay, so we all know how much i love a good trendy thing, yes?  especially these days, when we're all turning to all the various forms of social media in an effort to still feel in touch with our friends and family.  i'm going to go ahead and admit, though, that being in quarantine mode really isn't all that bad for me.  as the old lady puts it, this isn't that far off from my normal day-to-day life - with the exception of everyone being home all day right along with me.  the bean is really self-sufficient, with distance learning sessions most weekdays from 8 till noon.  and then when she's not in class she's working on homework or the book report that she's doing an animated movie for.  and the major introvert in me is extra stoked to have an excuse to stay home.  and not being under pressure to adhere to a particular schedule is pretty nice.  AND the sweatpants/leggings/comfort bra uniform is amazing.  heh.

anyway...i'd been seeing pictures everywhere of something called "dalgona coffee."  basically, it's a cold, creamy whipped coffee drink made with just three ingredients, plus ice cold milk.  i hit up the google for recipes, and they were all pretty much the same - two tablespoons each of instant coffee granules (i know, i know), regular ol' sugar and boiling water.  you put it into a mixing bowl and hit it with a whisk or a hand mixer for anywhere from 5-20 minutes (depending on your weapon of choice) until it's thick and creamy.  then you pour yourself a nice cold glass of milk - 6-8 ounces - and then top it with the whipped coffee mixture.  easy peasy.

unless, of course, your entire house is packed up in the garage and you can't figure out where anything is without having to move a bazillion boxes around.  which, of course, is my current situation.  but i really wanted to try this thing, so when the hub headed out one day to stock up at the grocery store, i asked him to grab the instant coffee for me.  he did look at me sideways, and i did have to pull up a picture of what i needed so that he would know what to look for.  anyway, when he got back the old lady and i went into the garage where we have a handful of kitchen items set up on the workbench next to where we plugged in the fridge and got to work.

i didn't have a mixing bowl to use, but i did find this hello kitty oversized latte mug that i figured would work perfectly.  and because we both wanted to try the coffee i doubled the recipe and placed the dry ingredients into the mug. 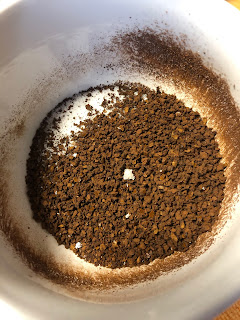 probably five years ago, the old lady and i had gotten suckered into buying some sort of magical whisk at the l.a. county fair.  the chick doing the demonstration had taken a cup of milk, whipped it up with this thing for about a minute and produced whipped cream thick enough to serve on top of a cup of hot chocolate.  i knew exactly which box it was in, and so that's what i used to make my whipped coffee. 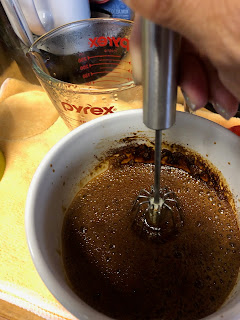 except that after about 7 minutes, the mixture still wasn't thick OR creamy.  it was supposed to be the color of peanut butter, and mine was still as dark as it was when we started.  we took turns with the whisk, but by about the third switch i was over it.  i'd spied a box marked "small kitchen appliances" and hoped that my mixer was inside.

however...i did find my immersion stick blender.  i figured it was worth a shot, and so i pulled it out and plugged it in and hit the coffee mixture with it.  it took a few more minutes, but finally it was done. 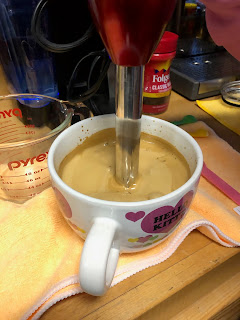 i poured the milk into my one good glass - because you know it doesn't count if it's not pretty enough to post on the 'gram: 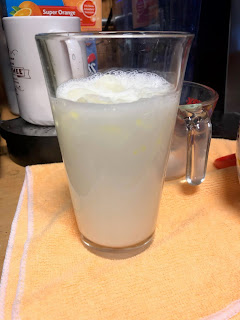 and then i found one of my pink plastic yogurtland spoons to carefully place dollops of the whipped coffee on top. 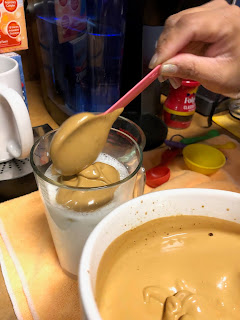 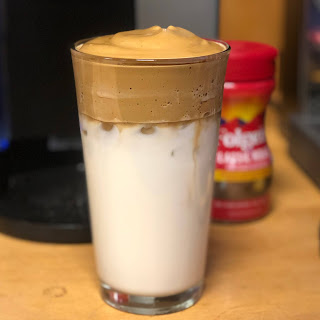 we used a red solo cup for the old lady's drink and stirred it all together once the photos were taken.  and we were so excited to find that it was really delicious - not too sweet, not too strong...just right.  and a whole lot cheaper than hitting the starbucks drive thru, that's for sure.

have you seen dalgona coffee on your timelines?  are you gonna try it?  because let me tell you...it's really tasty.  totally worth the elbow grease.  mmmmm...
at April 03, 2020

Email ThisBlogThis!Share to TwitterShare to FacebookShare to Pinterest
Labels: coffee is good, quarantine