have yarn, will travel

now that the mask making seems to be pretty much behind me, i've turned to something else as a new creative outlet.  granted, it's not as though i have any shortage of things i want to sew up - i've got tubs of fabric and a whole list of patterns i'm dying to make.  but with all of this time on my hands these days, i decided that i'm going to tackle what i've called "the final frontier" (at least, for me):  knitting and/or crocheting.  oh, yes. 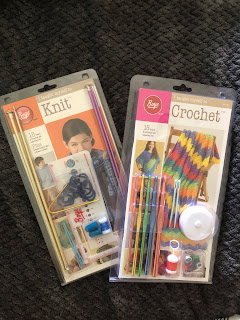 the old lady learned how to knit a long time ago, so she was happy to add on a few supplies to my joann's order.  it's something i've tried and failed at a good number of times in the past, but this time i'm bound and determined to make it happen.  plus, i've always thought it was really cool to have a hobby that's portable - so i could take it on road trips and plane rides and things like that.  you know, if the world ever goes back to normal and we can travel again.

and so after i divvied up the yarn and needles i ordered and gave the old lady her half to take home and work on, i sat down and pulled out that crochet lesson book.  i figured that maybe since crocheting uses a hook instead of two separate needles, it might be easier to start with.

that book, by the way, was useless to me.  i tried to read through their instructions and scrutinized the step-by-step photos and they just weren't doing anything for me.  and so i pulled out the laptop and searched youtube for some tutorials for super duper beginners, and after i found one that explained things a lot clearer to me i picked up the hook and the yarn again and managed to eke this out: 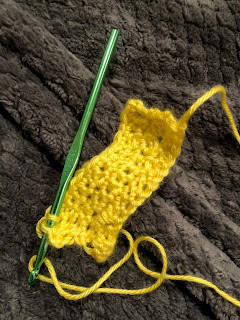 i was SO proud of myself.  heh.  the bean said that it was perfect for wiping sweat off my face.  hahahaha!  she's not wrong, i guess.  but i found crocheting to be somewhat painstaking, which is most likely because of my super duper beginner status.  i'm pretty sure i just need to practice more, which totally makes sense and goes along with the advice i'm always doling out to the bean when she gets frustrated with something new.

still, the next day i pulled out the knitting needles and the bulky yarn i'd picked out and hit up the ol' youtube again for another lesson.  and somehow, even though i'd been intimidated by the use of two needles and haunted by the memories of my past failure, i found myself casting on in no time and knitting my first few rows of stitches! 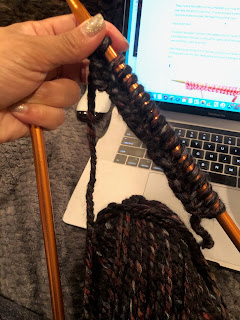 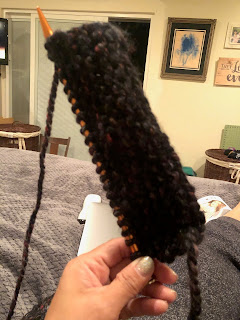 this was super encouraging, not to mention i was enjoying the process and watching the rows grow as i kept on practicing.  i learned how to do a purl stitch and what a stockinette stitch is, and looked at a beginner's pattern and researched all of the terms that i didn't understand (which was a lot).  as i continued on though, i found lots of mistakes and dropped stitches and holes and all sorts of other weird looking pieces.  and so i decided that it would probably be a good idea to just pull the needles out, rip it all apart and roll the yarn back up to try again. 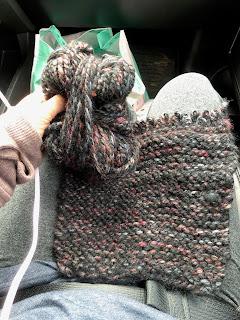 of course, while i was waiting for my joann's online order to arrive i'd been looking at all sorts of other websites with complete kits for knitters from super beginner to expert levels.  and because i was a first time shopper, i was getting access to some pretty good coupon codes to use.  as i was learning how to do those first few stitches i received my order from lion brand yarns - a beginner-level pattern for a slouchy cardigan that included six skeins of yarn, a circular knitting needle, stitch markers and a set of tapestry needles for sewing the seams together once the fabric was knitted. 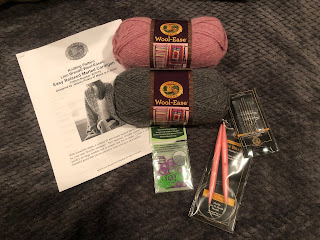 i spent a little time reading over the pattern and was pleasantly surprised to find that i'd already learned the skills that were required for this project.  and since i'd taken apart my practice swatch, i felt like maybe i was ready to tackle this one...now.  i pulled out that circular needle, removed the packaging from the skeins of yarn and got to work with the first step - using both colors to cast on over a hundred stitches. 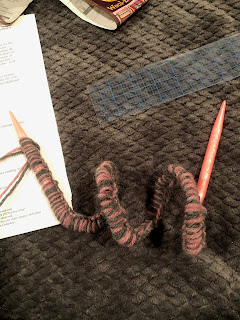 i'm about seven rows into the ribbing portion of the cardigan and i'm super excited to keep on knitting and see how this thing turns out!  in between knitting sessions i'm browsing through even more knitting supply sites, finding all sorts of great quality needles and accessories and one website that features soft leather bags that are made for toting your projects around.