the bean has a good number of friends who also have october birthdays.  in fact, two of her most cherished BFFs actually share a birthday, and they often celebrate together.  this year was different though, as it is for most other folks.  i'd suggested that we do a quick, properly socially distanced cake & ice cream gathering on one of their driveways, but we couldn't get our schedules synced up to make it happen.  this is where i also mention that both families are in the medical industry and are two of my most trusted friends, so i knew they were being cautious throughout this whole pandemic.  both girls had attended the bean's birthday car parade, and her friend soccer thought it was so much fun that she asked her mom to organize one for her too.

her other buddy, brainiac, lives a little further away from the rest of us.  it would've been a little harder to get a bunch of their friends to head out for a parade, so the bean and i decided we'd just go over and surprise her with some balloons and presents after school on her actual birthday. brainiac's family is a bit more cautious, and so when we arrived we made sure to keep a good distance and placed the goodies on their porch.  i did manage to capture at least one photo to commemorate the occasion, though: 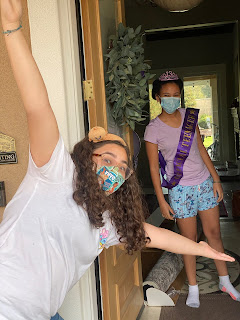 later that evening, we joined soccer and her family for birthday dinner out on the patio at cheesecake factory. 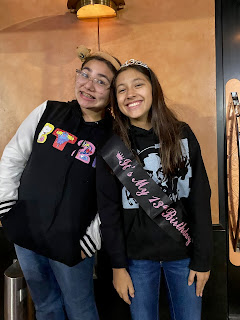 unlike the bean and me, soccer doesn't have a huge sweet tooth and isn't a chocolate fan at all.  sadly for her (but lucky for us), the only cake her dad was able to procure for her that morning was a chocolate one. and so when i got up the next morning - with her birthday parade scheduled for that afternoon - i decided to bust out a couple of old tried-and-true recipes, for a simple white cake with seven-minute frosting.  and because i like to make things more complicated than they need to be, i decided to try "tie-dying" the cake batter.  i divided it into four bowls and picked out some fun colors: 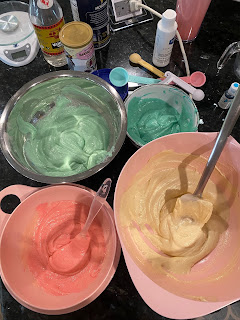 but i got distracted after spooning the colored batter into the prepared pans and forgot to swirl the colors together to create the tie-dye effect.  oops.  still, the layers were fun and colorful. 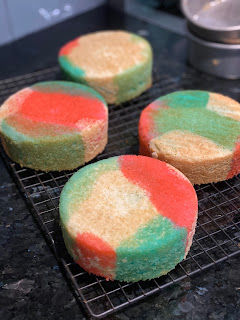 i mixed up that seven-minute frosting, and must have done something wrong because after five whole minutes of whipping it wasn't as light and fluffy as i remembered it being.  oh well.  i used it anyway, placing the first layer on the plate and topping it with a nice big dollop. 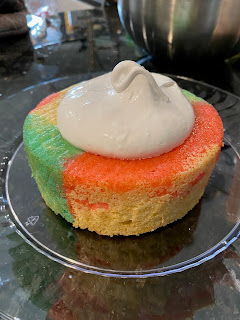 my original idea was to use all four layers, frosting just the top and leaving the sides bare.  except that as i continued to assemble it, i remembered that i suck at cake.  like, i always have these grand ideas but they never work out.  i really should just stick to cookies. 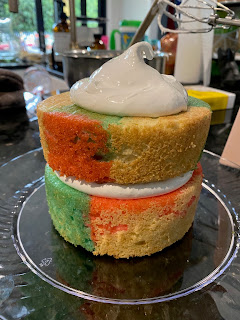 i got up to the third layer when things started to go sideways.  remembering the disaster that hit two years ago while making the bean's birthday cake, i pulled out some wooden skewers and placed them in the cake to keep the layers from sliding right off.  except that even with the reinforcement, i still had a leaning tower of cake happening.  and by then i was just kind over it and ended up frosting the whole damn thing after all.  i busted out some decorations from my arsenal of sprinkles and ended up with this: 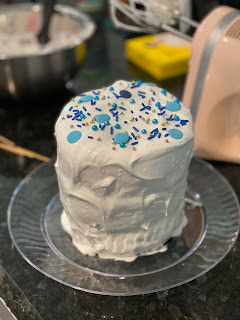 and since i was also unsuccessful with the bean's cake last week (sense a pattern here?  i definitely need to start learning from my mistakes), i had this fun topper that didn't end up going unused after all. 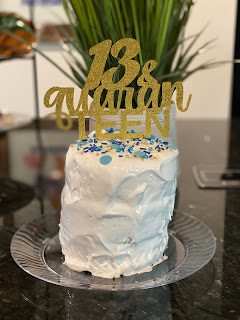 i got the hub to drive us to the parade so that i could hold the cake on the way there.  i wasn't at all sure that the bean would keep it steady (sorry, kid, it's true) and so i wanted to be the one to try and keep it as safe as possible.  shockingly, we got all the way there without incident and i happily handed it over to the birthday girl's mom for safekeeping. 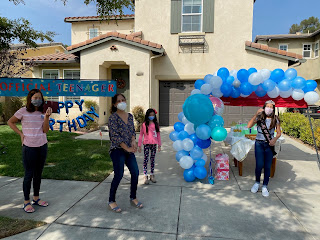 back at home, i'd used the leftover frosting to top the fourth layer of cake.  after we had dinner, i sliced it up and the bean and i got to have birthday cake after all. 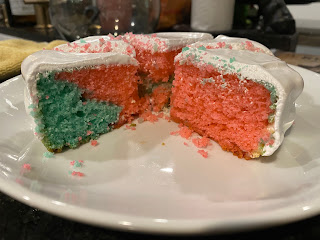