unbeknownst to the bean, i had one last birthday surprise up my sleeve.  acting on a suggestion from the old lady, i'd decided to organize a birthday parade for her on saturday afternoon.  i put the word out on facebook and reached out via text to as many of her friends' parents as i had contact information for and had hoped for the best.  i was just hoping that it wasn't so last-minute that turnout would be low, but as the responses started rolling in i started to feel a lot better about it.   the mini parade from her dance friends on her birthday had been a great surprise, and i knew she'd love seeing even more of her friends roll by to celebrate her entrance into the teenage years.

with the old lady's help, i managed to put together some goody bags for her to hand out to everyone who was able to come. i'd originally planned to make more of those "#quaranTEEN" cookies, but i knew it was going to be tricky trying to make several dozen of them without her noticing what i was working on.  i had a handful of them left from the first parade, and i decided to supplement the goody bags with another treat she adores - the mint chocolate meringue bites we've been making since her third birthday party.  i found one of the fonts used by her beloved BTS and used it to make little stickers for the goody bags, and here's what we ended up giving out: 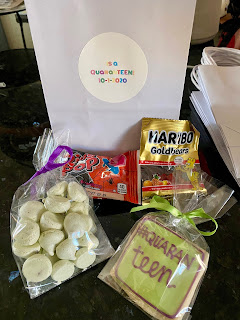 i don't know why, but i was really nervous as parade time got closer.  i'd sent out a map the day before to everyone who was coming, letting them know where to park and what time.  it was quite the work of art that i'd love to share here, but an't for obvious reasons.  i busted out some pretty amazing markup skills though, trust me.  they were to line up behind the old lady, who was going to be the lead car for the parade.  she sent me this picture around 11:45 to show me the sign she and her special friend had created to hang out the window as they drove past the house: 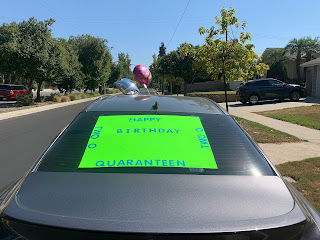 and just before go time one of my friends sent me this to show me the rather sizable lineup of cars waiting to come and shower the bean with birthday love.  i was pretty touched to see how many people had answered my call, and i knew she was gonna feel the love too. 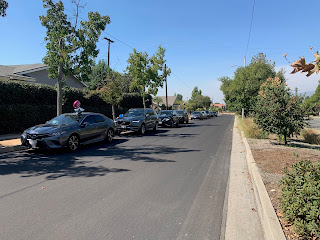 when the old lady sent me the text to say she was going to start driving, i grabbed the bean's tiara and sash and put it on her while the hub told her that her sister wanted to take a few pictures of her outside.  we went outside and i took this: 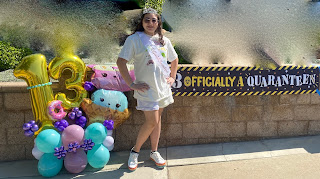 and i thought for sure she was going to figure it out as soon as she walked outside, but she tells me that it wasn't until after we snapped the photo and she turned around to go back into the house that the pieces fell into place for her.  when she caught a glimpse of the hub coming out with the goody bags, she finally realized what was happening and luckily didn't have much time to freak out or panic or anything before the parade began.  there was honking and cars all decked out with fun decorations and gifts and signs and quick glimpses of friends she misses hanging out with so much, and i could see the happiness on her face as she greeted everyone and handed out goody bags. 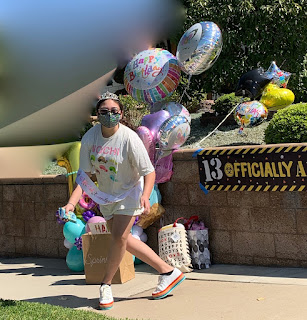 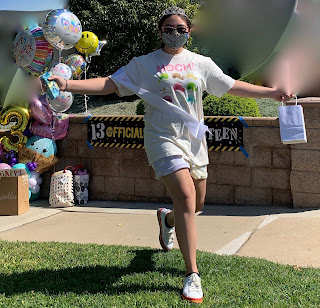 lilcee & co. drove up and had gifts and a box of delicious treats for all of us - these adorable masked cream puffs that tasted as good as they looked. 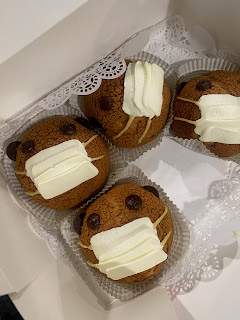 cousin seven and her special friend were in town that weekend and we were so happy that they were able to come to the parade.  while they were here for a more somber reason - her maternal grandmother passed away last month, and she was home for a prayer service with her parents - they rolled up with their rental car all decked out in BTS decorations, which they took off and gave to the bean for her room. 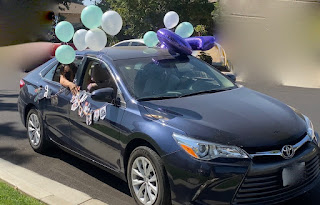 and my mom was able to come on her way to that same prayer service, bearing gifts along with jumbo packs of pocky and a cake that smelled delicious.  when we got it inside and opened it up, we were a little puzzled at the message on it but cut into it anyway. 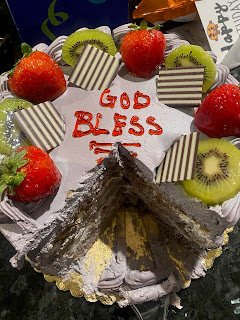 i still crack up when i imagine the scene at that prayer service when they went to serve their cake and found one with a birthday greeting on it.  being a rather somber occasion, i hoped that it added a little comic relief.

Email ThisBlogThis!Share to TwitterShare to FacebookShare to Pinterest
Labels: bean's a birthday princess too, quaranteen