so i still don't have a whole lot to talk about these days, really.  as i look through my camera roll, i just see a bunch of photos of random stuff that i don't even think i can cobble together into a decent non-rambling post.  ugh.  and it's so hard to believe that it's been a whole year now since the world went batshit crazy and lockdown began.  this time last year, we were getting ready to head to disney world for cheer competition...with no idea of what was coming our way.

but hey!  i've been knitting and crocheting, which is one of the best things to come out of quarantine for me.  this time last year, i had no interest in yarn and needles and crochet hooks.  and now i can't seem to get enough of it.  like, i learned that i could take a ball of fluffy velvety yarn like this: 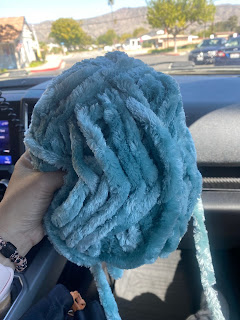 and turn a basic hair tie into a fun squishy scrunchie in less than ten minutes. 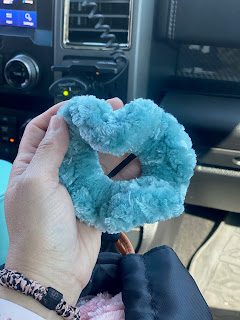 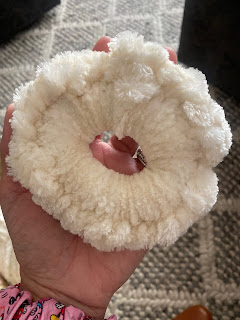 and this yarn - i've been hoarding it for a few months, waiting for the right time to start a beginner-level pattern for a pullover sweater.  i pored over the pattern, watching videos to learn how to do the parts i had never tried, and then finally during one of our road trips i decided to jump in and get started.  the yarn is so pretty - a fun pastel concoction appropriately named "yarnicorn." 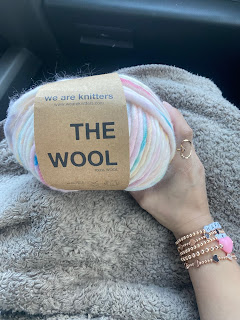 i was feeling really good about it and got pretty far.  i even breezed past the parts that i'd been so unsure about, and i thought i was doing a good job until i stopped to grab another ball of yarn - and then i turned it right side out to check it out and realized that i'd definitely done something wrong. 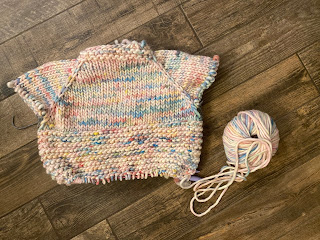 i figured out too late that i'd been doing the stitches on the body completely wrong.  and then i thought that maybe i could just pull those stitches out and pick up where the stitches were perfectly fine - but the neck had the same incorrect stitching.  in all honesty, it didn't look terrible and could probably have passed for an intentional design element.  but i knew i would never be satisfied if i didn't just suck it up and start over.  sigh.
working on it the second time around went a lot faster since i knew what to expect.  and i was determined to get it done and do it right.  so in about a day's time i managed to get caught back up and even finished one of the sleeves. 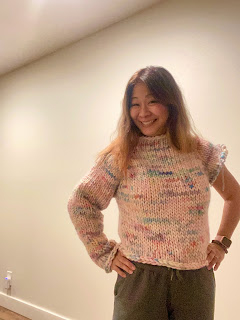 of course, every time i stopped to take a break one of the dogs would come over and make themselves comfy. 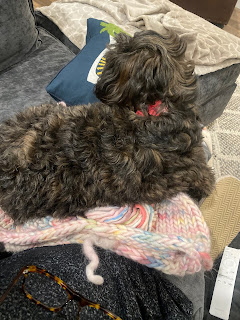 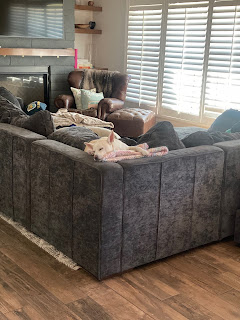 and when it was done, i completed the last step, another task i'd never done before:  blocking.  i used some rustproof pins and placed the sweater on a set of foam pads, stretching it slightly before spraying it with water.  this process is supposed to set the knit fabric into the finished size and even out the stitches. 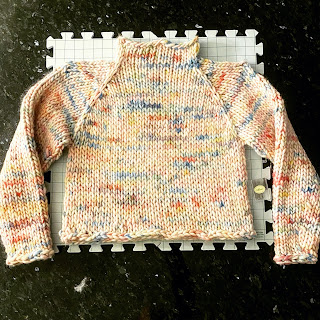 i still need to put it back on and take an "after" photo, but i'm pretty stinking proud of finishing my first pullover sweater and that it's actually something that i want to wear.  and the success of this project only makes me want to just keep on knitting.
OMG.  what a nerd.  if my march 2020 self could see me now...
at March 09, 2021