did we nail it?

remember when the bean and i did the nailed it at home challenge a few months ago?  well, they had a "to all the boys i've loved before" themed version, and this time the old lady joined me for the fun.  the now-familiar box arrived via fedex just a few days before: 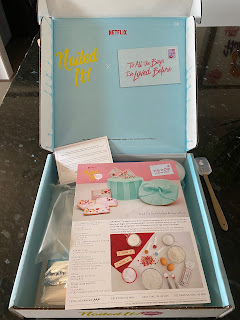 and just like last time, there were a few tasks to complete before the live portion on zoom began.  first up - bake the cake.  i dig this part because it's like having a sous chef who pre-measures everything for you so all you have to do is dump it all out and get to work.  i mean, it's not really hard or super time-consuming to measure ingredients out, but still...this is extra easy. 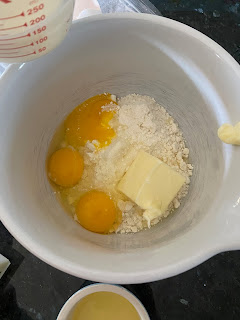 i got the cake in the oven and moved on to making the cookie dough.  i figured - well, sugar cookies, right?  easy.  i've done that a bazillion times.  except that the process as described in the recipe was different from how i do things.  still, i resisted the temptation to do things my way and followed the directions like a good girl.  the dough was a little dry and crumbly, but i wrapped it up and put it in the fridge as instructed. 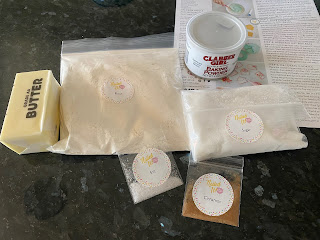 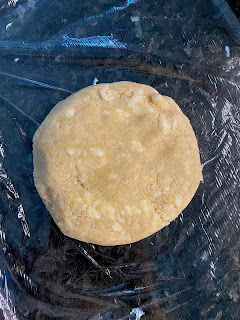 making the frosting came next.  this was a very simple buttercream that mixed up like a bag of cement, and i ended up adding a little extra milk to make it a little more spreadable. 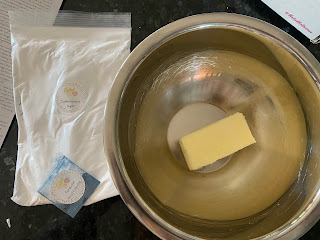 by then the cake had finished baking and cooling.  the last step required to be done before the virtual event was to cut it out into one 6" circle and four semi-circles, and i found that the piece from one of my small cake pans was perfectly sized. 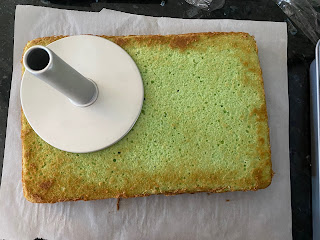 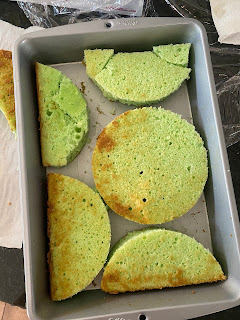 my reward?  snacking on the leftover cake scraps, which both of the girls enjoyed along with me. 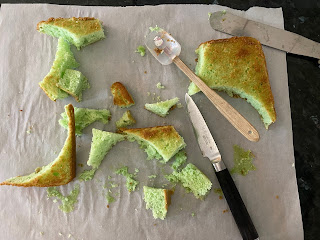 just before we joined the zoom call, we laid out all of the remaining items from the box. 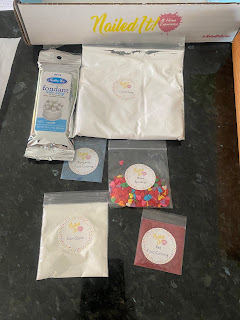 we were admitted into the virtual room right at noon, and just a few minutes later we were joined by chef jacques torres and anna cathcart, one of the cast members from the movie. 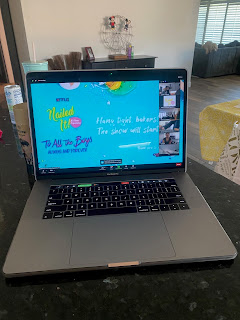 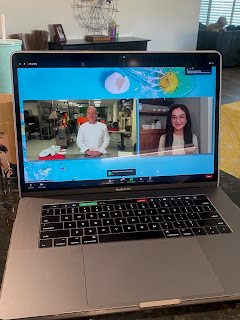 the first step was to get the cookies baked.  the old lady took on that task, rolling the chilled dough out between two sheets of parchment paper. 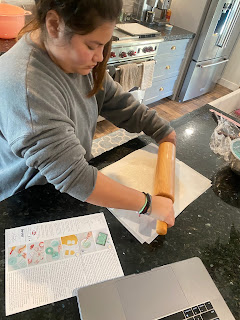 we don't have pictures of it, but trying to cut out the rectangles out of that dough was...challenging.  i was doing it freehand per the instructions, but that dough was super sticky and really hard to work with.  the pieces looked pretty sad, but we only had an hour to get everything done and so we just put them in the oven as soon as they were ready and hoped for the best.
next, i cut out a hole in the middle of the cake circle and then we stacked the rest of the pieces to give them the first frosting crumb coat. 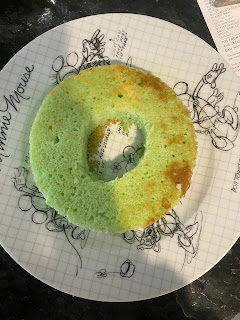 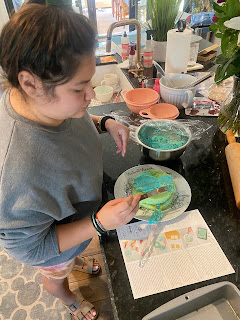 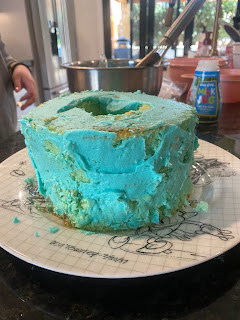 looks pretty sad, huh?  very worthy of the "nailed it" title.  i thinned the rest of the frosting out with a little more milk and busted out the offset spatula and it got a little better.  this is as good as it got. 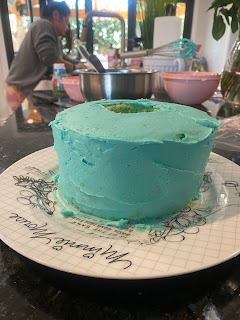 after the old lady finished tinting the fondant with the turquoise food coloring, she rolled it out and cut out the pieces we needed for decorating the "hatbox." 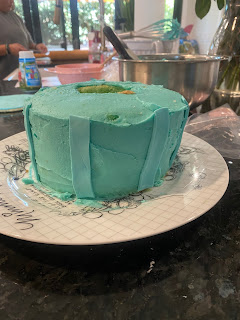 the rest of the hour went by in a blur.  the cookies, as predicted, were a hot mess when they came out of the oven.  the cookie icing was easy to mix up and tint, and while the finished product was definitely not up to my usual standards it was good enough.  we were joined by lana condor and jenny han, who also participated in the baking challenge and then "posed for selfies" when our time was up. 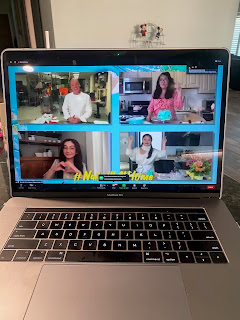 and then we closed it out with obviously pretaped segments from the show's hostess, nicole byer and a couple more "to all the boys" cast members. 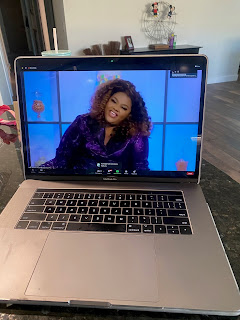 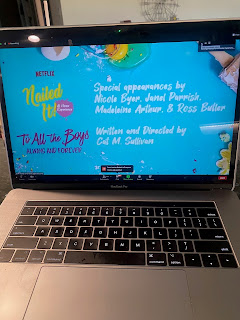 so this is what the completed hatbox cake was supposed to look like - which was obviously done by a full team of pros, and likely not completed in one hour like we were given (do i sound bitter? heh): 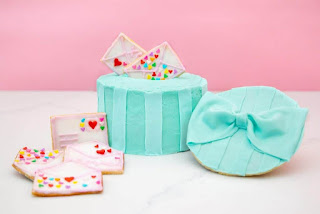 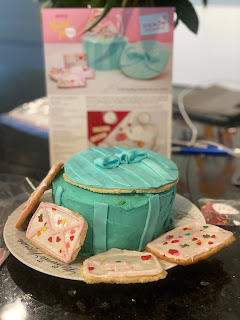 let me tell you...nothing humbles a confident baker like taking on a challenge like this.  i looked at that sample photo and was like, hell yeah i can do that!  that looks simple AF.  and if i were able to bust out my own personal arsenal of tools and recipes, i might be able to get it a lot closer.
then again, maybe not.  after all, it's been proven time and time again that cake decorating is NOT my forte.  ha!
at March 01, 2021

Email ThisBlogThis!Share to TwitterShare to FacebookShare to Pinterest
Labels: cake, nailed it