i swear i tried my hardest not to go all pinterest-y partyzilla on the bean's birthday party, even though this was the first time we'd be hosting it at the house since the ice cream party when she turned 5.  5!!

and i was mostly successful, really.  i admit that i peeked a couple of times looking for some fun decorating ideas to go with the narwhal theme that she'd picked out, but i didn't let myself get all crazy about it.  i think it also helped that there was so many other things going on in the house to prep for the onslaught of party guests.  we have new floors and new paint...i'll go into that in another post.

with the old lady doing a bunch of research for me, i ended up ordering a bunch of things from etsy and amazon that would add just the right amount of decor without going overboard like i tend to do.  and since the bean had asked if we could serve hawaiian bbq for lunch (which was also her choice last year), i knew i didn't have to do much in the way of food.

but i did want to have some cookies to go with our mini candy buffet/favors table.  i ordered a narwhal cookie cutter from etsy and did about 3 dozen of these: 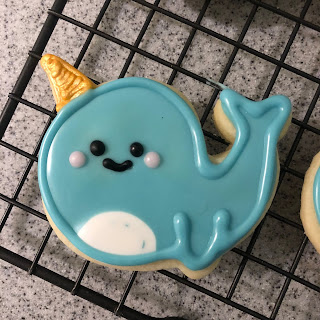 i also wanted to make her cake myself.  i'm really not that good at cake decorating, but i was confident enough in my baking skills that i felt like i'd be able to pull off a decent multilayer cake with fluffy seven-minute frosting, dousing the top with a fun sprinkle mix and the cake topper i'd ordered (also from etsy, of course).  and so the night before, i busted out my favorite simple white cake recipe and baked up four cake layers in the four different party colors: 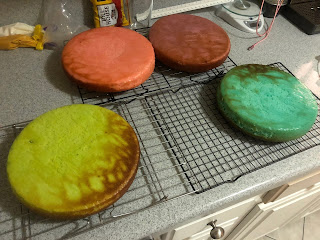 i placed them each into a ziploc bag after they'd cooled completely and then went to bed with an early alarm set so i could make the frosting and assemble the cake.

i woke up around 5 the next morning with one thought in my head:  what if the cake wasn't enough for the 20 kids who were coming, along with a handful of parents?  so i did what seemed to be the best thing:  i whipped up another batch of cake batter and made a dozen cupcakes.

while they cooled, i got to work on making the frosting.  seven-minute frosting is my most favorite because it's fluffy and delicious and tastes really good with pretty much any kind of cake.  the whole thing came together pretty easily, and i covered the top with the various types of sprinkles the old lady and i had picked out at the cake supply store along with the cake topper and a narwhal squishy we'd bought just for this purpose. 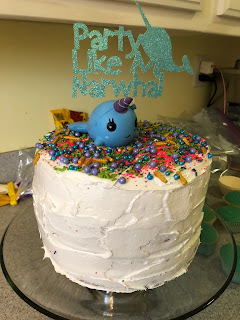 looking at it in that picture, i should've pretty much guessed what would happen next.  ugh.

the cupcakes got similar treatment: 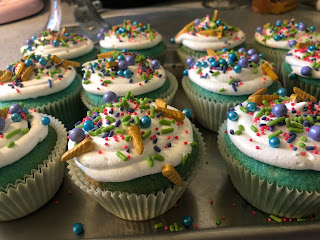 anyway, i left the cake on the counter and then got started with the rest of the prep - putting up decorations, finishing the setup of the candy/favor table, you get it.  and then about 45 minutes before the party start time, the old lady walked into the kitchen and two seconds later i heard "oh moooom...your cake."

my heart sank.  i knew from the tone of her voice that it wasn't good, and when i walked in i saw it:  the top two layers of the cake on the floor, having slid off of the cake plate and crashing down, taking that delicate die-cut cake topper along with it and smashing it to pieces.  and then i couldn't help it:  i burst into tears and had the biggest meltdown i've had in a long time, and you know it was bad because i didn't even stop to take pictures of the disaster.  i knew the hub, who'd walked in right behind me, was super torn between comforting me and wanting to die laughing (he did a little of both, but at least the comforting came before the laughing).  and i swear to you i wanted to laugh too, because on any other day it would have been the funniest thing ever.  despair was the stronger emotion in that moment though, and i just stood there and wept like someone had just kicked my puppy.

the hub picked up the broken cake layers and took them to the sink, and i finally pulled myself together enough to grab my phone and take a picture: 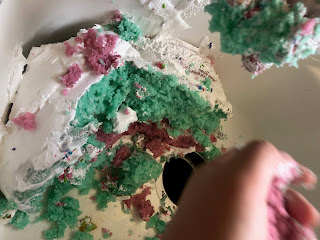 and then the three of them huddled around that sink and started eating the cake.  muahahahahahahaha. 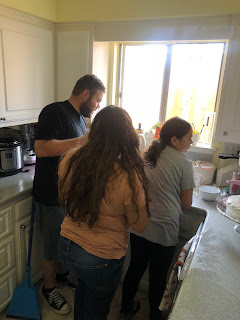 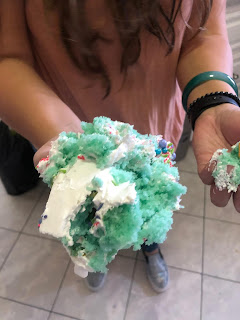 and then i dried my tears and got to work on salvaging the last two layers of cake.  the old lady cleaned off the smeared frosting from the plate and helped the hub clean the mess on the floor, and it was all okay.  i fixed the frosting on the cake, used up more of those sprinkles, and this time put two squishies on top to make up for the lack of cake topper.  it ended up like this: 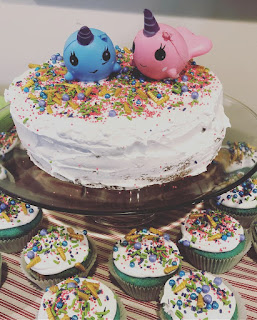 clearly, i need to work on my cake baking and decorating skills.  i feel the need for redemption.
at October 09, 2018

Email ThisBlogThis!Share to TwitterShare to FacebookShare to Pinterest
Labels: birthday extravaganza, cake for breakfast is good, the bean's birthday bash