it's a dog-eat-dog world

even before the old lady and her special friend made their big move into their first apartment together, they were already talking about adopting a pet.  the old lady has always wanted a cat, although after our visit to the cat cafe a couple of months ago she came to the realization that maybe she really wasn't much of a cat lady after all.  and her special friend has always been more of a dog fan, so they decided to start casually looking at what was available at the local shelters.

and then they decided that things were still a little too hectic as they were getting settled into their new place and figuring everything out, and the dog got put on hold for a bit.

while they were on their hawaiian vacation last month, they revisited the topic and decided that since they'd blown all of their vacation days for a while and wouldn't be going away anytime soon, maybe it was a good time to look again and see what their options were.  they knew they couldn't have a big dog, especially in a second floor apartment, and thought maybe a dachshund, a terrier  or a chihuahua mix of some sort would be a great addition to their little household.

she texted me one afternoon and said that they'd fallen in love with the cutest little terrier mix who'd been brought to the pasadena humane society.  he was still a puppy, not quite a year old, and the previous owner had decided after just two days that he wasn't the right match for their family.  the poor little thing had some anxiety issues, but had warmed up to both of them within just a few minutes.  she was ready to take him home right then and there, but after some discussion they ended up leaving without him.  the lady who was helping them told them that if they changed their minds they could call to see if he was still available when they opened again a couple of days later.

of course, they regretted not taking him home as soon as they left, but the office had closed by then and they had to wait two long days before they could go back to get him.  the old lady asked me to come with her to pasadena bright and early after dropping off the bean at school, and so we headed out to fight rush hour traffic and get to the humane society when they opened their doors at 9:00. 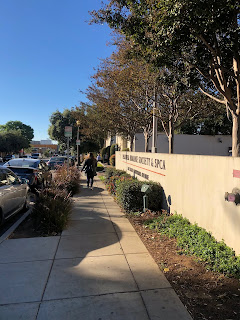 there was already a line of people there when we arrived, even though we were a good 15 minutes early.  a staffer came out and had everyone sign in, offering applications for adoption to those who hadn't yet completed one.  and it seemed that everyone who was there had already turned one in and knew exactly which pet they were there to adopt. 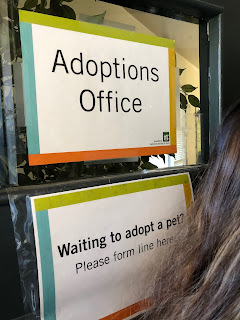 sadly, when it was the old lady's turn, we found out that their puppy had been adopted later in the afternoon on the day they'd met him.  she was so upset and i felt so bad for her, and then we headed out into the kennels to check out the other dogs available for adoption and she seemed to cheer up a little...especially when she walked up to this super cute little guy who was really excited to see her. 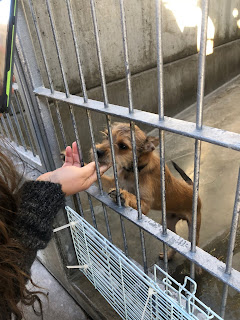 they had met him the other day too, and it turned out that he was a stray who had been brought in just days before.  they have to keep strays for a certain amount of time, to allow anyone who might be their owner to come and claim them.  she talked to the office to see when he would be available for adoption, and then we left.

she called the office again the day before he became available, only to find out that there were four other families who'd expressed interest in taking him home.  adoption is done on a first-come, first-served basis and we'd already seen how busy that particular humane society is even on a random weekday morning.  and so to avoid disappointment, they decided to go back together and go through the kennels in search of a friend who was available to go home right away.

that's when they found stevie.  and through a somewhat convoluted string of events, they ended up having to leave him there one more day because the office had closed by the time they left the kennels to start the adoption process.  but the next day, they raced over right after work and pretty soon my phone buzzed with their first family photo: 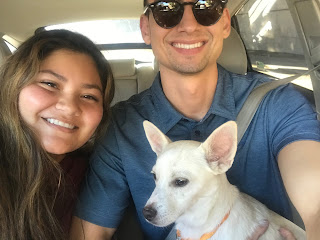 he's still a puppy too, estimated to be around 14 months old, and he's some sort of chihuahua mix.  mixed with what exactly, we're not sure.  they seem to think maybe he's got a bit of corgi in him.  anyway, he had also been returned by some dude who took him home and then realized that he was going to have to leave him alone for 12-14 hours every day while he was at work.  sheesh.

when i finally got to meet him, he was pretty skittish and took a little while to warm up to me and let me pet him.  but he's going to learn to love me.  because, duh.

the bean and i went over to their place one evening, invited to share a home cooked meal by the old lady, and she was super excited to meet stevie.  as with me, he didn't play with her right away, but she exercised some patience and eventually he came over to let her love him.  he hung out down by our feet as we ate, and this is when i realized that he looks exactly like bolt, from the disney movie. 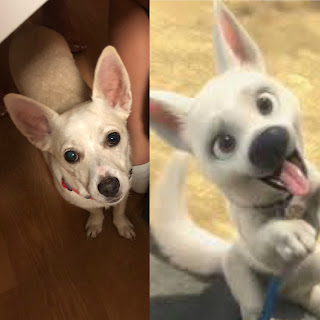 i'm campaigning real hard for them to change his name.  because come on...he's clearly a bolt!  we'll see.  i'm still working on it.  i'm prepared to lose though, so he'll just have a secret second name with me.  heh.
at October 25, 2018