it's red ribbon week, and while the bean's school doesn't do the whole dressing-in-theme every day thing, they did give the kids the option to wear red one day.  i'd gone to target to pick up a plain red top for her to wear, along with a khaki skirt for the girl scouts rededication ceremony we were attending that evening.  i giggled a little when she tried them on for me, because with both pieces put together she looked like she was getting ready for a shift as a target cashier or something. 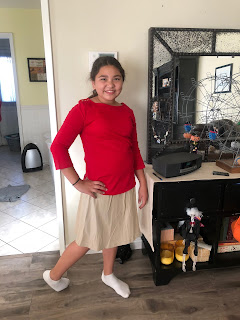 i halfheartedly tried to convince her to wear it for halloween, but she wasn't nearly as amused as i was.  kids these days.

a couple of hours later, she was ready for the ceremony.  it's amazing to me how much she's grown since she started girl scouts.  i mean, look at this...only four years ago (also, the pose still kills me): 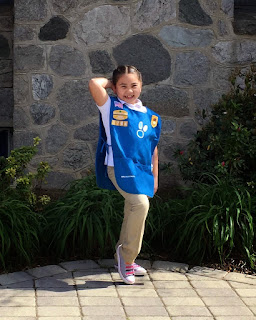 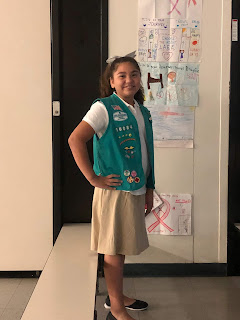 two of her besties are in the new troop as well, and i'm glad we were able to keep at least a few of the girls together from our old troop. 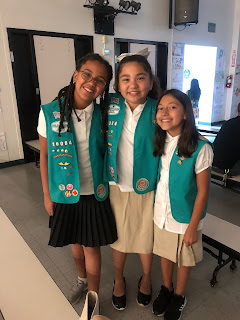 these troop leaders have their shit to-geth-er.  unlike us, their troop is steeped in girl scout traditions.  they're ultra organized and participate in everything available to them and do things in a very traditional way.  attending their meetings always makes me feel like the biggest slacker troop leader.  heh.  although i know our girls had a blast when we were a troop, and i have to admit that although i don't miss dealing with the service unit and council and stupid politics, i really miss the meetings with the girls and all the fun we used to have together.

anyway, the meeting started off with the usual stuff...pledge of allegiance, girl scout promise, etc.  and then they moved on with a short bio of juliette gordon low, founder of the girl scouts and whose birthday is on 10/31.  scouts celebrate her birthday in some way every year. 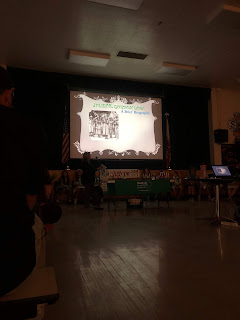 and then the rededication ceremony started, consisting of the leaders kicking off the recitation of the girl scout law line by line, lighting a candle for each one.  two girls were called up at a time to recite the rest of the laws and light the candles.  it was all very official. 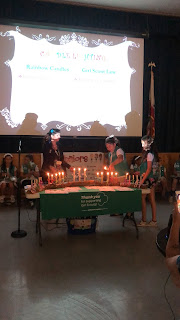 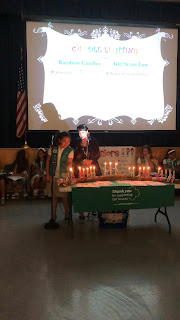 after she'd done her candle, she did the official girl scout handshake with one of the leaders, who then handed her a rededication certificate. 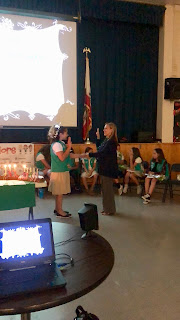 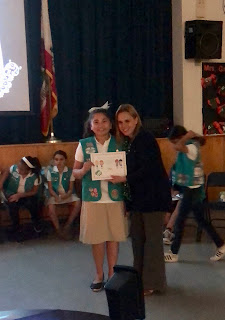 now, because she's on two teams with her cheer squad this year, she's not able to attend a good number of the regular meetings.  luckily she isn't the only one who's faced a situation like this and i've heard that the leaders are fantastic at helping the girls keep up with the troop by doing badge work at home and having them attend when they can.  for the bean, that won't be until about mid-february.

that's okay, though.  i'm just happy that she's still in a troop and still happy to be a girl scout.  and we'll be working towards a trip to san francisco over spring break for the bridging ceremony.  it's going to be so cool for them to walk across the golden gate bridge to signify their transition from junior girl scouts to cadettes.