as much as i am a huge disney fan, i'd not really seen a whole lot of marvel movies.  i think until a few months ago i'd only ever watched the first iron man movie, which i remember really enjoying but never really followed up with the sequels.  and the girls and i actually went to the theater to see the last two avengers movies - which, looking back, was really kind of bizarre considering we hadn't seen most of the other movies that led up to them.

and then when disney+ debuted, offering up almost every marvel movie aside from the hulk and the spiderman movies (due to licensing issues or something i haven't really bothered to look up), i decided that i wanted to watch all of them in order.  i wanted to see all of the origin stories for the characters and finish up my marathon with another viewing of avengers:endgame that would make more sense to me having seen all of the backstories.

did i ever mention that the original reason why we even started talking about remodeling the house stemmed from a discussion about how cool it would be to drive a tesla?  it started there and moved on to how it would be awesome to convert the house to solar so that we could harness the power of the sun to fuel the car.  and of course, that meant that we needed to replace the roof...and while we were at it, might as well rip out the carpet and replace it with hardwood, or tile, or something cool.  but then if we were going to do all that, it seemed like the best time to go ahead and reconfigure the rooms the way we'd always talked about since we moved into the house ten years prior.  and then we stumbled upon a screaming deal on the stove/oven that ended up sitting in the garage for two years before we finally got our shit together and designed a kitchen around it.  craziness, right?

with the house mostly done (which i should probably recap here one of these days too, huh?), a couple of weeks ago we finally started looking at the options for the tesla.  we put down the deposit and placed the order, and then we sat back to wait the 4-11 weeks that was quoted as our timeline for delivery.

but then last week, while i was getting ready for a rare date night with the hub, he texted me with pictures of a used tesla at a dealership that was close to the restaurant we had dinner reservations at.  "let's go test drive it before dinner," he said.  it was a year old with low mileage, and was pretty much exactly what we'd ordered online the week before.  but because it was used, the sticker price was considerably less than the new one we were waiting for. 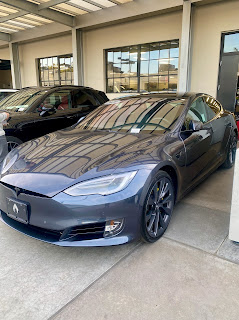 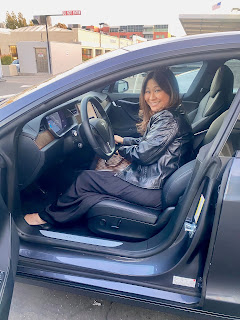 we took it for a couple of loops around the block and then took the salesman's card and headed off to dinner.  i knew we were both pretty much sold on the car, but we went home to sleep on it and by the next morning we'd made the decision to head back out and bring it home.  the only bummer was that when we got there, they hadn't had time to charge it up for us and so we had just enough juice in the battery to get it home.  i plugged it in the second i got it into the garage, and that's when i realized that there was a whole lot i needed to learn about this car...with the cable that came with it, it was charging at the glacial pace of 4 miles per hour.  yikes. 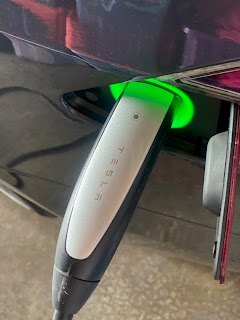 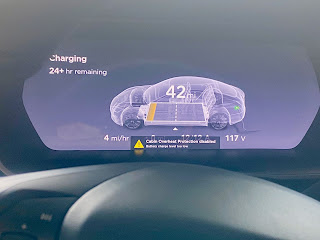 the bean was bummed when i told her that we'd still have to take the old car when it was time for her math tutoring session, so i promised her that when i came back to pick her up for cheer practice i'd take the new car.  by that time we'd added a whopping 15 miles to the range. 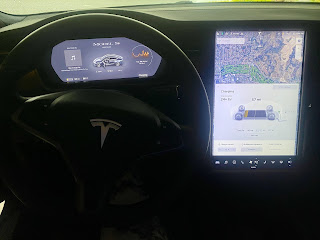 we got to the gym a little early and had some time to browse through all of the menus on the gigantic screen display, and we were both really amused to find that not only did we have access to netflix, hulu and youtube but a decent selection of video games PLUS "caraoke." 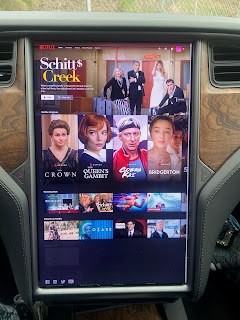 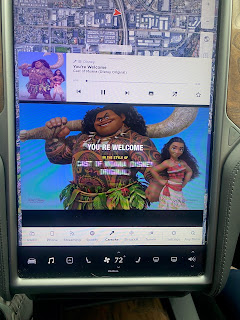 oh!  the marvel movie marathon story did have a point...because when i went to download the tesla app onto my phone i found that i had the option to give the car a name.  with all of those movies (plus the wandavision series on disney+) still fresh in my mind, it seemed only natural to choose "jarvis."  the old lady and the hub both liked it, and the bean just rolled her eyes in typical teenage fashion.

"jarvis" is, of course, unavailable for a personalized plate.  bummer.  but i don't care.  i love my new car, and i'm pretty excited to break free from the soccer mom mobile!  and the best part?  no more gas stations!

Email ThisBlogThis!Share to TwitterShare to FacebookShare to Pinterest
Labels: wan's got a new car