so while we still haven't tried the "cereal killer" cheesecake recipe i mentioned before, i did finally get a chance to make something else i've had saved for awhile.  i'd seen the "magic chocoflan cake" on twitter or instagram or some other social media outlet before, and figured it was meant for me.  i mean, it's some crazy hybrid of delicious chocolate cake and creamy flan - ain't nothing wrong with that.  and i wanted to see if it really would work - the process involves pouring the two batters into the same pan, with the chocolate cake magically floating to the top of the pan so that when flipped upside down, the flan would be on top of the whole thing.

the recipe i was using was created for the instant pot, which was perfect since it only accommodates a small sized bundt pan.  i knew that this treat would only be enjoyed by me and the bean since the hub still isn't doing sugar and the old lady can't stand flan, so we didn't need a full-sized cake in the house.  the first step was to pour some caramel sauce into the bottom of the pan:

then i mixed up the ingredients for the chocolate cake.  pretty basic - butter, flour, cocoa, sugar, baking powder, egg, you get the gist. 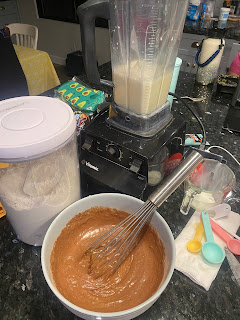 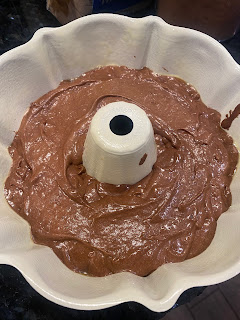 then i made the flan mixture and poured it carefully on top of the chocolate batter. 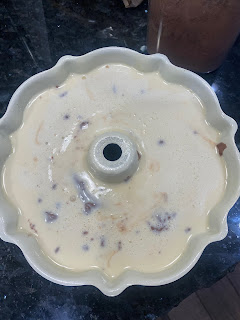 i covered the pan with foil and lowered it carefully into the instant pot, placing it on top of a trivet that kept it above the water poured into the bottom of the pot.  it only needed 22 minutes of pressure cooking and then ten minutes of natural release before opening the pot to take the cake out and let it cool for about an hour before flipping it over onto a serving plate.

i was so excited to see that it actually worked - chocolate cake topped with a layer of flan and caramel sauce.  so cool! 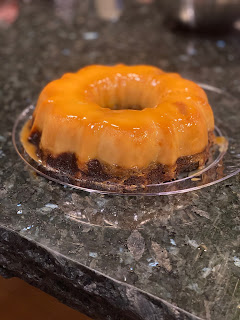 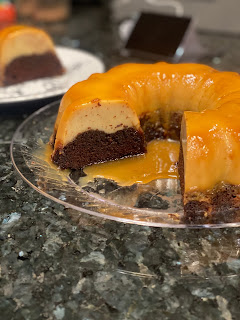 and i'm happy to report that it was just as good as it looked.  it was a really good combination of textures and flavors, and so much easier to make than it seems.  maybe if we ever get to host a party at the house again, i'll make it to serve.  heh.

Email ThisBlogThis!Share to TwitterShare to FacebookShare to Pinterest
Labels: adventures in cooking, cake