did you know that you can order chocolate straight from the hershey factory?  i didn't either, until an ad popped up on my facebook timeline offering up reese's cups fresh from the factory in pennsylvania.  i didn't really think much of it because it never occurred to me that it would really be much different, but that ad was persistent.  after about the tenth time, i finally decided to click on it and read the comments on the post.  people absolutely RAVED about the stuff, talking about how much more delicious these cups were than the ones you buy in your local store.

of course, i was intrigued.

and as i usually do with things like this, i showed it to the old lady to ask her what she thought about the idea.  and of course, because peanut butter is pretty much her most favorite thing in the whole wide world, she was all about it.  when i went to the website, it turns out that "direct from the factory" products are only offered a handful of times throughout the year and i'd just happened to catch it a few days before they stopped taking orders for this round.  i placed an order and then promptly forgot about it until this showed up on the doorstep: 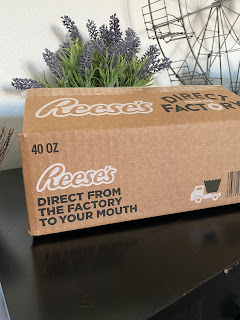 we tore it open right away. 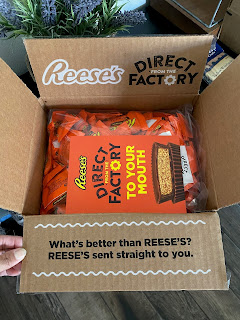 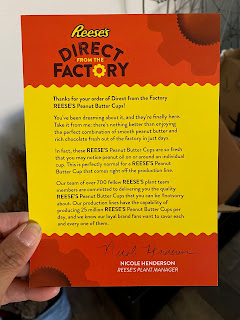 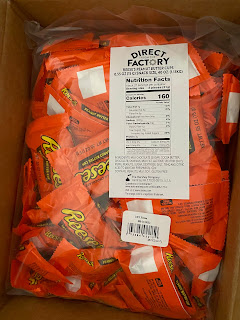 the old lady went first.  she opened that bag and ripped open that first package, and we all ooh'ed and ahh'ed over that fresh, shiny chocolate.  it was so fresh, there was still peanut oil on the wrapper when she took it out. 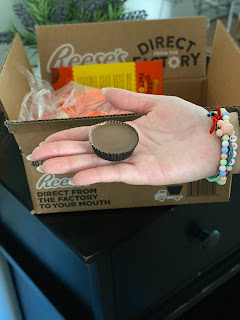 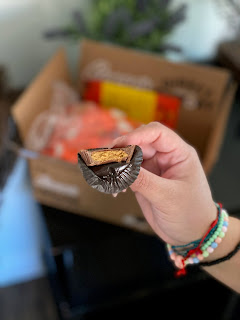 and when we each ate our first cup, we understood what all the hype was about.  the chocolate was smooth, the peanut butter was soft and it just tasted so much better than any other reese's cups we'd ever had before.  life. changing.  SO GOOD.
we've been savoring those cups, only letting ourselves have one serving a day (which, i know, is how you're supposed to do it anyway).  they're so delicious that it would be really easy to plow through that whole case in like a day or two.  but we're working on restraint.  so far, it's working.
and if you get the chance to try a factory fresh reese's cup, i HIGHLY recommend taking it.  you're welcome.
at April 19, 2021

Email ThisBlogThis!Share to TwitterShare to FacebookShare to Pinterest
Labels: reese's