the kids and i headed out to the grove last week for some fresh air and some retail therapy.  none of us could even remember the last time we'd been there (although i guess i could probably search for my last blog post about it, huh) and we were kind of excited to see what was new and different.

we grabbed a snack at wetzel's pretzels, something none of us had had in a really long time.  and it was so good...because carbs are our friend.  i didn't even get a picture because we totally hoovered those things up in no time.

the nike store was our first real stop, where the girls picked out some new kicks.  because who doesn't love new shoes?  and then we browsed through a few other stores before we decided that the pretzel had only served as an appetizer, leaving us even hungrier.  when we'd pulled into the parking structure we passed umami burger with a sign outside that said that they were also serving up other deliciousness, like nashville hot chicken sandwiches and something else that had caught our attention - krispy rice sushi.  we all know the bean lives for sushi, and even the old lady was interested in some of the things on their menu and so that's where we headed.

with the new health guidelines, we were actually able to sit inside.  normally we would have still chosen outdoor seating, but it was a little chilly that evening and the dining room was practically empty.  and so we sat at a booth, marveling at how weird it was to be sitting inside an actual restaurant after a year of take-out, delivery and outdoor dining.

look how cute their soy sauce packets are:

and the little characters continued on other items, too. 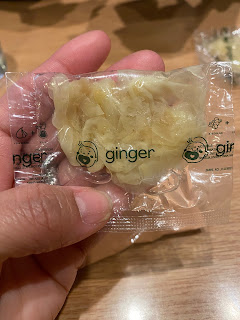 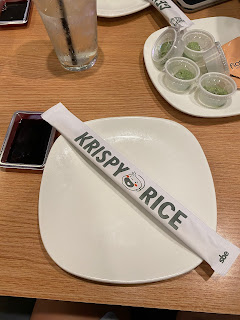 our sushi was brought to us in to-go boxes.  kind of wasteful, but i guess that's just how things are going these days, dine-in or not. 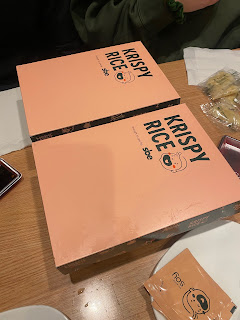 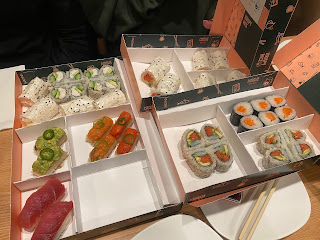 everything was delicious, by the way.  even my weak ass chowed down on the spicy tuna krispy rice sushi - partly because i really wanted to try it since it's obviously their specialty and also because it really wasn't very spicy.  i also really enjoyed the salmon/yuzu krispy rice sushi, and everyone had seconds of the baked crab hand rolls because they were that good. 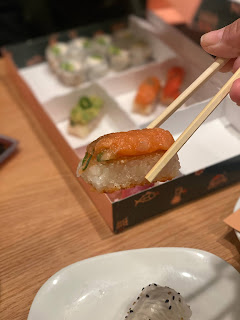 after we'd stuffed ourselves silly with sushi, we headed back into the grove where we stumbled across the new store owned by drake - october's very own.  i really don't know much about it, but the old lady and her special friend had wanted to check it out so they were happy to check it off the list.  with sweatpants hovering around $250 and fairly plain tees priced at $50ish, we walked out emptyhanded. 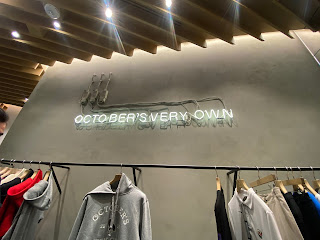 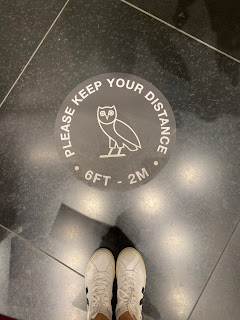 on our way out, i got them to stop for a quick selfie with minimal moaning and groaning. 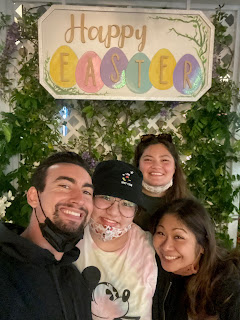 we stopped here to grab some ice cream that the old lady promised would be worth the drive (spoiler alert:  it was). 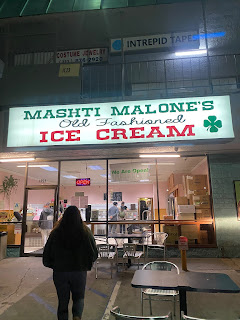 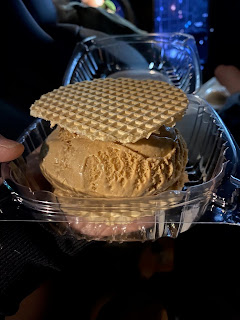 and back at home, the bean was stoked to open a gigantic box sent from her grandma that contained a full set of brand-new BTS plushies. 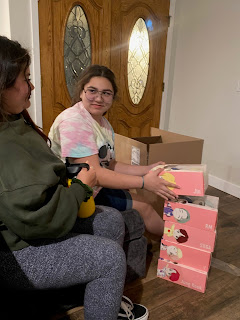 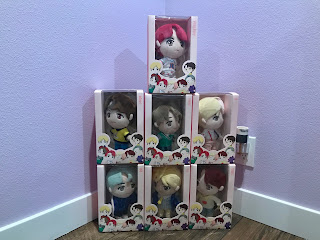 i'd say it was a pretty good saturday indeed.

Email ThisBlogThis!Share to TwitterShare to FacebookShare to Pinterest
Labels: BTS, the grove