leaving the broadmoor was kind of a bummer.  we'd been so intent on getting out and doing stuff and packing as much as we could into the little time we had that we never got around to just hanging out at the resort and relaxing.  given the option, i would have gladly taken one more day so that we could have done just that.  we didn't get to take advantage of the fabulous pools, the super high tech fitness center or the paddleboat rental, or even just hanging out here: 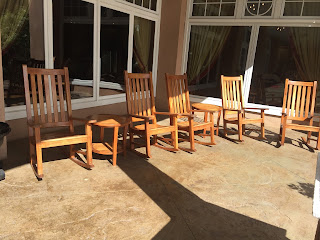 we got ourselves ready and packed, leaving just enough time to take one last stroll around the grounds and say goodbye to the ducks. 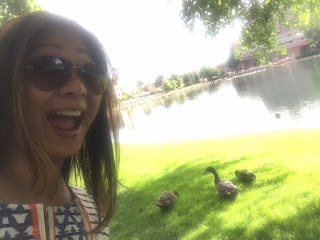 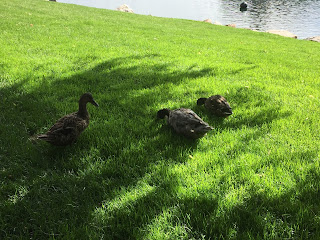 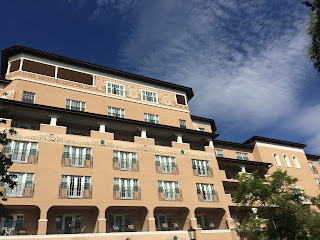 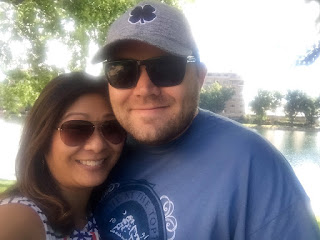 i managed to make a final purchase in the gift shop - a super cute pair of lilly pulitzer shorts that they had to order and ship to me because they didn't have my size in stock - and when we checked out we found that we'd done a splendid job of using our resort credit.  between room service, purchases in the shops, coffee breaks, and the hub's late-night drinks with his cigars, we managed to use up every bit of it...with $1.75 left over.  ha!  we were convinced that we'd have to cover some part of the expenses we'd incurred over the weekend, so it was pretty awesome to find that all we had to do was leave.

getting through security at colorado springs airport was much, much easier than it had been at LAX.  not to mention, the TSA agents were so friendly and helpful - no surly, grouchy folks here.  maybe it's the altitude.  heh.  and here, there are cute little chairs for little kids to use while their parents juggle their carry-ons and putting their shoes back on and such. 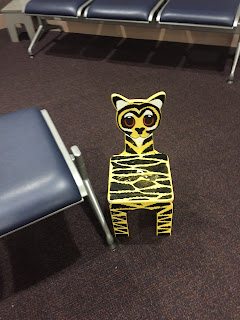 alas, that's where the cheerfulness ended.  our flight was scheduled to take off just after 11, which would have gotten us to LAX in the early afternoon.  i was looking forward to getting home and unpacking, starting up some of the chores i'd neglected during our travels, blah blah blah.  but we'd already been alerted on the way to the airport that the flight had been delayed by half an hour.  okay, that was tolerable.

except that as time went by, the blue skies disappeared and were replaced by some rather ominous-looking clouds. 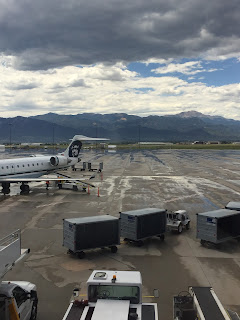 not much later, the gate attendant hopped onto the mic and announced that because lightning strikes had occurred within the 7-mile radius around the airport, the entire ground crew was being put on hold and taking cover.  the fueling truck that had been working our plane drove off, and all activity outside ceased completely. 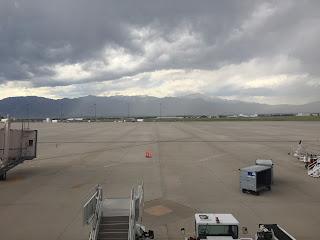 everyone stared outside, watching the electrical show that came on every few minutes, and then the pounding started. 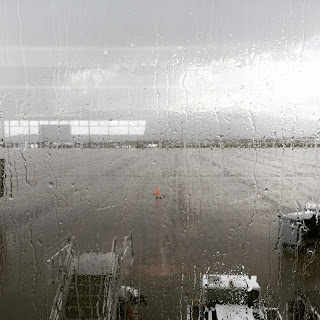 it got really loud for awhile, and that's when we all noticed that the rain had turned into hail. 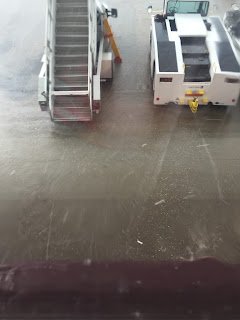 every half hour or so, you'd hear everyone's phones chime in unison as the airline's text message updates came through. 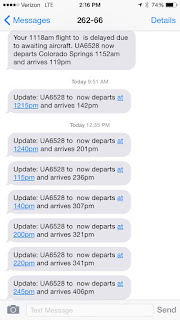 finally, the hail and the rain and the lightning came to a halt.  the ground dried up almost completely, and then the fueling truck made a reappearance along with the ground crew.  it was about 3:20 when we were finally allowed to board the plane. 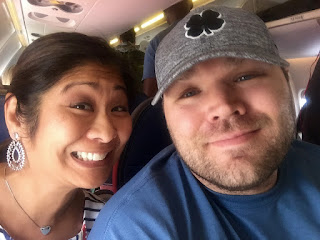 but then, guess what?  yup, you got it - we were delayed yet again.  something about some sort of tape on the nose of the plane that the mechanics had to inspect for stickiness or some shit.  i don't even know.  all i know is that we sat in our seats for a good half hour-45 minutes more before we were finally cleared to take off.  about five hours after we were supposed to have left the airport, we were flying over the grand canyon. 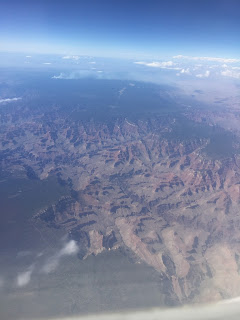 i don't think i've ever been so happy to see LAX before. 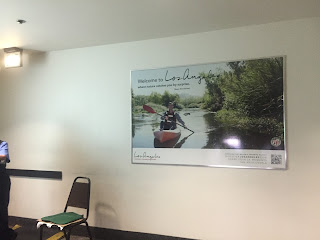 of course, it took a long time to retrieve our baggage.  and then catch the shuttle back to the parking garage.  but hey, we finally made it back to the car! 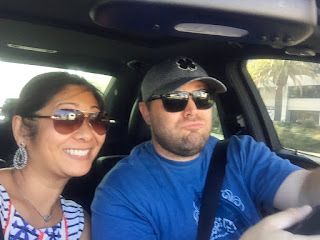 as we made our way out of the structure, we realized that we were hungry.  it'd been hours since we'd eaten anything substantial, and when it hit us that we were in no rush to get home, we decided to try somewhere new.  after all, the old lady was at work till late and the bean wasn't even in the same damn state as us.  so this is where we ended up: 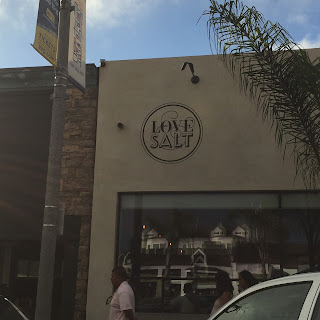 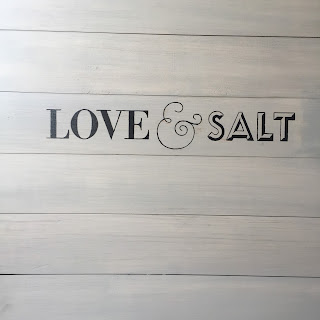 we didn't have a reservation and didn't really want to sit at the communal table, but found that the bar was relatively empty and offered the full menu. 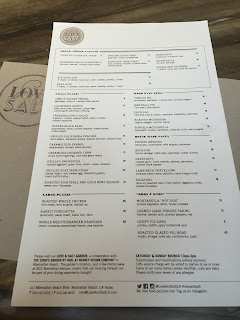 the hub selected the albacore tuna toast for his appetizer, which he devoured happily. 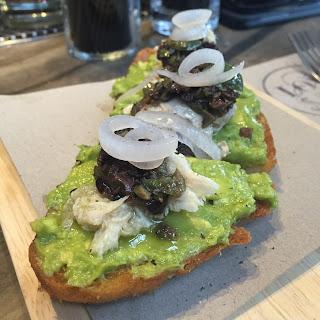 i opted for the gnocchi, served with prosciutto, mushrooms, arugula and parmesan: 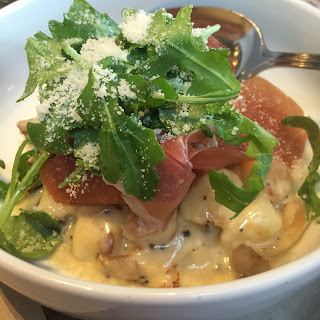 and then we shared the meatball pie. 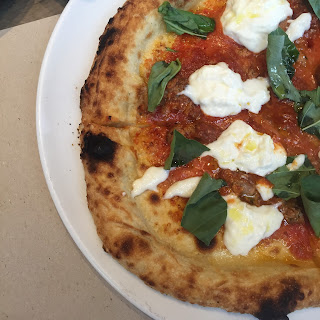 for dessert, we shared "not another budino" - hazelnuts, milk chocolate and sea salt. 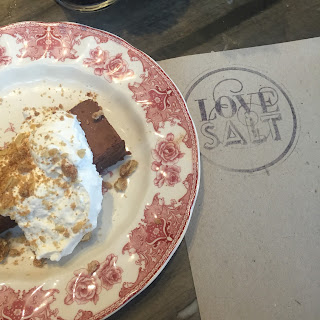 everything was absolutely delicious, and what better way to end a day full of highs and lows than with a great meal?
at August 11, 2015