because we've been to dallas several times by now, this time we decided to try something different.  the guys headed out the next morning and picked up a rental car for me and the hub, we closed up our suitcases and headed out for a road trip.  destination:  new orleans! 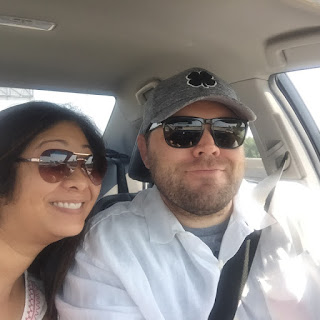 it seemed to take forever to drive across texas and into louisiana, but after several hours we finally saw this: 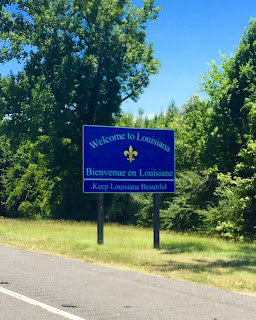 we'd gotten a fairly early start and had been snacking along the way, so we waited until we got into shreveport before stopping for some grub.  yelp told us that our best bet was here: 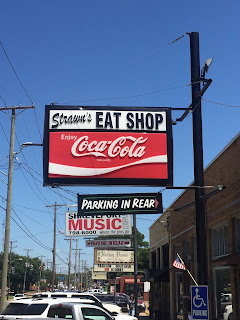 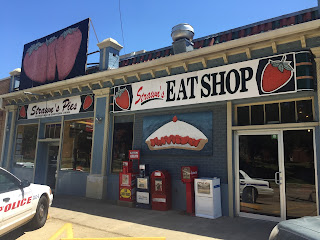 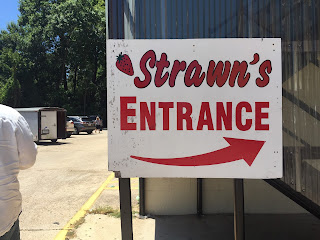 and it was a good call.  we enjoyed listening to the chatter around us and our server's thick southern accent, and the bean was enthralled by the various murals painted on the cafe's walls. 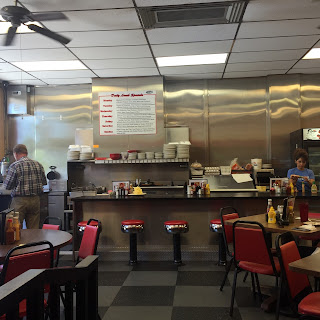 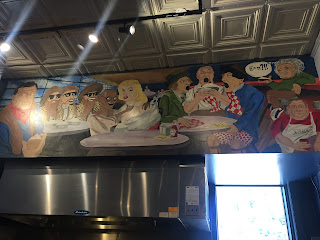 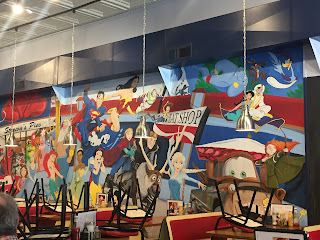 my bacon cheeseburger was solid.  it looks like a basic burger, but it was full of flavor and was totally delicious. 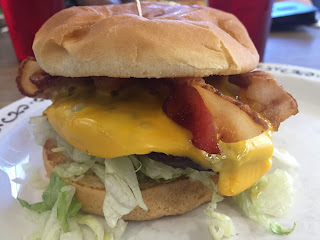 and although we were all full from our meals, we couldn't pass up a piece of the icebox pie they're famous for.  chocolate cream.  YUM. 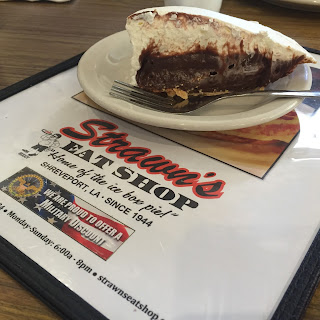 we stopped to fuel up, and i love going into the mini marts at gas stations to check out local snacks.  this one didn't disappoint - dried shrimp, anyone? 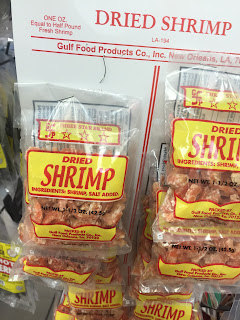 i didn't buy any, but that doesn't mean i wouldn't have tried it had i not been stuffed from lunch.

and as i always do, i took a nice nap during the last leg of our drive.  the hub so kindly captured this for me: 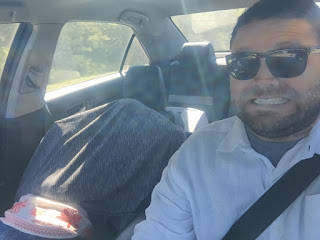 finally, we made it to n'awlins.  it's hard to believe it's almost been a full decade since the superdome was used as a shelter for those who were displaced by hurricane katrina. 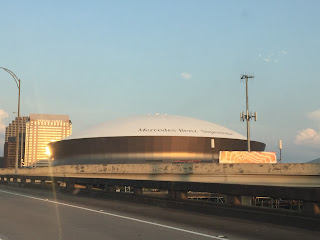 as we made our way to the french quarter and the hotel we'd scored via priceline, i got my first look at bourbon street, already crowded at 6:30pm. 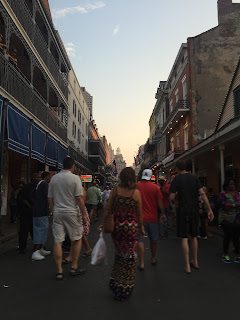 the omni royal orleans was our home for the next few nights.  rooms were on the small side and there was no view to be had, but for the price we paid, it was a steal. 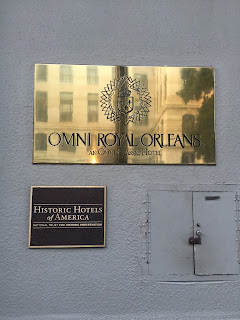 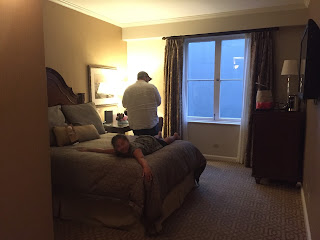 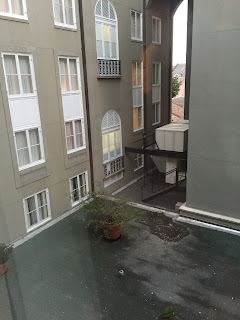 and the lady at the front desk happily greeted the bean and handed her a little activity pack as a welcome gift, which i thought was really sweet. 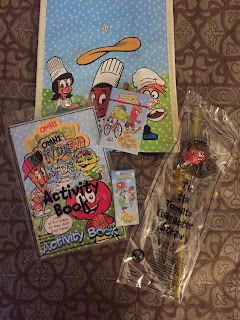 after we'd gotten settled, we met up with the ILs again and took a short walk down the street to another yelp-recommended restaurant for dinner. 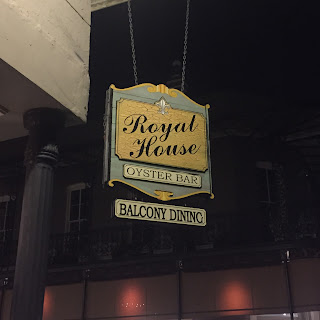 the hub had a crock of french onion soup (super delicious) and a "taste of new orleans" - a trio of jambalaya, crawfish etoufee and seafood gumbo. 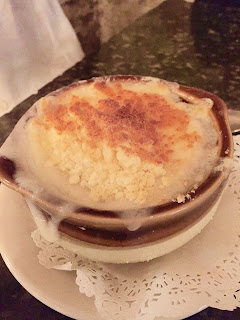 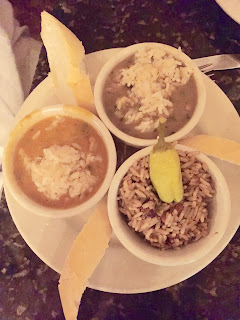 the bean opted for something boring off of the kids' menu, but found herself eating off of my plate of baked shrimp tortellini.  i know, i know, that sounds boring too - but man, was it tasty. 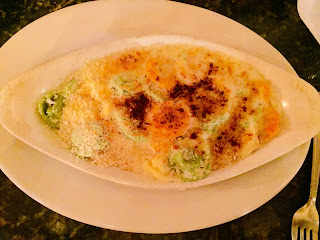 as we headed back to the hotel, she paused to drop a couple bucks into the guitar case of these street performers. 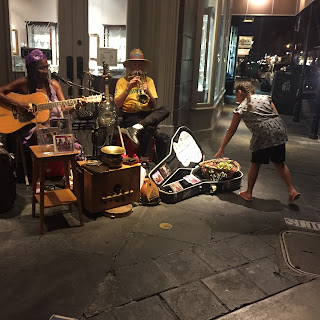 then as the hub stopped at the concierge desk to arrange something fun for the next day, MIL somehow talked the pianist into letting the bean sit down and play something.  my kid's first bar gig - i was so proud. 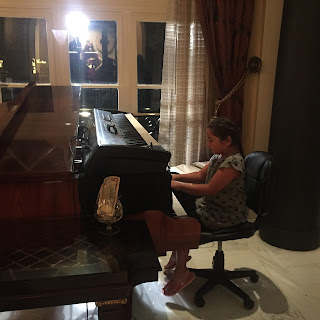 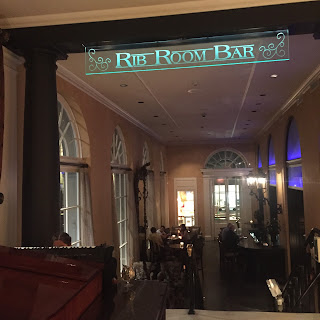 no, actually, i was really proud of her!  with her recent triumph at the piano recital still fresh in her mind, she performed her piece perfectly.  the pianist thanked her and complimented her on her skills, which made her blush a little.  it was very cute.

the three of us headed upstairs to check out the hotel pool, and while we were up there found stairs leading up to the observation deck.  it was breezy and slightly cooler up there, and the bean liked peering through the viewfinder to look out at the steamboats on the river. 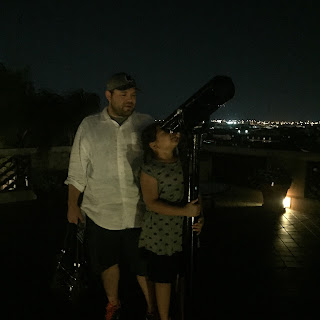 the hub decided to head out to smoke a cigar and relax a little, while she and i hung out in the room and did some relaxing of our own. 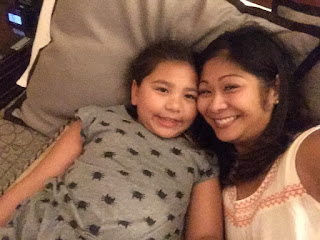 it didn't take long before we were both snoozing up a storm.  i don't think either of us even stirred when the hub made his way back in.  and that bed was extra comfy, especially after the long day we'd had.  more fun was coming our way the next day, and we needed all the rest we could get.
at August 18, 2015