suck it up and drive through that snow

after we left the crazy horse memorial, we ended up stopping in custer, the little town just down the street from mount rushmore.  we were hungry and figured we'd find some breakfast before making our way to jackson hole.  we ended up here: 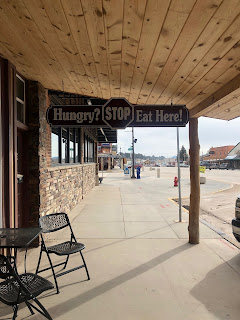 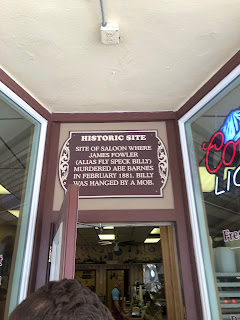 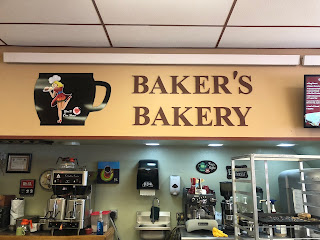 the food was good, although nothing particularly special.  we shared some housemade donuts and enjoyed some basic breakfast fare with toast made with freshly baked bread.  and then after topping off the gas tank yet again, we hit the road. 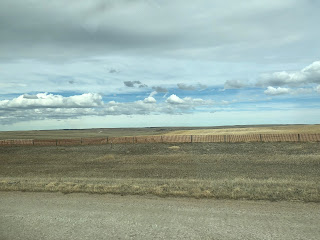 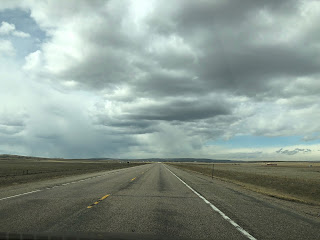 we drove through scenery much like this for several hours, with lots of cows and deer and horses to look at along the way.  and thank goodness for the satellite radio in our rental, because while we went through long stretches of road where we had zero cellular service, we never lost the signal for music. even our local radio station was available for us to listen to, so we still got to hear ryan seacrest's morning show whenever he was on.  and as we crossed the border out of south dakota and into wyoming, the temperature dropped and dropped.  before we knew it, we were driving in more and more snow until we got to...this. 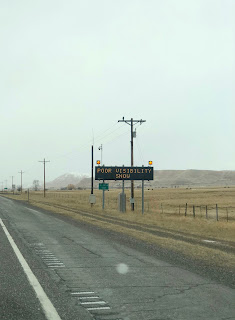 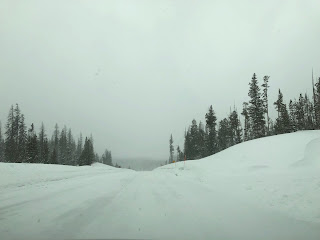 getting stuck in the snow at mount rushmore made us a little skittish, and without chains to put on the tires we got a little nervous about driving on this road.  and with no one else in sight (and none of the few businesses we were passing being open), we turned around and headed back to dubois, where we'd seen a gas station and mini mart that was open for business.  the hub got out of the car to ask about alternate routes to jackson hole from there, and he disappeared into the mini mart for a few minutes.  he came back with a rather sheepish smile on his face, and informed me that we were just being wussy southern california snowflakes.  the people he'd talked to inside basically told him to drive carefully and just power through.  and so we did.

as we drove on we found one car in front of us - a toyota camry with south dakota license plates on it that wasn't hesitating for a moment to drive on that snowy road.  there was a cop in front of him and another one behind us, and so we felt a little better about the situation we'd found ourselves in. 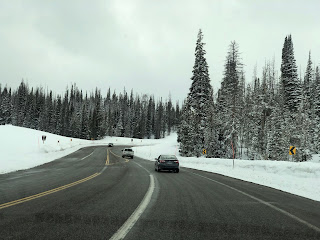 but then both of the police officers stopped to check on a car that was parked on the side of the road and that left us with just our camry friend to keep us company.  and then we were back to where we'd turned around again. 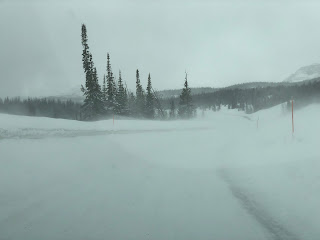 i think both of our stomachs were twisted in knots as we drove through, following that camry as they sped along with just a glimpse of their taillights in front of us that guided us through.  for a lot of the drive they kicked up snow behind them and it was kind of hard to see very far in front of us.  and with the snowbanks on either side of the road taller than our car, we figured that even if we did any sliding around, all we'd do is crash-land into a pile of snow.  seeing some blue sky and glimpses of sunlight was a very welcome sight. 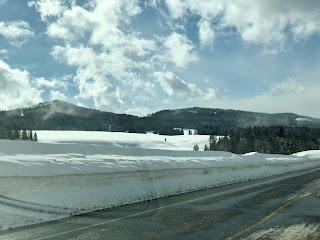 and then finally...finally...we made it through. 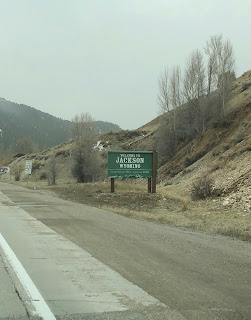 turned out that our hotel was about ten miles past jackson, in teton village.  so pretty, right?  and like 12 degrees.  brrrrrr. 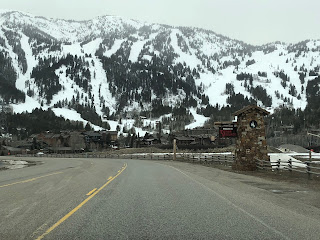 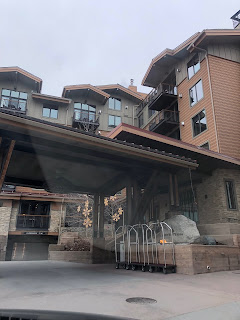 while the hub checked us in, the bean and i took in our surroundings. 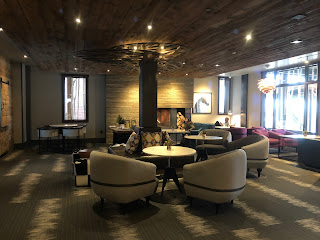 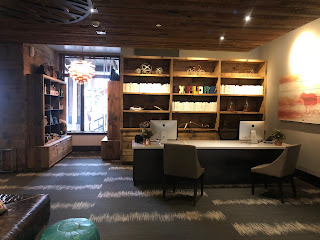 our room was on the fourth floor of the building next door, right by the elevator. 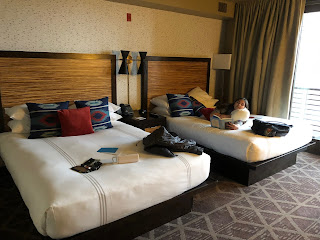 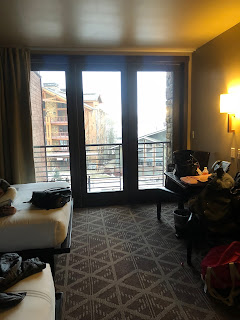 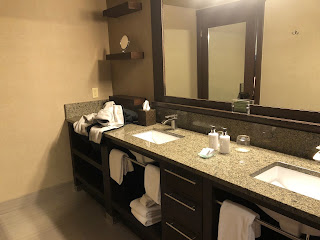 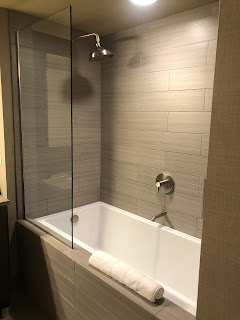 we had a great view of...the hot tub.  which was actually occupied by several people while the snow came down around them. 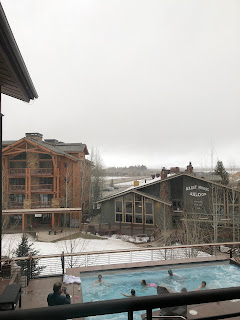 after we'd had a chance to settle in and relax a little, we headed downstairs to get some dinner in one of the restaurants. 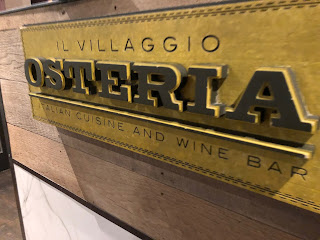 the warm mozzarella appetizer was delicious, as was the house bread. 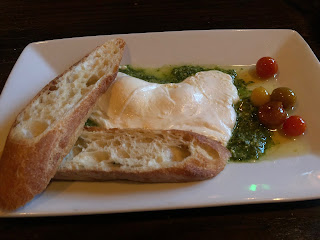 the bean ordered a prosciutto and mozzarella pizza: 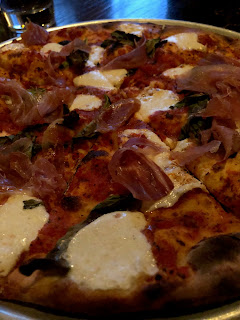 i had the short rib gnocchi: 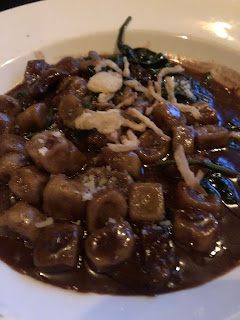 and the hub had some simple spaghetti and meatballs.  we capped off our meal with some dessert - a mini mint chip ice cream sandwich, a rich flourless chocolate cake and a panna cotta affogato served with lemon biscotti. 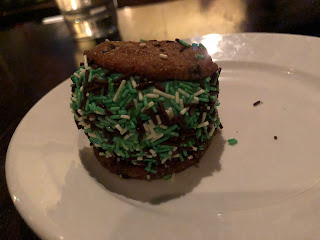 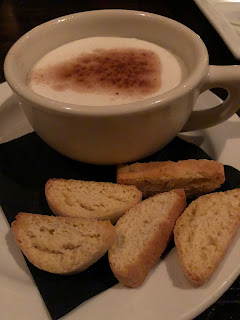 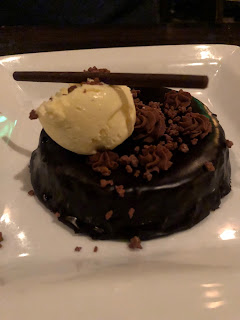 the hub came upstairs with us to grab a cigar to take down to the bar while the bean and i changed into pajamas and got cozy in the beds, and while he was disappointed to learn that the entire village was smoke-free, he enjoyed some solo time at the bar before coming back upstairs to settle in for the night.

phew.  what a day.  we were so relieved to be warm and cozy and all in one piece.  and now we could relax, because we were staying put for three whole nights.  sweet.
at April 16, 2018