meeting up with stone cold and the jackal

when i was posting on social media about going to the general hospital convention back in june, i learned that one of my mom friends has been watching the show about as long as i have.  we joked around about going together next year, and then i remembered a little card someone had handed me during one of the panels.  the general hospital fan club weekend happens every july, and while i've never attended any of the events i'd kind of broken the seal with the convention.  i looked at the fan club calendar and found that the comedy show that steve burton ("jason") and bradford anderson ("spinelli") do in small clubs around the country was going to be one of the events.  i asked her if she wanted to go, and after checking her calendar and making sure she had coverage for her kids, we bought our tickets and giggled about it via text.

steve burton had done one of the panels at the convention, and he was really funny and entertaining so i was looking forward to the show.  it was at an odd time - 3:00 in the afternoon - and it was an easy drive to the embassy suites in glendale, where all of the fan club events were happening.  at the top of the stairs, i noticed a table set up with handmade items for sale and realized that emme rylan ("lulu") and kirsten storms ("maxie") were standing right there.  best friends onscreen and in real life, they share a love for crafting and emme has an etsy store where she sells her handmade jewelry and knitted items.  we would have stopped to check things out, but there was a pretty long line of folks already waiting to check in and find seats for the show.  bummer.

it was a pretty small room, and there were probably 50 or so fans present.  after a few quick announcements - like "photos are fine, but no video" and "the doors are locked, so if you leave during the show you won't be able to come back inside."  there was a rush to the restroom and the bar, and then right around 3:00 bradford took the stage.  he opened with a rendition of the golden girls' theme song. 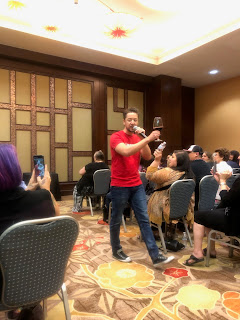 he told some great stories about his time on the show and a hilarious bit about how people react to his wife when she tells him that she's married to an actor on a soap opera.  he was friendly and funny and self-deprecating, and then it was steve's turn to hit the stage. 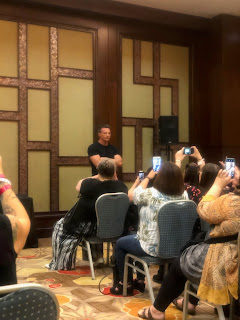 the show went for almost two hours, although we were so entertained that the time flew by.  these two are great together, and they're obviously close friends as well.  it was a fun show, and we giggled at their antics. 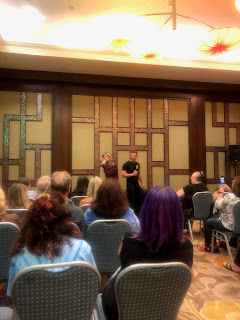 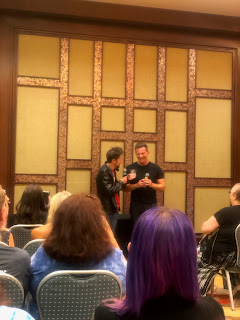 when the show was over, the guys took a quick break behind the scenes and then came back for meet & greets with everyone who was there.  they were friendly, cracked jokes the whole time and posed for as many pictures as they were asked.  bradford's wife keira, who handled their music, was also there to take the photos.  she was really sweet and i made sure to stop and thank her for being there.  she said she really enjoyed being able to attend the shows, which didn't happen as often these days as they have two kids at home, plus her full-time teaching job. 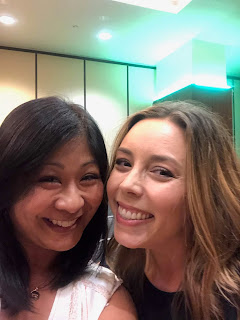 and then i got my pictures: 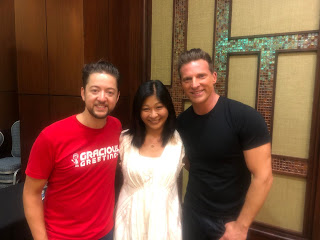 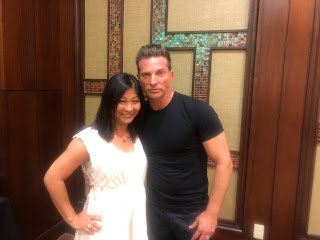 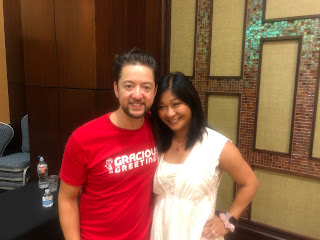 and one with my friend, too.  she's so funny - being a longtime fan of the show is her guilty pleasure and she totally balked at the idea of this picture being posted on social media.  she did give me permission to share it here, though.  heh. 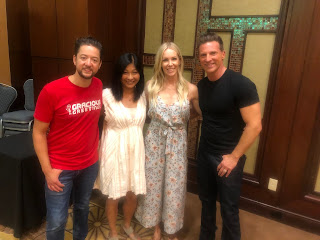 as we left the room and she headed off for a quick restroom break before the drive home, we spotted a couple more cast members getting ready to take the stage for their own show.  roger howarth ("franco") caught my gaze as i was trying hard not to stare, and gave me a smile as he headed towards the door.  and i was tempted to ask michael easton ("finn") how he'd enjoyed his trip to maui during the show's 3-week hiatus, but i decided it was probably better not to look like a crazy stalker.  and so i just settled for sneaking this photo before we left. 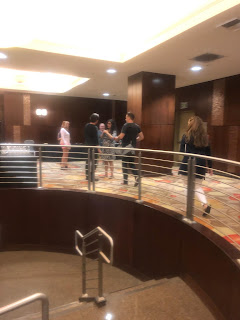 i ran into steve burton as i waited to pick up a parking validation ticket, and he was wearing a black backpack and sending a text as he walked past me.  i stuck to my "don't look like a crazy stalker" resolve and he walked out the door and out of my line of vision.

after looking at the fan club's social media and the posts from cast members who were in attendance throughout that weekend, i'm thinking that maybe next year i'll skip the "official" convention and come to this instead.  they seem to be a lot more relaxed here, and it looks like a lot more fun with the exception of the set tour.  we'll see.
at August 07, 2019