well, we survived the first full week of school!  yay!

the bean's annual "first day" photo got featured on the local news again, which seems to have turned into a tradition by now.  i'd set the broadcast to record on the DVR, but we both happened to be up at the time it came on and so we managed to catch it live.  when she saw it she was all "huh, i'm on tv again?" trying to act all blasé and shit, but you know she was secretly stoked about it.  heh. 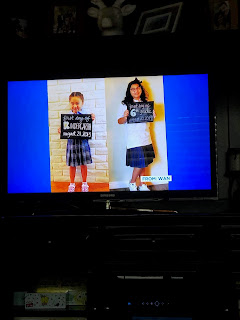 she also had her first girl scout meeting with her brand new cadette-level vest this week.  they're going to do all sorts of stuff this year and the troop is going to focus a lot more on being girl-led since they're getting older.  they voted on what badges to work on and talked about what they need to do to work towards earning their silver award, and it sounds like it'll be a pretty great year.  i still can't believe she's in this tan vest, though.  when she was itty-bitty and still in the daisy tunic and then the brownie sash, the girls who wore this vest seemed so much older...and now she's one of them.  sigh. 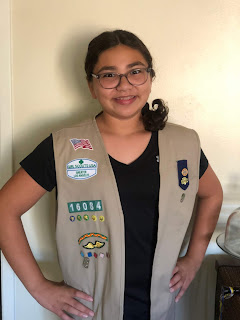 i ventured upstairs after school one day this week to meet up with her in the library, and stood there for a good five minutes before she realized i was there.  i hadn't seen where her locker was at that point, so it was kind of fun to see her in action and watch her interact with her friends for a few minutes. 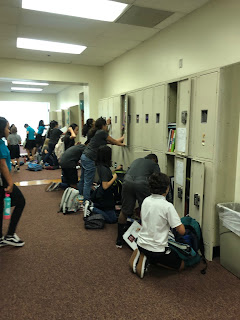 i wasn't trying to be a creepy stalker or anything, and a couple of her buddies walked by and smiled and said hello to me, and i even managed to introduce myself to one of her teachers when she caught my eye and asked if i needed any help.  we've been at this school for quite a long time by now, but junior high was always a whole different animal and i'd never met the majority of the teachers on this side of campus before.  they don't even need room parents in junior high, so i'm not going to be as involved as i was before, and it struck me that she really is growing up and things are definitely changing as we transition to the next stage of her life.  it's exciting and sad at the same time.

her first small group project for one of her classes involved making tinfoil hats for her and the two other girls in the group.  we were cracking up as she realized that she looked like our little gnome: 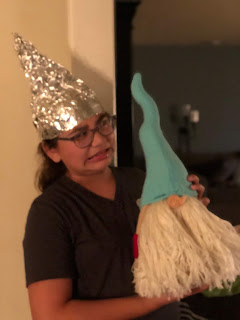 and i'm getting used to spending my days solo at home again.  well, mostly solo - i've got these two knuckleheads to keep me company, and they alternate between fighting over toys and cuddling up for naps.  we're finding our groove and i'm figuring out how to get things done while keeping an eye on them at the same time. 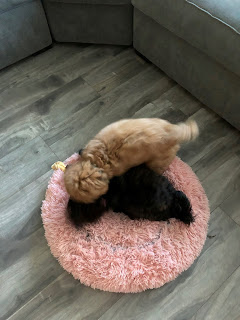 this morning, on my way to an early orangetheory class, ryan seacrest was on my radio making a "free gas friday" announcement.  they pick a gas station in the l.a. area and the first 102 folks who get there get to fill up their tanks for free.  pretty cool, right?  and this time, the location was in nearby la verne.  it was 6:00 when he made the announcement, with the gas pumps scheduled to open at 7.  the old lady sent me an excited text right as he said it, and while i knew i couldn't go (we have to leave the house by 7:30 to get the bean to school on time), i encouraged her to give it a shot.  after all, the station wasn't too far from home and if they were all out of freebies, no big deal.

i was already home with the dogs and waiting for the bean to finish getting ready when the old lady sent this: 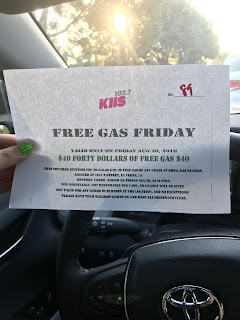 number 89!  we were pretty surprised to find that there were still spots left over an hour after they'd announced the location.  she joined the long line and managed to get her free gas with a half hour to get herself ready for work.

the first full week of school done, free gas for the old lady, our first trip to this year's l.a. county fair later today and a nice long holiday weekend.  happy friday to all!

Email ThisBlogThis!Share to TwitterShare to FacebookShare to Pinterest
Labels: back to school, bean's a star, freebie fun