i actually have a bunch of stuff to share, but i'm kind of racing against time this morning.  a contractor for the local power company is in the back yard getting ready to replace a pole in the corner of the yard that's been leaning to one side since we moved into this house...almost a decade ago.  it's been quite the back-and-forth process trying to get this done and then they finally decided to do it - during the holiday season.  i have a ton of projects i really wanted to tackle today, but we're going to lose electricity for pretty much the whole damn day.  yarg.

so instead, i'll share with you some fun puppy pictures.  i'd found these adorable "my first christmas" shirts for both dogs, and unlike their halloween costumes they seem to be perfectly happy wearing them.

oh - also, teddy got neutered last week, so he's been sporting that funny travel pillow-looking thing for days.  they tried putting the regular cone o' shame on him, but he looked so dang sad i broke down and bought him a more comfortable one that he could actually see out of.  doesn't he look like a supermodel? 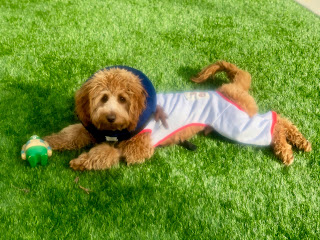 the outfit is hilarious, with his little furry butt hanging out and the pants legs that are almost too short.  and look at his backside! 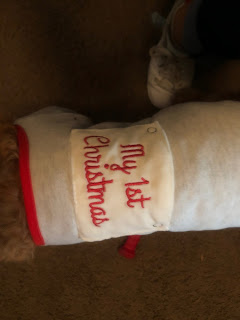 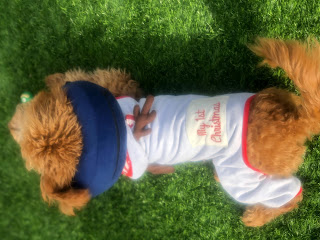 cocoa got a cute little shirt too.  i'm actually shocked that between teddy and stevie, that pompom on the hood hasn't somehow disappeared yet. 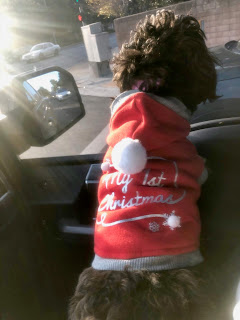 it was funny to watch them attack the old lady when she came in the house one morning: 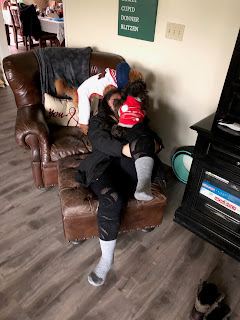 and both dogs got groomed this week.  while cocoa refuses to let me get a decent picture of her, teddy is a little less difficult. 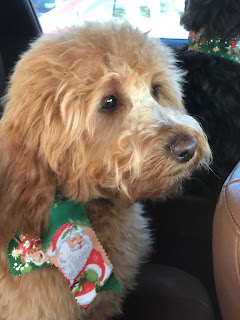 well...just lost power.  yay for the hotspot on my phone and unlimited data!
at December 11, 2019